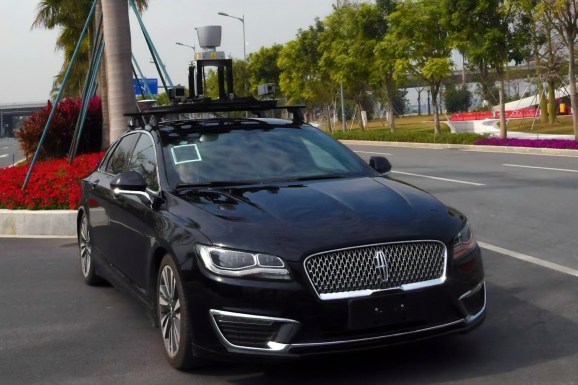 One of Pony.ai's self-driving cars.

Guangzhou, China-based self-driving startup Pony.ai is in line for a capital infusion from Chinese game publisher Kunlun. As spotted by TechCrunch this morning, Beijing Kunlun Wanwei, which has also backed Musical.ly, live-streaming company Inke, dating app Grindr, and microlender Qudian, revealed this week in a filing with the China Securities Regulatory Commission (CSRC) that it plans to invest $50 million in the driverless car company for a 3% stake.

Pony.ai confirmed to VentureBeat in an email that the capital contributes to its pre-B financing round. The company previously raked in $102 million last July from lead investors ClearVue Partners and Eight Roads (Fidelity International Limited’s investment arm), bringing its total raised to $214 million and bringing its valuation to over $1 billion.

Since last January, Pony.ai has tripled its headcount, conducted pilot tests in the Bay Area and China, and rolled out autonomous cars in Guangzhou (the site of its Chinese headquarters) that have given thousands of rides. It’s also secured an autonomous vehicle testing license in the city — only the second granted by the government — by logging more than 3,107 miles, demonstrating 39 capabilities across six categories of tests, and completing 10 days of “holistic” safety and operations evaluations.

CEO James Peng, the former chief architect at Chinese search engine Baidu, cofounded Pony.ai in 2016 with Tiancheng Lou, who worked at Google X’s autonomous car project before it was spun off into Waymo. The pair aims to build level 4 autonomous cars — cars that can operate without human oversight under select conditions, as defined by the Society of Automotive Engineers — for “predictable” environments, such as industrial parks, college campuses, and small towns, with a tentative deployment window of 2-3 years from now.

Pony.ai has competition in Daimler, which last summer obtained a permit from the Chinese government allowing it to test self-driving cars powered by Baidu’s Apollo platform on public roads in Beijing. And it’s just the tip of a very big iceberg — startup Optimus Ride announced it would build out a small autonomous shuttle fleet in New York City, following news of driverless car company Drive.ai’s expansion into Arlington, Texas. Waymo, which has racked up more than 10 million real-world miles in over 25 cities across the U.S. and roughly 7 billion simulated miles, in November 2018 became the first company to obtain a driverless car testing permit from the California Department of Motor Vehicles (DMV). Other competitors include GM’s Cruise Automation, Tesla, Zoox, Aptiv, May Mobility, Pronto.ai, Aurora, and Nuro, to name a few.

But there’s plenty of money to go around in China’s goldmine of a market. According to a McKinsey report, self-driving vehicles and mobility services in the region are expected to be worth more than $500 billion by 2030, when roughly 8 million autonomous cars hit public roads. “I truly believe the next major challenge for autonomous cars will be small- and medium-scale deployment,” Peng said in a previous statement. “[T]his is an absolutely critical step to validating the system’s overall stability and reliability.”