Above: Tina Perez and Madison Mann have signed with Gen.G’s Fortnite team.

Edelman: If you’re familiar with the game League of Legends, it’s a five-on-five game in the professional mode. You can think of it as similar to basketball. There are five roles, just like five positions on a basketball team. But imagine, at the beginning of a basketball game, that each team could decide which members of the other team are not allowed to play in that game. And they have to pick the positions and the people who are going to play on their own team for the duration of the game.

That’s what happens in League of Legends. A team decides, “You can’t use these characters for the whole game, and we’re going to pick the characters we’ll be for the whole game.” As a result, that part of the viewing experience is often as interesting and full of drama as the gameplay itself. Again, there are unique dynamics. Thankfully, there’s an increasingly exciting number of people who’ve been playing games for a long time, and in addition to playing games, have been producing video for a long time. They’re able to tell these stories. But the demand for this talent and experience is outpacing supply so far.

GamesBeat: Frank, you have different things to wonder about, like which games to pick and put into an arena, what’s going to work in a physical arena. Is battle royale going to work in something like what you guys have?

Ng: We try to be a platform provider. We try to create an ecosystem for every part of the industry. That’s why we’re building out our network around the world. This is just one of the many properties I have. There are others in China and Australia. We also have an esports broadcast truck. We have a lot of people who know how to organize esports events.

We try to take an agnostic approach. We try to work with everybody. We’ve worked with Riot, EA, Blizzard, and many other companies. At this early stage in the industry, we want to create content brands that are agnostic to any specific game. I was in the publishing business for 15 years, so I’m trying to do something different at this early stage of the esports business. I’m trying to be a platform provider, to create a different process we can go through. 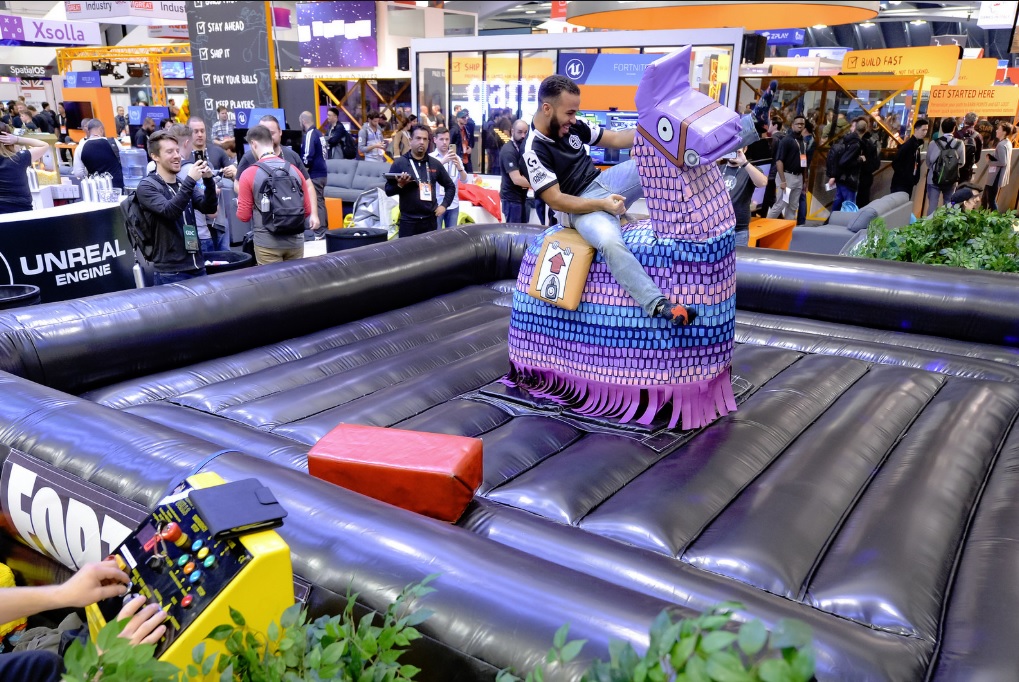 Above: A scene from the Fortnite/Epic booth at GDC 2019.

Battle royale, to go back to that part, is actually a very good format. It’s just like poker. Anyone can be a winner. If you talk to any of your kids or nieces or whatever who play Fortnite, or any battle royale game, they’ll probably tell you that they’ve won maybe one, two, three times. Almost anyone will tell you that. It’s just like a poker tournament. You can play a thousand times and maybe get the big check once. It’s created a much bigger audience right now.

People may say that there’s a different way of creating content for the battle royale format, because you don’t have specific teams. Even with squads, it’s different. When we did the Ninja show, it was a battle royale game, Fortnite. It was before they even had the spectator mode. It was back when 20 players would go into the game and the first thing they do is shoot themselves and become ghosts to start following the big players.

The beauty of battle royale is that it brings a much bigger audience that can get engaged in the process. What we did with Ninja is we made him the center, the main character of the show. Unlike any other tournament–in a League of Legends broadcast you’ve got 10 people, five on five, so where do you want to focus your content? It’s hard. But for us, it was simple. It was just Ninja all night long, for seven hours. We had other big streamers, but they were all the supporting cast. Every moment was about Ninja. That’s why we could properly monetize his own channel’s traffic, and that’s why we could build him.

Battle royale is a great thing to appeal is a much bigger audience. Plus, battle royale is moving to mobile phones. Many games are offering that now. That’s really building the market.

Edelman: The idea of trying to figure out how to appeal to gamers–the reality is that most competitive-minded gamers play one game primarily, competitively. They play others, and they might get to be good at those games, but as far as where they focus the majority of their hours, where they’re grinding to get better and watching content to learn, it’s almost always around one primary title. That’s why, in Frank’s business and mine and others out there, the idea of being able to create a mechanism to allow communities to develop around multiple game titles simultaneously is very important, if you don’t own the games yourselves.

That connection, which ends up leading to the creation of exciting content, is what’s starting to drive the growth of the industry. The way that players engage when they’re playing competitive video games together, in person, is just like what you would see in any other sport that comes to mind.

The positivity of gaming shines through when players are together in person. They get better at the game faster than when they play on their own. They don’t exhibit the kind of poor digital citizenship that you hear about a lot in online communities, where toxicity is a major issue. When players sit next to each other, they’re not toxic. They’re there to have a good time, to be friends, to form teams, to find other players they can learn from and play with on a continuous basis. That ability to create a platform across skill levels and across titles, particularly in visible locations, is a real driver of content creation and interest in content consumption.