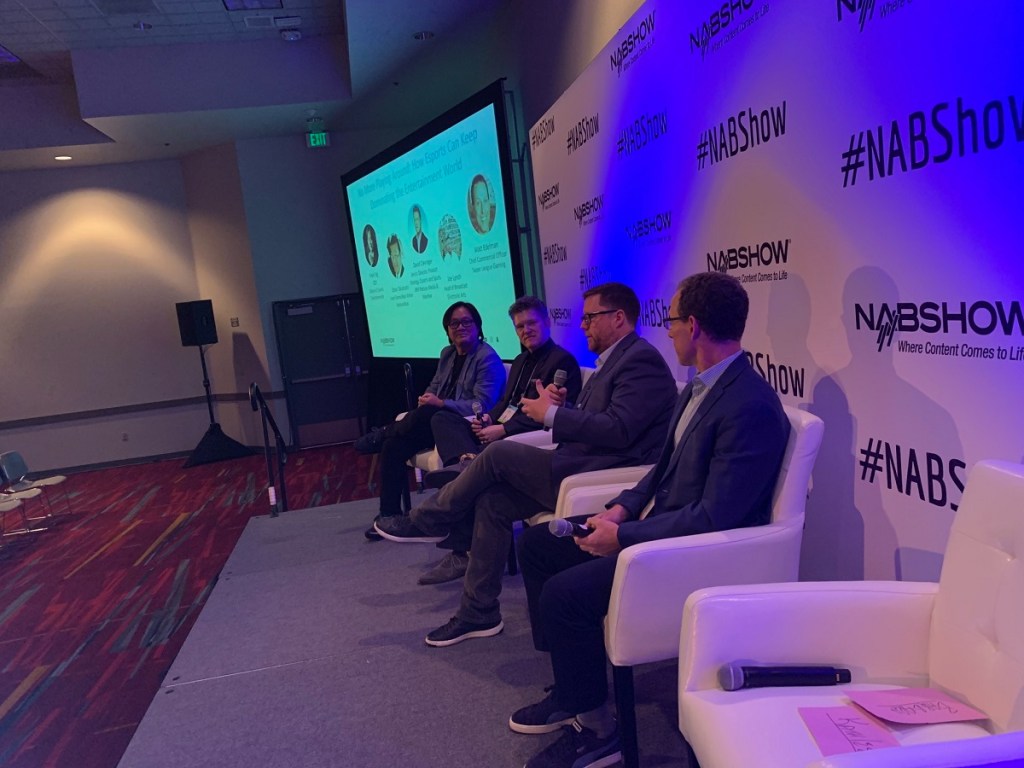 GamesBeat: I want to get a bit focused on broadcast tools as well, and where technology could take them. There are a couple of recent examples, like where Twitch announced their Squad Play technology. Four players can join together and play a game like Fortnite as a squad there, broadcasting as a single stream. They don’t have to be in the same location.

Google has also talked about its Stadia cloud gaming platform. They brought up the example of a YouTube streamer who could be broadcasting a game, and you could click on a link to go into the game where that YouTuber is playing. Interesting developments can happen with technology. I’m curious about where you think broadcast tools for esports should go in the future.

Lynch: The main point is that there is no road map. With traditional TV there are lots of limitations on what we can do, how we can broadcast, how people can get involved, whether it’s in the living room or wherever. Right now we’re at a point where almost anything is possible. As long as you can figure out how to code it, you can do it.

We have a lot of conversations, whether it’s with Twitch or YouTube or our own dev teams or whoever makes these different games. “We have this crazy idea. What do you guys think?” To the point about what Twitch just came out with, the viewer wants to be in control. They want to be able to see what they want to see. They want to follow this person or that person. They want to enjoy their content their way. We want to do a really cool show that people will enjoy, but at the same time give them the opportunity to choose their own adventure, to do the thing that they want to do.

For me, it’s about how we can do whatever we want. It’s not so much what came out today. All that stuff is very cool, but it’s about, “Hey, we have this cool idea.” There’s a new battle royale coming out, and we’re starting to talk about what we could do to tell that story better. What could we take from traditional sports and combine with things that might not be available on traditional TV a couple of years ago, or even today? Because of the way things are working with Twitch and Facebook and YouTube, we can add on and plug in all these new things. The sky is the limit.

Edelman: We have a different challenge than Joe. When our events are happening in multiple locations around the country, simultaneously, we have dozens if not hundreds if not thousands of matches being played at the same time. The teen sitting in Topgolf in Las Vegas is interested in watching gameplay that’s relevant to them, while the teen that’s playing in a movie theater in Los Angeles wants to see gameplay that’s relevant to what they’re doing, and the teen in a Dave and Busters in New York wants to watch what’s interesting based on what they’re doing, all at the same time. We have a lot of those crazy ideas, and we have to challenge ourselves to figure out how to entertain viewers and players through all of those experiences simultaneously.

One of the really interesting things that esports has brought to life very quickly, in a way similar to traditional sports, is the use of all the data that surrounds the gameplay experience. The way our systems work, we’re broadcasting gameplay that’s unique to the players in each location, all simultaneously, and also broadcasting gameplay that’s interesting for a national audience on Twitch. While all of that is happening, yes, the gameplay is different for each distribution point, but so is the data that surrounds the gameplay, the data showing who is succeeding in each venue.

Who are the leading scorers in Las Vegas versus Los Angeles versus New York. Who are the leading scorers nationally, if you combine them all? What stage of the match are you in, if you’re in Los Angeles versus New York? All that data comes from partnerships with publishers who make that data available in different forms, through APIs or other mechanisms. Some of it has to be manual. But the ability to create that dynamic experience, for us, has become crucial. Otherwise, people in Los Angeles are watching gameplay based on players competing in New York, and that’s not fun. 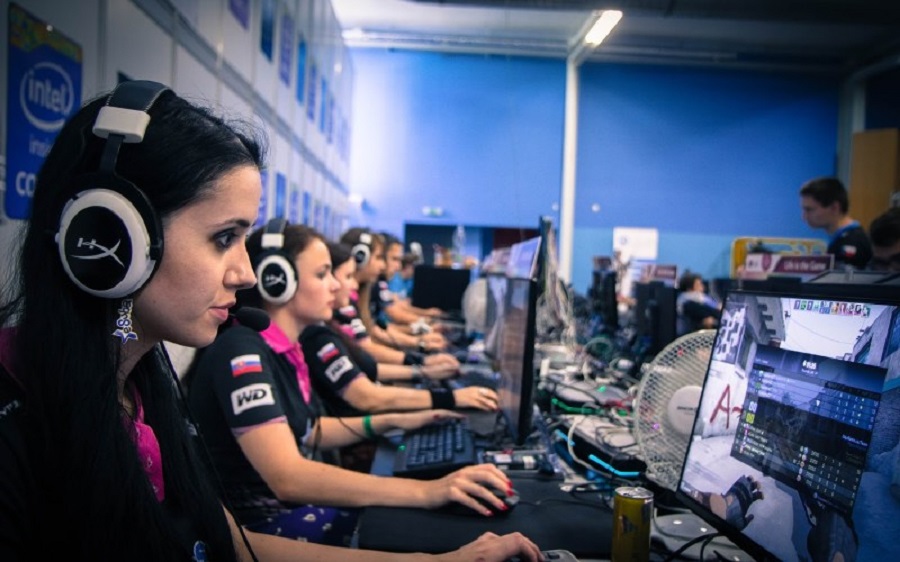 Above: Female players are changing esports and broadening its appeal.

GamesBeat: I’m sure IBM likes all that data.

Edelman: We’ve finally cracked one of the things that we’ve talked about elsewhere here, which is the redzone experience. If we have a team of 50 players in two different locations, there might be anywhere from 10 to 50 matches happening simultaneously. We can put five, six, seven, eight, nine matches up on the screen simultaneously. Multiple players can all enjoy a spectating experience on the match that they’re engaged in. Someone locally, in a venue, or someone centrally, in a control room, can bring any one of those matches up to be full screen at any point in time during the experience.

We were talking about how incredible it would be to be able to add highlights into that experience. While I call it the redzone–I’m not yet able to show you the most exciting point in each of those matches. I can just show you all of them happening at the same time. What if we actually could pull up, across five matches at once, the most exciting moments in all of those matches, and that’s what goes on the screen at a venue? It would be transformative. That’s where the access to data and the development of technology with companies like IBM can really take the broadcast experience to another level.

Clevinger: Some of the work we’ve done in the traditional sports space, and also other verticals as well, is pertinent to this. As an example, what we’ve done recently with the Masters, the golf tournament, which we also sponsor — we’re partners with Augusta — we were able to take in not just the match data, but also the audience, the crowd noise, and the commentators as well. We would run an analysis against all of that and generate an excitement score, based on how loud the crowd at the venue is, how excited the announcers are, and on the gameplay data. Whether we’re talking about traditional sports or esports, we can use that and know what is a critical moment in the match.

The thing I’m trying to build, that I’m trying to get to, is the excitement you feel when you watch the ESPN Sportscenter Top 10 at night. Somewhere in that mix is maybe a Little League match or a regional amateur event, but it’s always some fantastic experience that makes it into their top 10. What if that happened every day, all day long, in esports?

We’re talking about the ability to get to that, to make that correlation. Every event that Frank runs, every event that goes on in Super League, everyone who’s playing in a FIFA match, you can make a correlation between all of those things and start to create that sort of experience, which is above and beyond what we’re able to do with traditional sports, because they’re just harder to be able to break down. But with machine learning and being able to process that data, we’re building toward an inflection point where we’ll see the fruition of that. At the team level, at the publisher level, it’s going to create this groundswell. I’m sure we can figure out some way of bringing that to the in-venue experience as well.

Ng: I can also share some of the experience that we have. The one person who made poker broadcasting work is the person who invented the hole camera. Without the hole camera, there’s no poker on TV. We understand the importance of technology in the broadcast process.

That’s why we have different aspects to our platform. We have our handicap system that allows tournaments to take place and makes them more interesting. We also have streaming and simulcast features that we’re working with. It’s extremely important to focus on technology, because that will change the whole experience of watching.

I can share one fact that I strongly believe, which is that traditional broadcasters will play a different role in this process. In the future, there will be a single experience, with broadcast and live streaming on the internet, together as one unified experience that will be offered to the audience. Everyone has their role to play in this. But they should not be competing. They should be working together to create the experience that’s yet to come.

Clevinger: You have a recent example of broadcasting esports, right, with ESPN?

Lynch: Right. We just did a new series on ESPN called Road to the Madden Bowl. As we look at how we’re putting these events forward–we do a lot of live events, which are great, and we get a ton of viewership. What we’re trying to do now is tell more stories. As the viewership has grown year over year–the way we do that is get people invested in the players. You have to know who you love, who you hate, who you root for, who you root against. We’re creating shows and content, and you guys are as well, to drive that fact home and get people to understand who these people are.

Right now we have the Madden Championship Series, which is the full Madden 2019 series. We’re doing a four-episode series hitting each of the majors leading up to the Madden Bowl, which is going to air live on ESPN. The team at ESPN has been great about working with us and figuring out the best way to move this forward. We have what we’ve done traditionally, but now we have ESPN, ESPN2, ESPN News, Disney XD, all these other different venues. How can we pull all these levers and create something new?

To Frank’s point, part of what makes ESPN a great partner for us right now is understanding that we’re in the middle of a reinvention at the moment. What are we doing? Where are we going? What is this thing going to turn into? Companies like that are all in. “Let’s figure it out. Sure, we’ll try that.” Some people aren’t, and those people are going to be left behind.