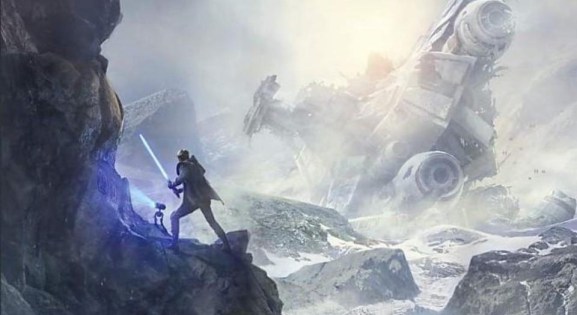 Respawn Entertainment showed off their upcoming game, Star Wars Jedi: Fallen Order, during a reveal event at Star Wars Celebration today in Chicago. It is coming out on November 15 for PlayStation 4, Xbox One, and PC.

The game stars a Jedi Padawan named Cal Kestis that survives Order 66, which killed most of the Jedi during the events of Star Wars Episode III: Revenge of the Sith. Fallen Order will focus on combat. The debut trailer highlights the title’s story, and it shows Cal hiding and trying to survive in an Empire-run galaxy.

It certainly has a lot of stuff you expect from Star Wars: aliens, droids, lightsabers, and a baddie wearing black. The debut panel also introduced actor Cameron Monaghan, who will be playing the part of Cal through voice work and performance capture. The game also introduces a new type of Stormtrooper called Purge Troopers.

Fallen Order will be a single-player, story-focused game with no microtransactions. This is a departure from publisher (and Respawn owner) Electronic Art’s mandate for the past few years that required all games to have live service elements. EA was against experiences that people would play through once and then be done with. That doesn’t give EA a chance to make money off of post-launch content or things like loot boxes.

No microtransactions. No loot boxes. And no, we won't be adding them. A single-player Star Wars story for those of you who are ready to become a Jedi. https://t.co/kTheWVBjJc

A new hope (and change of heart) for EA

But EA’s attempts at live services have been rough. Their last major Star Wars game, 2017’s Battlefront II, received a wave of criticism for its pay-to-win microtransactions. EA’s last major release, BioWare’s Anthem, is an online multiplayer game. Its launch has been plagued with bugs and other issues, and a recent Kotaku report revealed the title’s rocky production.

Fallen Order will be the kind of EA and Star Wars game we haven’t seen in a long time, one that focuses on a single-player story. And EA and Respawn are both touting that fact often and loudly. Respawn noted that its team includes people who have worked on story-based series like Uncharted and BioShock.

Contrast to most of EA, Respawn is in a great place. Its last release, the free-to-play battle royal Apex Legends, became a quick hit when it launched on February 4. It already has over 50 million players.