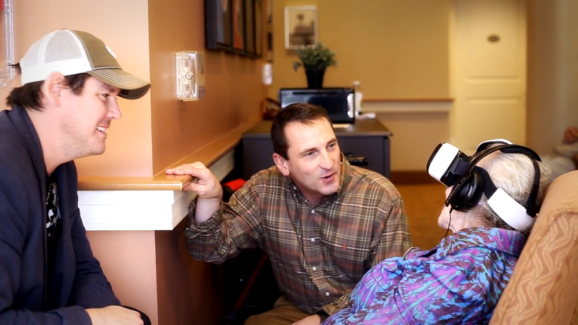 Nearly two years ago to the day, we first wrote about MyndVR. It’s a VR platform designed for use by elderly people, giving them a raft of content to enjoy, like a Frank Sinatra tribute show. This week, though, MyndVR is expanding its mission with the help of HTC.

The company is now rolling out MyndVR 2.0 in partnership with HTC’s Vive X accelerator. The company joined the initiative back in January. Whereas previous versions of MyndVR were used on mobile-based headsets, this latest edition runs on HTC’s standalone VR kit, Vive Focus. The device is Mynd-branded and comes with a tablet that can control VR experiences, for the user by carers.

MyndVR mainly consists of 360 video content, so it won’t take advantage of Vive Focus’ positional tracking. Using a standalone device rather than a headset that requires a smartphone is, however, much more convenient.

“The ease-of-use with HTC Vive’s Focus enhances the user-experience and helps provide a world of immersive content for seniors who are no longer able to physically travel,” co-founder Chris Brickler said in a prepared statement. “We are lifting the spirits of our elders and taking them far from the four walls of their care communities.”

It’s a curated platform, one that its founders envision as a sort of Netflix of VR content for a certain demographic. MyndVR doesn’t make this content itself but instead partners with the likes of Disney to purpose existing 360 degree content for the platform.

The platform is already up and running in 20 states across the US as well as Canada. You can head to an official website to learn more.