Two Bit Circus has opened a “Park as a Platform” program to enable game developers to create location-based entertainment more quickly and easily.

During its development, Two Bit Circus‘ founders Brent Bushnell (son of Atari cofounder Nolan Bushnell) and Eric Gradman realized that some traditional approaches to game development were slowing innovation and hindering the ability of developers to get their content out into the world, particularly in location-based entertainment.

To support the developer community and increase the potential for innovation, Two Bit Circus is launching its Park as a Platform in downtown Los Angeles.

“Getting a game in front of the public requires a lot of resources that many developers don’t have access to,” said Eric Gradman, cofounder of Two Bit Circus and chief technology officer, in a statement. “Imagine the possible variety of public games and experiences if more developers had the resources to explore LBE. We hope that by erasing some of the obstacles and encouraging the community, we can support developers and increase the diversity of fun.”

This new program is designed to provide developers with a streamlined approach to adapting games and experiences for location-based entertainment (LBE). Developers in the program will be able to leverage Two Bit Circus’ 38,000 square-feet “micro-amusement park” as a physical development and publishing platform. 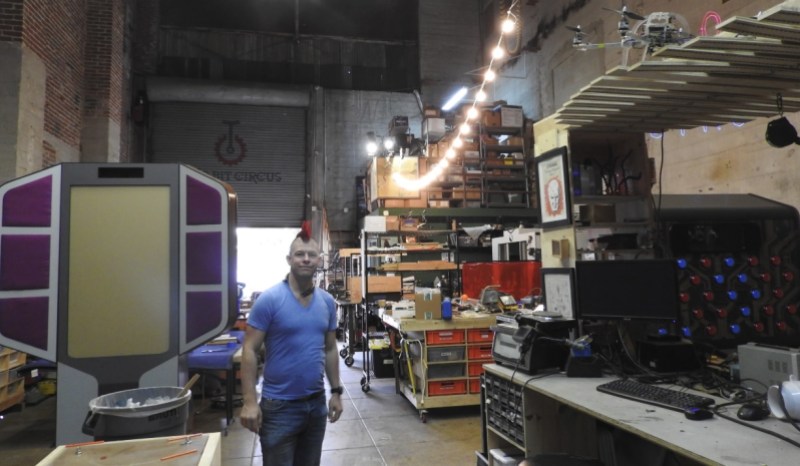 Above: Eric Gradman at the Two Bit Circus’ former headquarters.

Through the Park as a Platform Program, Two Bit Circus aims to smooth the path to public exhibition and create a test lab for both large and small developers, ultimately allowing the world access to a greater variety of social gaming experiences.

As a first step toward entering the Program, developers are invited to submit their products to be featured at one of Two Bit Circus’ Beta Nights — where enthusiastic locals come out to play and test new content. The Two Bit team reviews submissions to find games with the potential to create great new experiences and get people playing elbow-to-elbow. With a community of support, Two Bit Circus aims to encourage developers, increase the potential for innovation, and ultimately allow the world access to a greater variety of engaging and social gaming experiences.

The Park as a Platform Program is being announced at Gamesbeat Summit 2019.