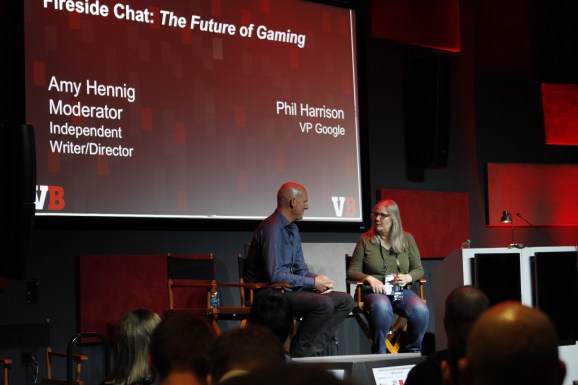 With Stadia, Google is trying to change the way people play games. And if the upcoming cloud gaming service takes off, the company hopes it’ll fundamentally change how developers make their games, too.

Google vice president Phil Harrison (who’s overseeing Stadia) and veteran game designer Amy Hennig spoke about the future of gaming at the first day of the 2019 GamesBeat Summit. One topic they touched on was how cloud-based technology can benefit both players and game designers. By offloading processing to Google’s data centers, developers won’t have to worry about targeting a limited range of technical specifications (as they would on console, PC, or mobile).

They can be more ambitious with their ideas, taking advantage of the extra resources to create more immersive experiences.

“Now this transition to game development being cloud-centric will be a fundamental shift, but it will be a difficult shift as well,” Harrison cautioned. “This is not going to be the easiest pathway for every studio to go through.”

But those who do adapt and understand what that means will create new experiences that you can’t get from a game designed for a discrete box or console. For instance, Harrison said that multiplayer games can happen at a bigger scale because data centers have predictable Internet connections. But he’s also interested in using the cloud to change the way consumers perceive the value of a game, one that’s not driven by digital or physical retail stores.

He highlighted Stadia’s unconventional discovery tools, such as texting a friend a link to a Stadia game, giving them the ability to play it within seconds without having to download anything. Harrison hopes these tools will help more gamers find gems like Playdead’s Inside (one of his favorite games of the last few years), and encourage studios to continue making unique experiences.

Hennig also asked Harrison about what Stadia’s business model looks like, but he just reiterated what he said during the Stadia reveal at the 2019 Game Developers Conference: that Google would have more information later this summer on how people will buy games on the service. However, he did offer a small hint to the developers in the audience.

“Our platform, on a fundamental level, has been architected to support a very wide variety of monetization options,” said Harrison.