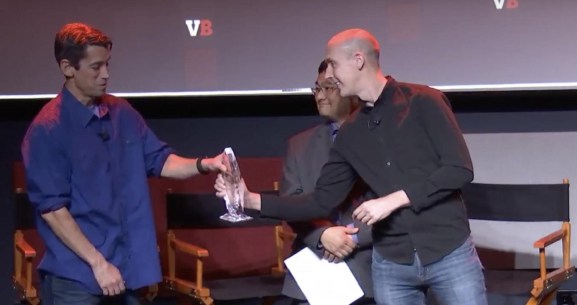 We pulled off a nice surprise by giving Ted Price, the CEO of Insomniac Games, our second annual GamesBeat Visionary Award. It was like our own little Easter egg inside the GamesBeat Summit 2019 event in Los Angeles.

Price spoke with Morgan Webb of Bonfire Studios about crafting community and culture at a game company — something that Price has done for over 25 years. I recently interviewed Price about those 25 years, and it was a pleasure to go over the company’s history, starting with games like Disruptor and Spyro, on through last year’s smash PlayStation 4 hit, Marvel’s Spider-Man.

Above: Ted Price (left) of Insomniac, Dean Takahashi of GamesBeat, and Spencer Tucker of Scopely.

Webb and Price talked about keeping spirits high at a company over the long term, and establishing a goal of having a lasting and positive impact.

This was our second year for this award, and we chose it with a panel of peers that included Rand Miller (last year’s winner and cofounder of Cyan), Don Daglow, Bill Grosso, Brandon Sheffield, Beth Schulte, Perrin Kaplan, Mike Fischer, myself, and Henry Lowenfels. Scopely sponsored the award for the first time.

Price won not only for his company’s great accomplishments in games, but also because he built a company that has a healthy work environment. And he also selflessly dedicated himself to the Academy of Interactive Arts & Sciences, the group that puts on the annual DICE Summit and the DICE Awards, among other things.

And Price has shown leadership by taking a stand on important issues, like when he published a video opposing President Trump’s Muslim immigration ban.