Analysts had expected Microsoft to earn $29.8 billion in revenue and report earnings per share of $1.00. The company thus easily beat expectations. The company’s stock was down 0.34% in regular trading, but up some 3% in after-hours trading. Microsoft said it returned $7.4 billion billion to shareholders in the form of share repurchases and dividends during the quarter.

“Leading organizations of every size in every industry trust the Microsoft cloud,” Microsoft CEO Satya Nadella said in a statement. “We are accelerating our innovation across the cloud and edge so our customers can build the digital capability increasingly required to compete and grow.” 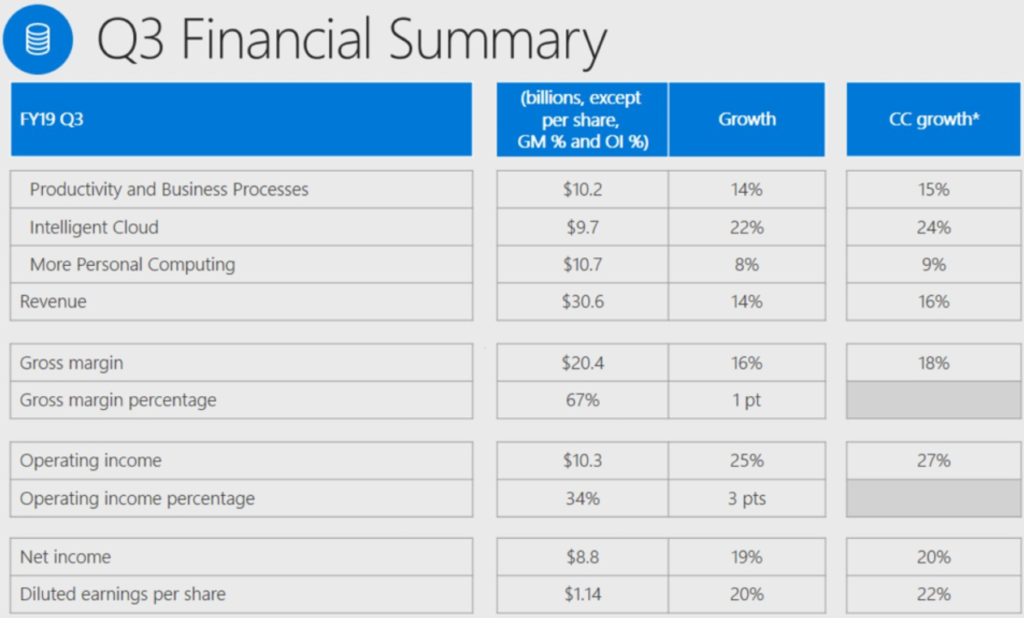 34.2 million consumer subscribers of Office 365 is significant, but it naturally pales in comparison to the enterprise side. Microsoft now has more than 180 million monthly active Office 365 business users.

Microsoft has successfully monetized its LinkedIn acquisition, which closed in December 2016. Various divisions at the company are still figuring out how they can integrate with the platform.

It’s not clear whether Microsoft can do the same with its $7.5 billion acquisition of GitHub, which closed in October. Microsoft is including GitHub numbers under its Intelligent Cloud division (specifically under server products). We expected the company to break GitHub out this quarter, but that didn’t happen, presumably because revenue there is not significant enough.

Surface continues to bring in $1 billion quarters. While Q2 was a $1.86 billion quarter, Q3 saw $1.33 billion from Surface. Earlier this month, Microsoft held a Surface Hub event in New York City, where it announced the Surface Hub 2S will ship in June, starting at $8,999 and going up to nearly $12,000. Price tags like that could certainly juice up Surface revenue to the $2 billion range.