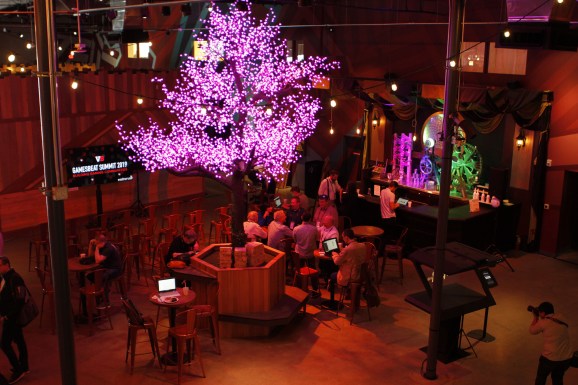 Two-Bit Circus sure makes for a pretty conference venue.

Day 2 of our GamesBeat Summit 2019 kicks off this morning at the Two-Bit Circus micro-amusement park in Downtown Los Angeles.

As with Tuesday’s program, we’re streaming live from our two stages — Boss and Hero. The action starts on the Hero stage at 9:15 a.m. (all times Pacific) with opening remarks from our co-emcees, Andrea Rene and Tommy Tallarico. Tallarico is bringing back the Intellivision with Intellivision Lives, and he’d the founder of Video Games Live (an orchestral spectacular that celebrates video game music). Rene, a longtime member of the media, is coming back in her second year of hosting our events and is a founder of “What Good Games” show.

You can see the schedule for both stages here. The day’s talks end at 4 p.m., with a break for lunch at noon.

Day 2 sees about the business side of gaming. Agenda highlights include Warner Bros. Interactive Entertainment’s David Haddad on “The Wisdom of Owning Games Studios” at 10 a.m.; Tallarico and bringing back the Intellivision and dealing with game communities at 2:20 p.m., Riot Games esports boss Chris Greeley on creating multigenerational esports at 3 p.m., and the future of blockchain and gaming with Bitcoin Foundation’s Brock Pierce at 3:40 p.m wraps up the day’s sessions here.

And YouTube’s head honcho for gaming and virtual reality, Ryan Wyatt, will take the stage for “The Future of Influencers and Game Videos,” and he’ll be doing a Q&A session at 3 p.m. on the Hero Stage.

Our second stage, Hero, is streaming on our Twitch page. The highlights of today’s schedule are Raph Koster, Chris Taylor, Michael Condrey  .

Taylor’s known for excellent strategy games such as Total Annihilation and Supreme Commander, the latter from his Gas Powered Games studio. He’s announcing his next game onstage at 10 a.m.

Condrey left Call of Duty studio Sledgehammer Games and in February announced the launch of a new 2K Games studio in Silicon Valley. He’ll talk about this and working on one of the biggest franchises in gaming with Dean.

Koster a legendary online game developer. He’s the lead designer of Ultima Online and the creative director for Star Wars: Galaxies. At 2:20 p.m. Pacific, he’ll be talking about “Dealing with Gamers Across the Decades” with startup coach Amy Jo Kim. Koster has been around online gamers since the dawn of the MMORPG era, so he no doubt has plenty of good stories and tactics to share.

At 3 p.m., we’ll have the Q&A session on influencers and game videos with YouTube’s Ryan Wyatt.