While consumer AR/VR is proving itself, enterprise AR/VR is already delivering strong return on investment for major corporations like Walmart, Lockheed Martin, and Verizon. But the market remains a series of connected point solutions, not a fully functioning ecosystem (yet). As major players like Microsoft build toward an end-to-end stack and win half-billion dollar contracts from the US military with HoloLens 2, we’re still in the earliest stages of what we call the “Enterprise Reality Ecosystem.” How is enterprise AR/VR driving ROI today, and what else does it need to scale across platforms? 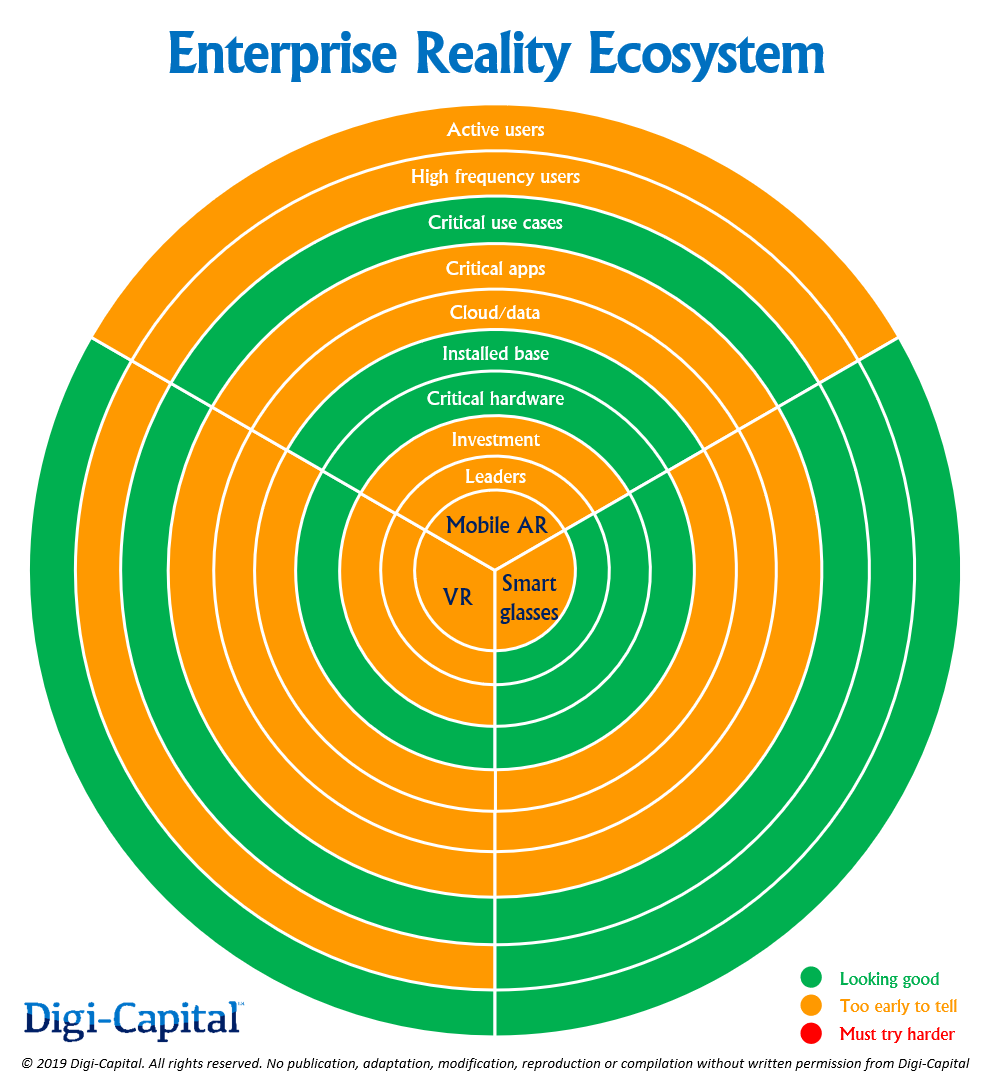 Above: The Enterprise Reality Ecosystem, by Digi-Capital

(Note: this qualitative analysis is based on discussions across the industry extracted from Digi-Capital’s Augmented/Virtual Reality Report Q2 2019, and will be updated as the market develops)

For the Enterprise Reality Ecosystem to thrive, it needs active users. Lots of them. Not hundreds of millions to billions like a consumer ecosystem, as even a wildly successful enterprise platform like Slack has just 8 million active users today. For our purposes, we’re talking about hundreds of thousands to millions of active enterprise AR/VR users.

The largest installed base for smartglasses today is Microsoft HoloLens 1, reported at 50,000 across all enterprise customers (note: active users is a different number, due to both multiple enterprise users per device and device attrition). The launch of HoloLens 2 and Microsoft’s 100,000 headset US Army contract could more than double this figure in the short term, taking its number of enterprise smartglasses active users into the hundreds of thousands.

Other enterprise smartglasses companies like Vuzix are in the tens of thousands, while Google has not discussed numbers for Google Glass for Enterprise. Recent industry surveys indicate Microsoft HoloLens (even before HoloLens 2 was announced) is seen by the industry as the market leader. (Note: Magic Leap is often discussed in creator/consumer terms, but it also supports enterprise)

Consumer VR is largely a games/entertainment market, particularly in light of comments from John Carmack of Facebook/Oculus. Yet VR headset makers and startups are also focused on enterprise. Enterprise VR active users (note: again different to installed base) are beginning to reach critical mass in the training vertical in particular. Enterprise VR training company Strivr partnered with Walmart to roll out 17,000 Oculus Go headsets loaded with its software to 4,700 stores and 1 million employees, as well as Verizon using it to train 22,000 employees across the US.

One of the veterans in the enterprise VR space, Ford (led by former Immersive Realities Tech Specialist Elizabeth Baron) developed its own Ford immersive Vehicle Environment (“FiVE”) system back in 2012, and has seen usage grow 50% annually ever since. Over 10,000 staff used it in 2017 across engineering, design, user experience/ergonomics and performance (motorsports), with over 1,000 “product health” reviews in seven countries.

Nonetheless, PTC Vuforia EVP Mike Campbell says that it has “over 630,000 registered developers and 5,000 enterprise AR customers today, with 85% of Vuforia Studio usage on mobile AR and a $20 million software only (no services) business.” Those figures are pretty encouraging, and enterprise mobile AR has potential to grow active users far beyond its current base.

For enterprise AR/VR to succeed, it needs to become an indispensable, everyday business tool. Solutions that are used all day, every day, are why companies like Microsoft, Salesforce, and Slack are so valuable in the broader enterprise IT space. High usage frequency is a good yardstick for the value of enterprise AR/VR solutions.

Upskill CEO Brian Ballard points out that type and frequency of use for enterprise smartglasses depends on use cases, “In manufacturing and logistics, we have most customers applying Assisted Reality (HUD-style) smartglasses in all-day, every-day use, sometime across multiple shifts. In field services, we see smartglasses predominantly used in exception-based repairs.”

The largest rollouts of VR in enterprise have been in training, which by its nature is an occasional activity for most staff. There are other enterprise VR use cases (e.g. design) where staff use it many times per day, but the jury is still out on high frequency usage of VR broadly across enterprise. High frequency usage in mobile AR is also early in its development.

Lockheed Martin’s Emerging Technologies Lead Shelley Peterson explains that its “satellite operations have used HoloLens 1/Scope AR to reduce training time by 85%, as well as dramatically cutting operating times across alignment (-34%), Design for Inspection (“DFI”) (-39%), drilling (-46%), torque (-50%), and cable fastener activities (-93%). Cost savings at this level are unheard of in the satellite industry.”

Getting back down to earth, BAE Systems division building electric battery propulsion systems for hybrid buses has used Microsoft HoloLens 1/PTC Vuforia to cut front-line assembly workers cycle times by 50%, training by up to 40%, all at a tenth of the cost of alternatives.

For operational capability/readiness, King County is seeing ROI from working with Taqtile’s Manifest platform running on Microsoft HoloLens. Perhaps the most significant benefits have come from transferring and codifying institutional knowledge from a retiring workforce to new workers.

Remote collaboration is emerging as another way that enterprise ROI is being delivered, with smartglasses maker DAQRI CEO Roy Ashok describing how it “has enabled clients’ service departments to cut troubleshooting time by 60%, eliminating the cost of sending a technician entirely in many instances.”

Trimble has focused on the use of HoloLens for early identification of discrepancies between design and construction to reduce rework in architecture, engineering and construction (“AEC”) projects. Aviad Almagor, Senior Director – Mixed Reality and BCI, said that “using mixed reality for early resolution of clashes and coordination issues has saved clients weeks of work, prevented cost overruns, and schedule delays.” Trimble has also announced XR10 with HoloLens 2 bringing mixed reality to front-line workers.

In enterprise VR, Bell used HTC Vive to cut development time for its new FCX-001 helicopter from an industry standard of 5-to-7 years to just 6 months. While these time and cost savings are impressive, the increased competitive advantage and revenue growth from dramatically faster time to market are measured in the millions of dollars.

Strivr’s CEO Derek Belch explained how the company’s enterprise VR training solutions have enabled its customers including “Walmart to improve training test scores for 70% of associates, United Rentals to cut training times by 40%, Fidelity to grow customer satisfaction by 10%, and a Fortune 100 insurance client to reduce training times from 3 hours to 25 minutes.”

Integrated VR/CAD modelling company Mindesk has been helping AEC clients replace physical models with virtual ones. CEO Gabriele Sorrento said that this has resulted in customers “saving $2,000 or more per design phase, and delivering positive ROI straight away. Our integration with standard CAD software has also eliminated preparation/conversion between systems, cutting costs even further.”

Remote collaboration platform Streem is focused on using mobile AR to make enterprise expertise more accessible, enabling white goods and insurance company clients to cut up to 42% of service technicians callouts (“truck rolls”) and related costs. CEO Ryan Fink said this is achieved through, “using the customer’s smartphone camera to connect them to remote experts and call centers, while empowering the expert with more contextual insights than were possible before. This includes spatial mapping for accurate remote measurements, AR tools, and object recognition/OCR for automatic serial/model number capture, and context identification.”

Many smartglasses rollouts require a significant services component for implementation and compliance, while SaaS solutions can be simpler and faster to implement. Microsoft’s approach with an integrated suite of standardized enterprise solutions like Dynamics 365 is aiming to make enterprise implementation/compliance easier, and leverage the company’s decades of enterprise experience.

But even with strong progress across the market, enterprise customers tell us it is too early to make a call on critical enterprise apps for smartglasses, VR or mobile AR.

The Enterprise Reality Ecosystem needs a strong cloud backbone and data analytics/business intelligence to support decision-making. The enterprise AR Cloud is emerging with Microsoft Azure Spatial Anchors, as well as broad AR Cloud startups like 6D.ai and Ubiquity6. So despite its early stage, there appears to be a path forward for the AR Cloud to support both smartglasses and mobile AR.

There is less clarity for the enterprise VR cloud, although some have suggested blockchain as a solution. For enterprise AR/VR data analytics/business intelligence, Digi-Capital’s AR/VR Analytics Platform launched as the first dashboard solution to service this market at Google in mid-2018.

HoloLens 2 (and eventually 3) could scale from that base to millions of devices across industries, but it might take Apple launching smartphone tethered smartglasses and bring-your-own-device demand for enterprise smartglasses installed base to reach their inflection point. Digi-Capital first forecast Apple launching in late 2020 over 3 years ago, but only Tim Cook and his inner circle really know if and when that could happen, and what it might look like.

VR’s enterprise installed base has seen individual corporate rollouts in the tens of thousands of units for training (e.g. Walmart), but still has a way to go to scale more broadly across enterprise.

Mobile AR has an enterprise installed base in the hundreds of millions today due to the ubiquity of compatible and configured devices. Again this isn’t active users, which is a much smaller number today.

Enterprise tech platforms don’t just need critical use cases and apps, they need critical hardware to run on. As above, HoloLens 2 could become smartglasses’ first critical hardware, with other players competing for that title (again Magic Leap has been primarily consumer/creator focused, but is also positioning for enterprise).

VR’s high-end and mid-range headsets from HTC, Facebook/Oculus and others have been used by the enterprise community for several years now, with ultra-high-end VR headset Varjo also launching this year. iOS/Android smartphones/tablets already do most things that enterprise mobile AR users need without dedicated hardware, although rear-facing depth sensors could add functionality as they become more commonplace.

Investment is a key driver to fuel the Enterprise Reality Ecosystem, with internal corporate spend as important as VC funding of startups.

In the consumer smartglasses market, Digi-Capital’s AR/VR Analytics Platform tracked Magic Leap raising over $2.6 billion so far. In the enterprise smartglasses market, Microsoft’s internal spend on the HoloLens ecosystem could dwarf that number (note: Microsoft has not discussed a figure). This appears to be yielding results, with the company’s $480 million US Army contract the largest single contract with an enterprise customer to date.

There are strong players in specific parts of the enterprise AR/VR market, but only a handful of companies with resources and capabilities to lead across the stack (in a similar way to Apple in the broader smartphone market, not just enterprise).

For enterprise smartglasses, Microsoft’s HoloLens 2 and ecosystem look like the ones to beat in the Enterprise Reality Ecosystem. Google and Apple could challenge, but Google Glass for Enterprise is an indirect competitor in some ways, and Apple remains Sphinx-like. Magic Leap has been positioning itself too, so it will be interesting to see what it delivers.

For enterprise VR, HTC, Facebook/Oculus and Microsoft (with partners) are the contenders for full stack enterprise solutions leadership. Likewise Apple and Google for enterprise mobile AR.

Too early to tell

The Zhou Enlai quote about the French Revolution, “it is too early to tell,” is an appropriate summary of the Enterprise Reality Ecosystem today. Enterprise smartglasses, VR and mobile AR have solved parts of the puzzle, but each needs key pieces to become a true ecosystem in its own right. The focus, energy and talent focused on the challenge are formidable, so it’s going to be exciting to see where things goes from here.

(A big thank you to other great folks who helped in the research: Herb Schilling of NASA, JR Dawkins of Verizon, Jan Pflueger of Audi, Amar Dhaliwal of Atheer, Dirk Shart of Re’flekt, Marco Campanari of Hyperfair, Karl Maddix of Masters Of Pie, Florian Haspringer of Holo-Light and Daniel Seidl of Innoactive)