Nearly half of the world’s population is at risk of malaria, according to the World Health Organization, and there were close to 219 million confirmed cases and an estimated 435,000 deaths in 2017. Sub-Saharan Africa bore the brunt of the outbreaks and their aftermath — about 92% and 93% of cases and deaths, respectively, were concentrated in African regions. That’s because mosquito species in Africa, some of which transmit malaria through their bites, have longer-than-average lifespans and a preference for human blood.

Fortunately, researchers at Seattle, Washington-based nonprofit global health organization Path are committed to fighting the good fight against malaria, and they’re securing capital to accelerate their efforts. Today at World Malaria Day 2019 in Paris — an event jointly hosted by the RBM Partnership to End Malaria and the French government — the Tableau Foundation (Tableau’s philanthropic arm), live location platform company Mapbox, and data analytics providers Exasol and Alteryx pledged a collective $4.3 million over the next three years to help governments in sub-Saharan Africa eliminate the disease.

Path says that the grant will supply national and regional organizations in up to six sub-Saharan counties with real-time data and analytics tools that will “bolster decision-making” around malaria mitigation efforts. Additionally, it’ll fund training for “hundreds” of health workers and officials on the use of data to tackle malaria and other deadly diseases.

“Successful malaria elimination programs require accurate data that moves faster than the disease itself — to help shorten the distance and time it takes to find and treat cases, and even to predict risk and direct resources before cases occur,” said Path CEO and president Steve Davis. “We’re excited to continue working with our technology partners to expand the support and tools governments need to get the upper hand in controlling and eventually eliminating a disease that still kills more than 400,000 people every year.”

Mapbox says that in addition to remote and on-site technical support and training, it will supply online and offline mapping tools and geospatial data that can be combined with other data sets to create interactive maps. Exasol, for its part, will provide an in-memory analytics database optimized for low-resource, lower-bandwidth settings, while Alteryx will host a data science and analytics engine that can analyze tens of millions of records in 0.6 seconds and produce multiple outputs to address different analytical questions. 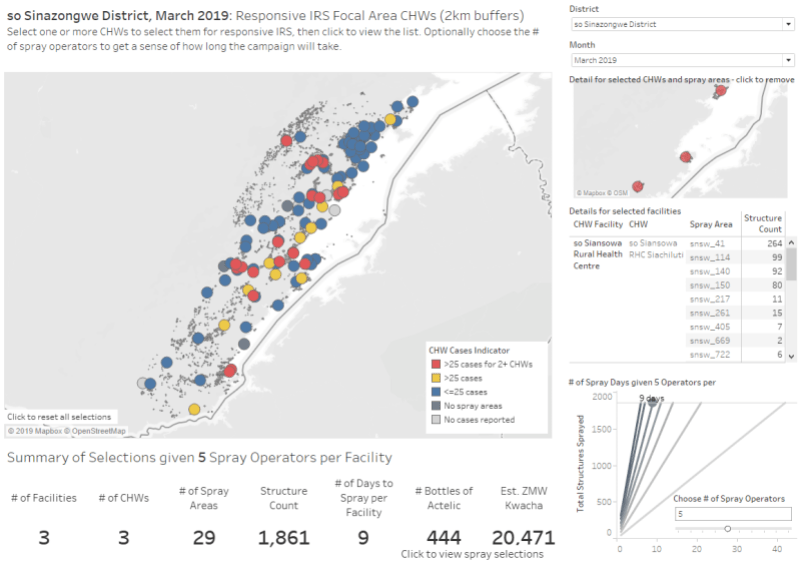 The commitments build on Visualize No Malaria, a program launched in 2015 as a collaboration among Path, Tableau Foundation, and the Zambian Ministry of Health. Path reports that, through a combination of improved use of data with other malaria control efforts, the number of reported malaria cases has dropped by 85% and deaths by 92% across a population of 1.8 million people in the country’s Southern Province. Visualize No Malaria tools have also been deployed in a northern province of Senegal, which saw a 60% drop in reported malaria cases in two years.

Path says it’ll raise an additional $2.5 million in funding through country and agency partners to scale its programs nationally across Zambia, and says it plans to expand tools and training across West Africa in the coming months.

“Senegal … sees new tools to make data faster and easier to use and act upon as critical to helping us win the fight against malaria,” said the director of Senegal’s national malaria control program, Dr. Doudou Séne. “With this new commitment, we can increase the number of districts where we use the Visualize No Malaria stack and make informed, real-time decisions across the nation, as well as support our cross-border collaboration with The Gambia.”