Indie studio Hopoo Games isn’t wasting any time on Risk of Rain 2. Over the next year, the developer plans on adding a ton of new content to its cooperative multiplayer game (now available on PC via Steam Early Access).

Today, Hopoo and publisher Gearbox Publishing unveiled the content roadmap for Risk of Rain 2, which helps players understand what’s coming between now and the game’s launch window of spring 2020. Starting in June, the developers will release five updates, each of which will bring major additions like new characters and bosses.

Risk of Rain 2 randomizes level layouts, enemies, and loot every time you play, so adding more content like this is vital to making the game feel fresh. Hopoo also wants to keep some things secret until launch, so the final stage and boss monster won’t be available until next year.

The first Risk of Rain, a 2D sidescrolling roguelike, was a surprise hit in 2013, selling over 3 million copies. Risk of Rain 2 takes the series into 3D for the first time. 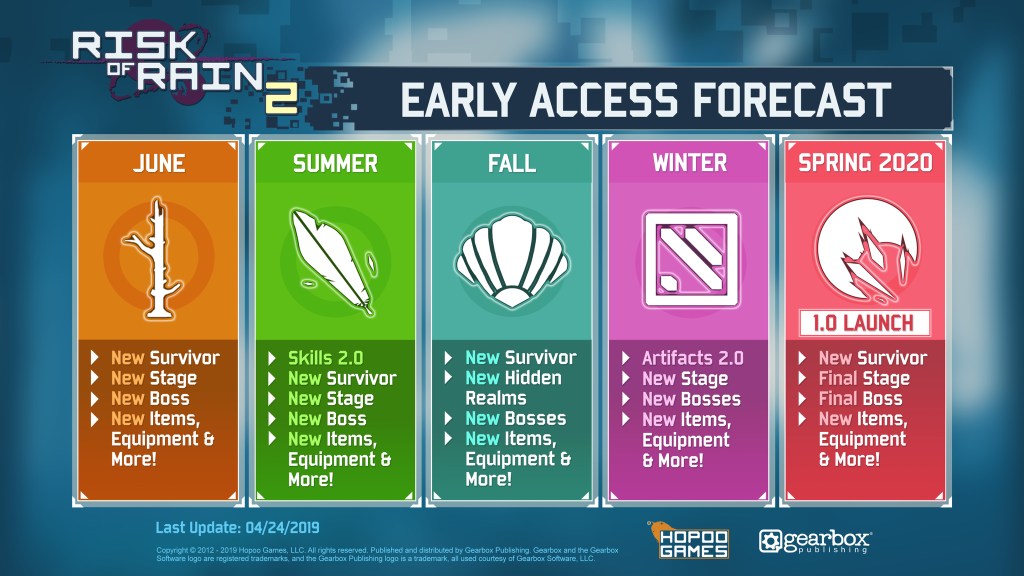 Above: The roadmap for Risk of Rain 2.

And so far, it seems like players are digging it: The game has an “Overwhelmingly Positive” rating on its Steam store page based on 13,000 user reviews. In its first week on Early Access, the game sold 650,000 copies.

“We are sharing this forecast so players know what to look forward to and what the team is working towards in making Risk of Rain 2 the best game of its kind,” said Hopoo cofounder Paul Morse in a statement. “That’s only possible with the input and feedback we get from our players.”