I’m very proud of our GamesBeat Summit 2019, the event we held about Building Gaming Communities at the community-oriented Two Bit Circus in Los Angeles. It was all about fun, with a major subtheme of reinvention.

We had nearly 500 people this time, and that made it hard to talk with everybody I wanted to catch up with. I’ve formed relationships with many of the people who spoke at the event over the decades, and it’s always fun to see how they are reinventing themselves and gaming. But so many people attended, I could not chat with them all individually at this event. 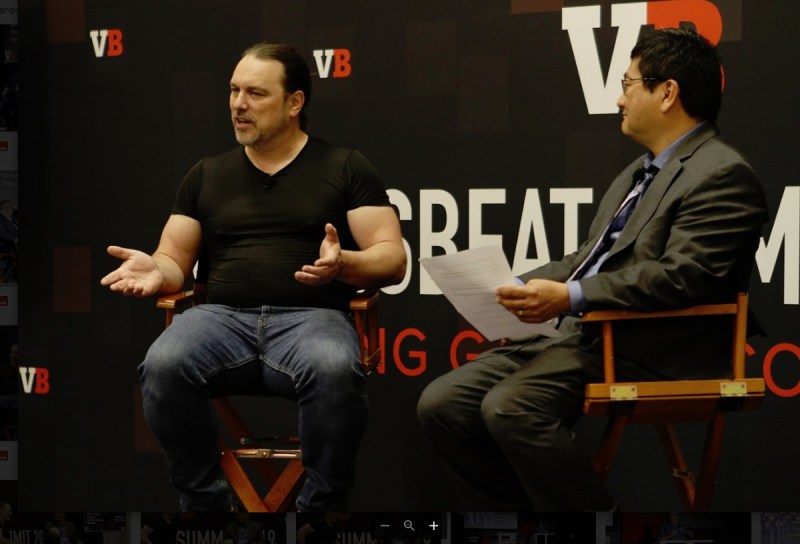 Above: Chris Taylor and Dean Takahashi at GamesBeat Summit 2019.

We had 97 speakers across 52 sessions on two concurrent stages producing more than 24 hours of content. Fortunately, we’re going to put most of the onstage talks on our VentureBeat YouTube channel for on-demand viewing. What I enjoyed were the moments of silly banter with old friends and raising questions that didn’t have answers.

In this column, I will talk about just three of the speakers here — the talks that I personally moderated. Those included fireside chats with Chris Taylor, founder of Kanoogie; Michael Condrey, founder of 2K Silicon Valley; and Brock Pierce, chairman of the Bitcoin Foundation and blockchain entrepreneur.

All three have reinvented themselves. 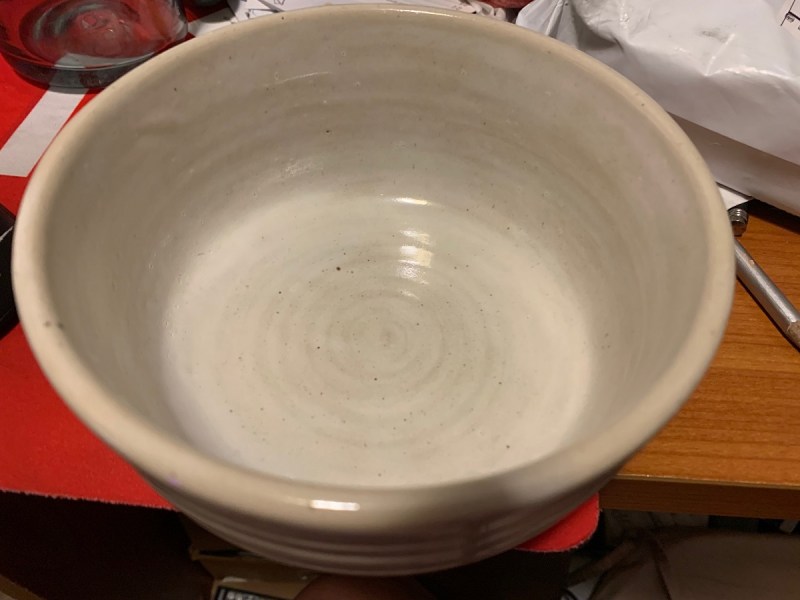 Above: Chris Taylor of Kanoogi gave Dean Takaahshi this bowl.

Chris Taylor went from running large teams at Gas Powered Games and Wargaming to a solo shop, guided by his own inspiration and a single artist. He stepped off the hamster wheel of making bigger and bigger games, each one more intense and graphically beautiful. Now he’s back with a company called Kanoogi.

“I said I wanted to do something with deep gameplay,” he said in our fireside chat. “I want to write all the code myself. I want to go in deep, as an indie developer.”

He is making a platform for super-fast web games and a title called Intergalactic Space Empire. He broke the rules, making a browser-only game that, when it comes out, should run on just about any computer in the world. With 30 years of game development behind him, Taylor is starting over from scratch. I’ve seen the arc of his life, with its peaks and valleys.

A decade ago, Taylor was the emcee at our very first GamesBeat Summit. Seven years ago, he took up the hobby of making pottery. He gave me one of the bowls. It means I’m part of Taylor’s inner circle, and it’s exciting to see him get excited about doing something new and totally different. Now he thinks that Kanoogi can enable billions of people to play games in a web browser, with no need to download.

“There’s nothing worse than doing the same thing every day of your life,” Taylor said. “You gotta do something different. It’s not all about the money. I’m tired of money. It’s about art, and life experiences, and friends.” 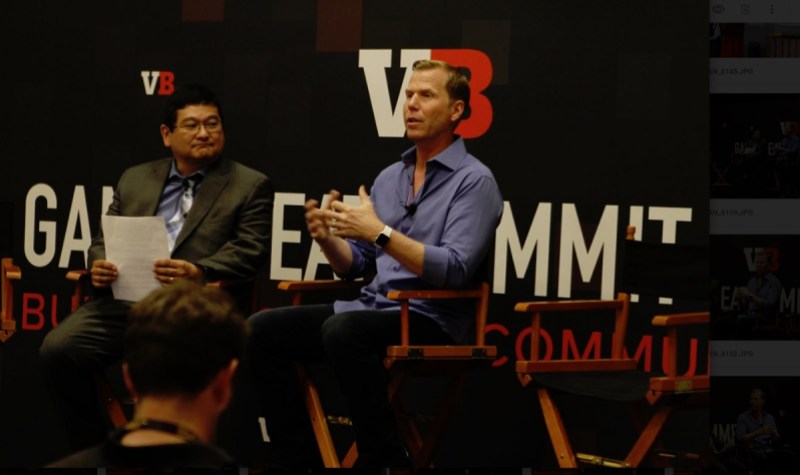 Above: Dean Takahashi and Michael Condrey speak at GamesBeat Summit 2019.

Michael Condrey has also gone through the time warp, morphing from developers of games like Need for Speed and Dead Space at Electronic Arts, to cofounder of Sledgehammer Games and creator of titles like Call of Duty: Advanced Warfare and Call of Duty: WWII. He walked away from that 300-person studio last year and recently announced the formation of a new studio, 2K Silicon Valley.

Condrey has already assembled a team of 30 developers, and he has approached it with a new eye toward diversity from his very first hire. I asked him about that, and he reminded me that he has a daughter, and that he would like her to grow up and have the opportunity to work in the game industry someday. For that to happen, the industry has to change to be more hospitable toward women.

I asked Condrey about the idea of “responsible game development,” and he had an interesting answer. He said that he has often thought about the kind of content he has made in the past, like games such as Call of Duty: Modern Warfare 3, where just a certain kind of enemy was depicted as evil. And he thought about the mass shooting at Christchurch, New Zealand.

In this global gaming business, in these times that we live in, is it a responsible thing to create such violent games? Condrey didn’t have an answer to that, nor do I. I used to be hyper-sensitive to violent games at one point in my life. I didn’t play them. But slowly, I picked them up again. And when I picked them up, I didn’t play games like Grand Theft Auto because you didn’t get to play the “good guy.” You were a criminal. I have moved beyond that point in my life, and I am able to separate fiction from reality, and I will play characters who are both bad or good now. But they still make me ask myself questions. Like whether we can solve issues like game addiction.

And Condrey is asking himself those questions anew as he starts a new studio. And he’s acknowledging he doesn’t have all the answers.

Embracing change and changing times, is sometimes what you have to do, he said. 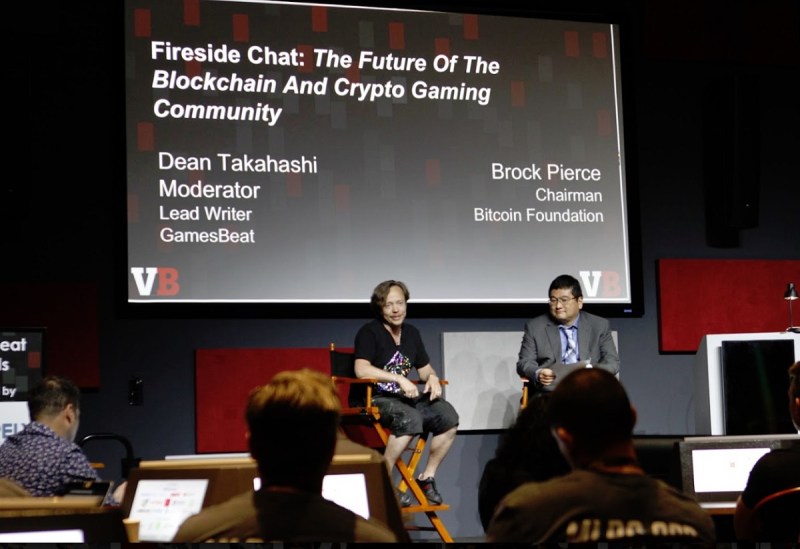 Above: Brock Pierce and Dean Takahashi at GamesBeat Summit 2019.

Brock Pierce came onstage as our last speaker on the Boss Stage, closing the conference. And he was like the boss of bosses. Pierce, the chairman of the Bitcoin Foundation, has been described by Forbes as a “Bitcoin billionaire.” We don’t know what his net worth is, but he has been at the right place at the right time.

I met him during the heyday of social casino games, when he was starting a company called Playsino back in 2012. I stuck with games and he veered off into Bitcoin.

Just as he was early with internet video, virtual goods, and other waves of technology, Pierce was way ahead of the game in seeing the potential of blockchain — a transparent and secure decentralized ledger — and cryptocurrency, a digital currency which uses encryption and blockchain to securely regulate the currency and verify the transfer of funds.

In 2013, he cofounded Blockchain Capital, which raised money to invest in a large number of blockchain startups. He was forming new companies every 45 days. In 2017, he was a shareholder and adviser for Block.one, which held an initial coin offering (ICO) and sold $700 million worth of its EOS coins. EOS tokens are now valued at around $4.9 billion. He was also an investor in Tether, which like EOS is also one of the largest digital currencies in the $350 billion cryptocurrency market. He left Block.one in March 2018.

Now Pierce is coming back full circle on games. At first, he felt like cryptocurrency needed a foundation, with faster, secure, and programmable blockchain platforms like EOS and Tron. And now that the foundation is there, Pierce believes that blockchain-based games have real potential. This is one of those seams between games and technology that could lead to something big, or blow up in disastrous ways. He thinks we are like at the beginning of internet 2.0.

People get caught up in scams and gold rushes. But the collapse of the price of cryptocurrencies has caused a cleansing of these people, he said.

Pierce wants people to learn, empower themselves, and decide how to apply new technologies like games over the long term, and not worry about the “fear of missing out,” or FOMO. He now sees companies coming out of the blockchain prototyping stage, with technologies that are ready to scale. 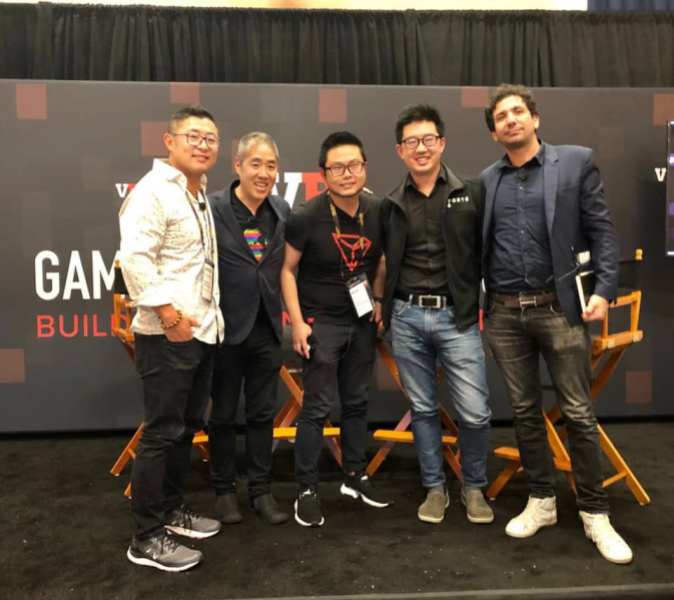 “We have blockchains you can build games on,” he said. “Imagine if you had access to the iPhone before its release. You start thinking about can you build games for this iPhone. This is the time. I think we are at that moment.”

Entrepreneurs like Kevin Chou, cofounder of Kabam, are now investing in blockchain, and Pierce thinks that’s a tea leaf. At an earlier panel, Chou said he was excited about the opportunity to use blockchain to change game economies.

“It’s a big deal,” he said. “When you start to see people who can do anything in the gaming space do this, pay attention.”

Pierce is mulling whether to invest in game companies himself once again to kickstart the blockchain gaming space.

“Under the right circumstances, I could see myself doing something in this space,” Pierce said. He doesn’t have to do this just to become a bigger billionaire. But Pierce said he believes a “billionaire” is someone who positively impacts the lives of a billion people.

Thank you for coming

I enjoyed these talks. I hope our audience did too. I heard from a lot of people that it was our best GamesBeat ever, and I humbly accept that gracious praise. We reinvented our show at the micro-amusement park Two Bit Circus, just as these entrepreneurs reinvented themselves to get ready for new waves of gaming.

If you came, thank you for being present. Or if you viewed in on the stream, I’m glad we could entertain you. And if you missed a lot of sessions like I did, check it out on our YouTube channel over the coming weeks. It takes a village to make a gaming community like the GamesBeat Summit. Thank you to those who helped put it on. I’m glad those videos will live on because it makes me feel like we built something of lasting value.