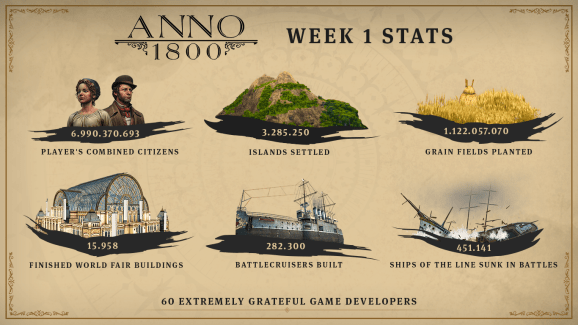 Ubisoft announced today that Anno 1880 has become the fastest-selling entry in the series.

The PC strategy/city-building game released on April 16. It sold four times as much in its first week as its predecessor, Anno 2205, which released back in 2015.

The Anno franchise started in 1998 with Anno 1602: Creation of a New World. Anno 1880 is the seventh entry in the series. The four-year wait between Anno 2205 and this game may have helped build up anticipation, which resulted in the higher sales.

“Anno 1800 has been an incredible journey for all the excellent people working at [developer] Ubisoft Blue Byte and we are so happy to see that players really enjoy playing our game,” said Ubisoft Blue Byte managing director Benedikt Grindel in a press release sent to GamesBeat. “Since the announcement of the game, the community of Anno 1800 has provided us with countless useful feedback through our community platform Anno Union and helped us release an excellent game.”