The Oculus Quest addresses everything that’s wrong with PC and mobile virtual reality these days: It cuts the cords and puts the sensors on the device, giving you freedom of movement that Oculus Rift and HTC Vive can’t offer. And it gives you the horsepower to play some of VR’s best games, something that the mobile VR of the Oculus Go or Samsung Gear can’t do. It comes out May 21 for $400.

So, is it an in-between compromise between freedom or power, or is it a liberating device that opens a new realm of possibilities for developers of VR apps and games?

With Quest, Oculus and Facebook have a chance to take a step further into the immersion that VR hints at. It’s not there yet — little things like fit, itch, and feel prevent true immersion from happening. But you see the potential, and it’s better with Quest that it is with any other headset on the market. Standalone VR means developers no longer have to worry about wonky seated sensors and cables, and now you can move about without fear of gear no longer tracking you. It’s easy to use and set up. I look forward to seeing what this means for games where you’re brawling, fighting, or building. Imagine Minecraft in VR, where you’re placing blocks to build structures with your own hands — Quest could make it happen. It could be transformational.

But jeez, it needs better games, and fast. And the damn thing’s too itchy. 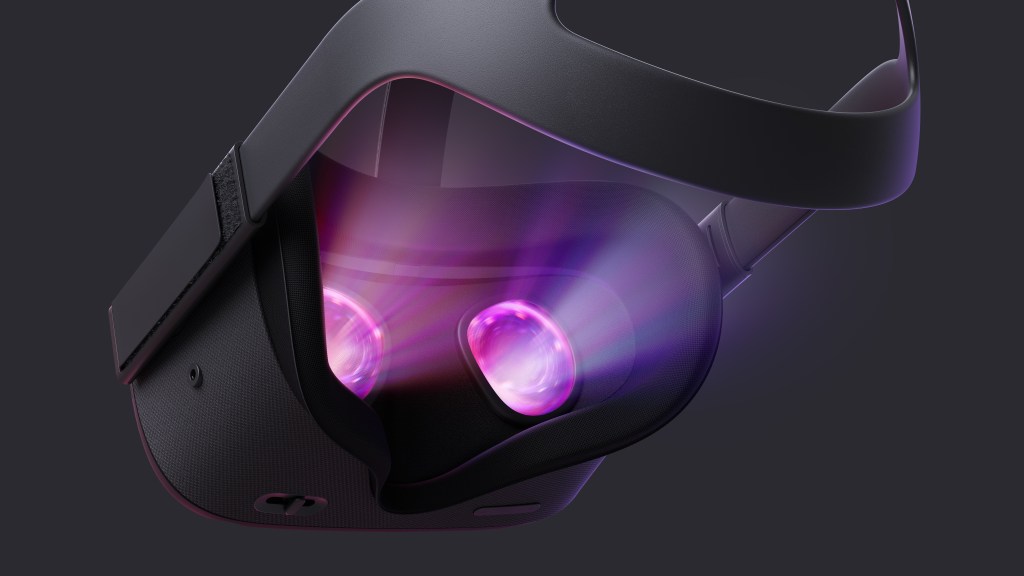 My biggest quibble with VR has been the cables. I get annoyed when I hear or feel the cable bang about when moving my head, and I detest tripping over it when moving around. (Yes, I’m clumsy. What a surprise.) It feels natural to move about without anything tethering you.

I look forward to seeing how developers create games for wireless headsets that take advantage of being able to move around without dealing with a cable. Imagine ducking and diving to avoid things coming at you, or jumping 180 degrees to stick a sick move in a dance game. I would break my neck tripping over a cable.

Take Creed, the boxing game that puts you into the squared circle of the Rocky-verse (wait, this series gets a universe now?) Punching, dodging, and moving around felt more natural to me, though the pugilists I’m whaling away at still move a little herky-jerky when it comes to blocking (but that’s a game issue, not a hardware problem).

I might have enjoyed setting up the Guardian more than any of the games. It’s cool.

When you use the Quest in a room for the first time, it’ll have you set up parameters for a safe area. This is so it knows what area you’re using and to keep you from hitting a chair, a table, or other obstacles. You draw out the area with the Touch controllers, and the background’s little white plus marks remind me of the USS Enterprise‘s Holodeck appearance when not in use. It even has a pass-through view that shows you the room. It’s in a fuzzy black-and-white, like your vertical hold is a bit out of alignment on an old tube TV, and I found this kinda appealing as well.

The Quest can store five locations. I made three, and I enjoyed it each time. It’s not tedious, and it’s easy to do.

Easy to set up

The sensors are on the headset, so you don’t have to worry about dealing with those when you set the device up. It was an easy process — took me about 20 minutes, and I went at a slower pace than I would if I were setting up a device that wasn’t for a review.

Better immersion than ever before 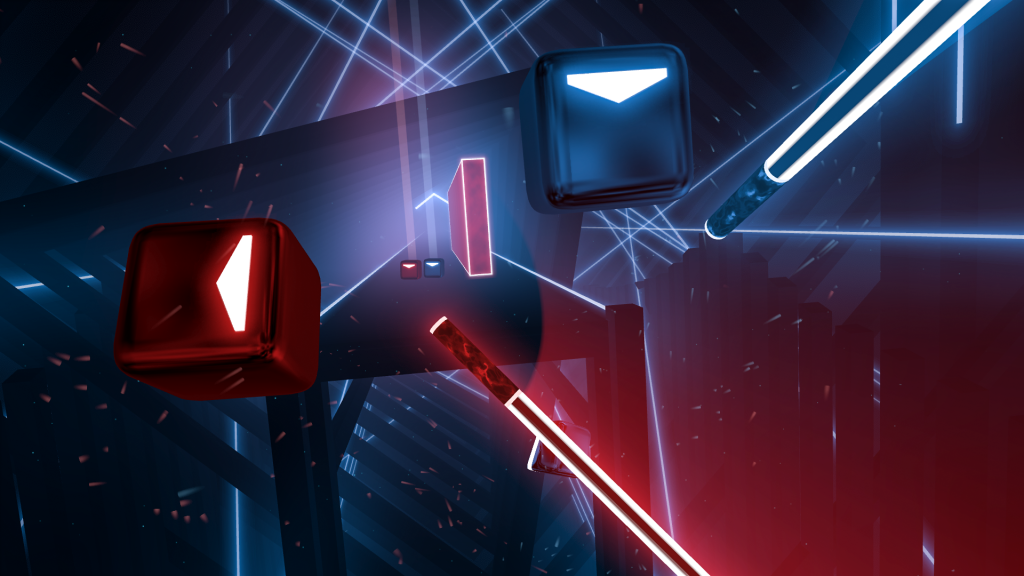 Above: Yes, I did play Beat Saber while singing, “Luke, Be a Jedi Tonight …”

I’m not a boxer. Even at my fittest, I’d be lucky to last more than 10 seconds with even a tomato can like Glass Joe from Punch-Out. But in the boxing game Creed, I knocked out Adonis Creed while playing as his father, Apollo, in less than 2 rounds. And boy, did I work up a sweat!

But what’s key here is the freedom of movement. I ducked of the punches, even if it didn’t accomplish much. I bobbed-and-weaved in my “best” approximation of a professional boxer. I put up my hands to block, and I threw real haymakers, jabs, and uppercuts, moving as I did. If I had done this in seated VR, I’m pretty sure the cameras would have failed to track me. But with Quest, the sensors are on the headset, so I didn’t worry that much leaving the playing area — and it didn’t take long for me to even think about it.

The same applies to Beat Saber, the lightsaber-like rhythm game. I danced and smashed, slashed and dashed, without any concerns about tripping over cables or losing the tracking from the sensors.

Developers are going to think of new ways to capture this freedom of movement in other games, and I’m looking forward to it. I’d love to see a Major League Baseball-licensed baseball game in which I’m trying to catch the heat of New York Yankees closer Aroldis Chapman, aka “The Cuban Flame Thrower.”

My head is big. I have to stretch hats out a bit to get them to fit right. And no matter how many times I tinkered with the straps, the Quest never felt right on my head. It distracted me a few times.

The treatment chemical Oculus put on the straps and the foam that cushions the Quest on your head makes me itch. Its odor is vaguely “New Car Smell,” but New Car Smell never makes me itch. This does. It’s annoying. You may never have this problem. But I do, and it sucks when your head itches when you’re playing a game. Above: Sports Scramble is not a system-seller.

Oculus Quest is going to have 50 games and apps for its launch window. But so far, the only two games that are good are Beat Saber and Creed. Now, that’s going to change as more games go live. I’m interested in checking out Angry Birds: Isle of Pigs, Apex Construct, and Bait — these are all good VR games. But Space Pirate Trainer and Sports Slam aren’t going to sell Quest systems.

I’m eager to give more games a spin as they go live on the store. But Oculus needed to put together a better review lineup. This was an avoidable own goal.

Shelling out $400 for a system with just VR apps and games feels bad. It’s expensive, and right now, there’s no killer app to help move it. That might change once Vader Immortal hits the Quest. But when I look at the Nintendo Switch, I see a portable console with games that are so much better than what Quest offers — for $100 less. And we know the next generation of the PlayStation and Xbox consoles are on their way. Consumers may be saving their dollars for those beasts.

Price this sucker at $250, and it’ll move. At $400, I don’t see must to justify it right now. But once developers “get” the possibilities of standalone VR, that may change. But by then, we’ll be in a new console cycle, and the Quest could get lost — especially if the next generation of PlayStation VR is also without wires and external sensors. 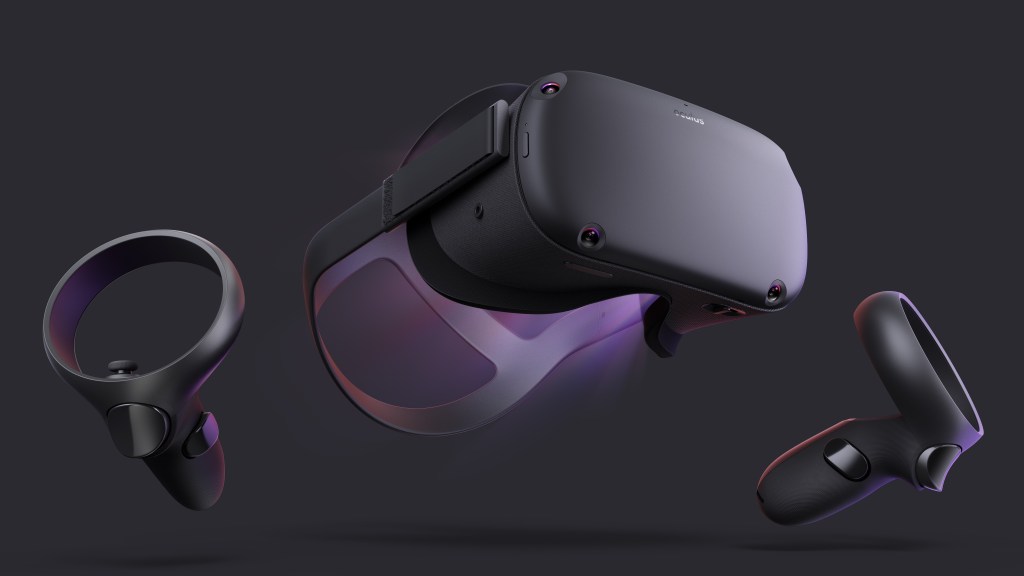 Above: The Quest and the Touch controllers are $400. That’s big prices, even for a transformational headset.

The Oculus Quest is the next step toward true immersion in virtual reality hardware. Ditching the cables and external sensors gives you a sense of freedom you just didn’t get with the Rift. It feels good to use. It’s easy to set up. And it’s fun. It’s battery life is two-to-three hours (games take more power than watching TV or movies).

But the game lineup needs help, and it’s an expensive beast at $400 — and the excellence of games like Beat Saber and Creed don’t justify that price. Yet. I’m looking forward to the next generation of VR games, ones in which developers take advantage of the liberties that come with tetherless VR.

We’re not there yet. And until then, the Quest — as transformational as it could be — risks falling by the wayside because of its hefty price and future console announcements.

Oculus Quest will release on May 21. Oculus VR sent GameBeat a review headset with access to more than a dozen games for the purposes of this review.