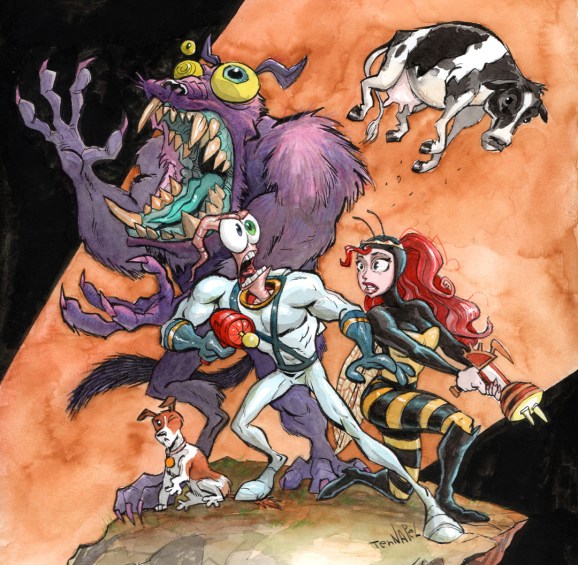 Earthworm Jim is back.

Intellivision is coming back, and it will have a big game for retro fans. The original Earthworm Jim team is reuniting to work on a new installment for the franchise, and it will be an exclusive for the upcoming Intellivision Amico.

The original Earthworm Jim came out in 1994 for Sega Genesis and Super Nintendo, 25 years ago. It stood out for its vibrant, over-the-top style that parodied the mascot sidescrollers of the day. This new game will bring back 10 of the original artists, programmers, and designers. This includes Tommy Tallarico, the composer for Earthworm Jim who is now the president of Intellivision Entertainment.

“We have all been talking about this moment for many years, it’s a dream come true for all of us to finally get the entire team back together, and we can’t believe it’s been 25 years since those original magic moments occurred,” Tallarico noted in a press release sent to GamesBeat. “We’re all looking forward to sharing a small part of our reunion and initial design meeting with fans from around the world.”

The original Intellivision came out in 1980 as a console competitor during the Atari days. The new console is planning to be a device designed for families. It is hoping to launch in 2020 and plans to cost from $150 to $180, significantly lower than modern home consoles.

Crawling back from the dead

The Earthworm Jim team also worked on its sequel, 1995’s Earthworm Jim 2. The series fell into disarray after that. The series had an underwhelming transition into 3D with Earthworm Jim 3D in 1999, and then the last game released in the franchise was the also poorly-received Earthworm Jim: Menace 2 the Galaxy for Game Boy Color later in 1999.

Publisher Interplay still holds the rights to the series, and it is licensing the property to the reunited team. The group will hold a 20 minute live streaming event on May 4 at 12 p.m. Pacific to hear thoughts from fans of Earthworm Jim.