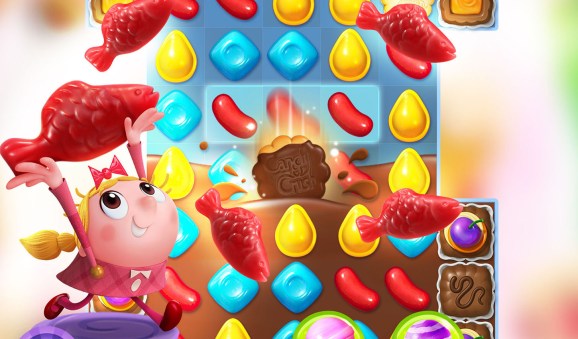 Activision Blizzard beat expectations for first quarter fiscal 2019 earnings today, and it looks like investors have the sweet work of King Entertainment and the long-lived Candy Crush series to thank for part of it.

The video game publisher today announced that Candy Crush active users were up 2% to 272 million for the second quarter in a row, with Candy Crush Friends Saga bringing in new people and lapsed players from older games. It’s the first time King’s seen such growth since 2015, it said during the earnings call. It also said that players were spending more time in the franchise’s games than ever before, with a company record of 38 minutes per day (that’s an average, folks).

Randy Nelson of mobile market research firm Sensor Tower estimates that mobile revenue reached $392 million worldwide on the Apple App Store and Google Play. “This was growth of 2% compared to the year-ago quarter’s total of approximately $383 million.The growth was entirely driven by the original Candy Crush Saga and the most recent installment, Candy Crush Friends Saga, which had its first full quarter of global release in Q1,” he said.

For the 22nd quarter in a row, King said that Candy Crush had two of the 10 highest-grossing games in U.S. app stores. That’s pretty impressive for a series that launched 7 years ago.

“Despite its age, Candy Crush Saga is carrying the franchise at this point, as spending in its first two sequels continues its decline. Friends Saga had a strong first full quarter and prevented an overall decline in spending for the series. However, based on our data, its first quarter of global availability ranks third in terms of player spending on Candy Crush’s spinoffs, having earned about 26% less than Jelly Saga did in Q1 2016,” Nelson said.

It now has four games:

Activision Blizzard CEO Bobby Kotick said during the earnings call more than 500 billion people have played Candy Crush since it launched, and the company added that it was upping investment per its “renewed focus” on its established brands in its February earnings report, in which it announced layoffs of nearly 800 people (hitting Blizzard Entertainment especially hard).