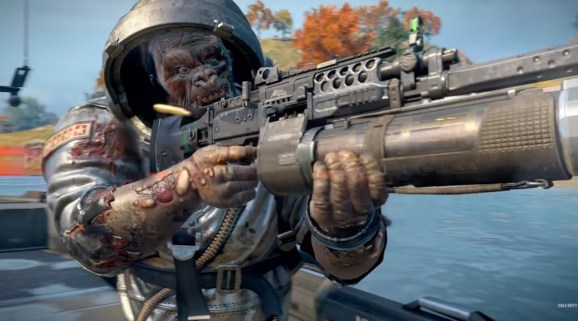 Cosmic Silverback is a new character in Call of Duty: Black Ops 4.

Call of Duty: Black Ops 4 is doing a better job of keeping players than its predecessor, WWII, according to Activision Blizzard’s Q1 financial report.

Black Ops 4 launched on October 12, 2018 for PlayStation 4, Xbox One, and PC, about one year after Cal of Duty: WWII. Both games did similar numbers at launch, but Black Ops 4 is growing total hours played and daily time spent per player at double digits compared to WWII’s pace at the same after its release.

Activision Blizzard releases a new Call of Duty annually, and that title is always one of the most successful games of its year. Black Ops 4 momentum is a positive for the future health of the series.

While Call of Duty games don’t usually change much year to year, Black Ops 4 was notable for ditching a single-player campaign in favor of a battle royale mode and emphasis on the cooperative zombies experience. That change in direct seems to have paid off, as the focus on multiplayer could be a factor in making Black Ops 4 more popular than WWII.