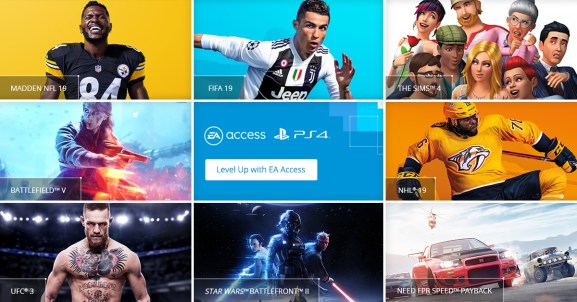 EA Access is coming to the PlayStation 4 in July.

Electronic Arts said today it’s adding PlayStation 4 support for its EA Access subscription program. It’ll cost $5 a month (or $30 a year) and will start in July. This comes almost five years after EA Access hit Xbox One in August 2014. It’s proven popular on Xbox Live and PC (as Origin Access), and with the entries of Apple and Google into the game market (with Apple Arcade and Stadia), subscription programs look ready to grow.

Many companies are in search of a “Netflix of gaming” service, though Microsoft already has had huge success with Xbox Game Pass, its Netflix-like game subscription service. Microsoft found that Game Pass members play more games than they did before their subscription — and more outside their Game Pass library as well. In 2018, Sea of Thieves surged to 2 million players in its first few weeks and State of Decay 2 had 1 million after a single week — and Game Pass played a significant role in these launches.

Sony’s box makes sense for EA — in fact, it’s surprising that the publisher hasn’t had Access on it earlier. Sony is closing in on 100 million PS4 systems sold. That’s a lot of people who might be interested in subscribing to EA’s game service.

EA Access isn’t a Netflix of gaming — just EA. But with a subscription, you get:

“Delivering subscription services to players wherever they want to play is a key piece of our vision. [EA Access] on PS4 will give our players more choice to better their experience with EA games this July,” said Mike Blank, the senior vice president and GM Origin/EA Access, over email.