2017’s Tom Clancy’s Ghost Recon: Wildlands sent players to Bolivia, where they were tasked with dismantling and destroying a drug cartel on its own turf. The next game in Ubisoft’s tactical shooter series is taking a decidedly different approach with its setting and story, leaning more heavily into the fantastical side of the Clancy-verse.

Ghost Recon: Breakpoint forgoes a real-world locale for the fictional island of Auroa, a mysterious archipelago in the Pacific Ocean. Unrestricted by the geographic rules of a place that actually exists, the gorgeous location features everything from snow-capped peaks and sandy beaches to lush jungles and even an active volcano. Aurora is also home to Skell Technology, a Silicon Valley-like corporation focused on building autonomous drones to do good deeds, like heal the sick and end hunger. It’s coming to PC, PlayStation 4, and Xbox One on October 4.

The Ghost Recon series may not have as high a profile as Rainbow Six: Siege, which the publisher said had over 35 million players in June. But Ghost Recon: Wildlands remains a key part of its online lineup, as it gives players a different set of environmental and tactical challenges than in Rainbow Six.

Of course, in the wrong hands, Skell’s ambitious tech could also be weaponized for the absolute worst reasons. Enter Cole D. Walker, a new character recently introduced in Wildlands’ Operation Oracle DLC. Played by actor Jon Bernthal, the fellow Ghost fights by your side in the new story-driven expansion. In Breakpoint, however, he’s the antagonist, an evil-doer who’s recruited other rogue Ghosts to join his misguided, drone-reprogramming cause. 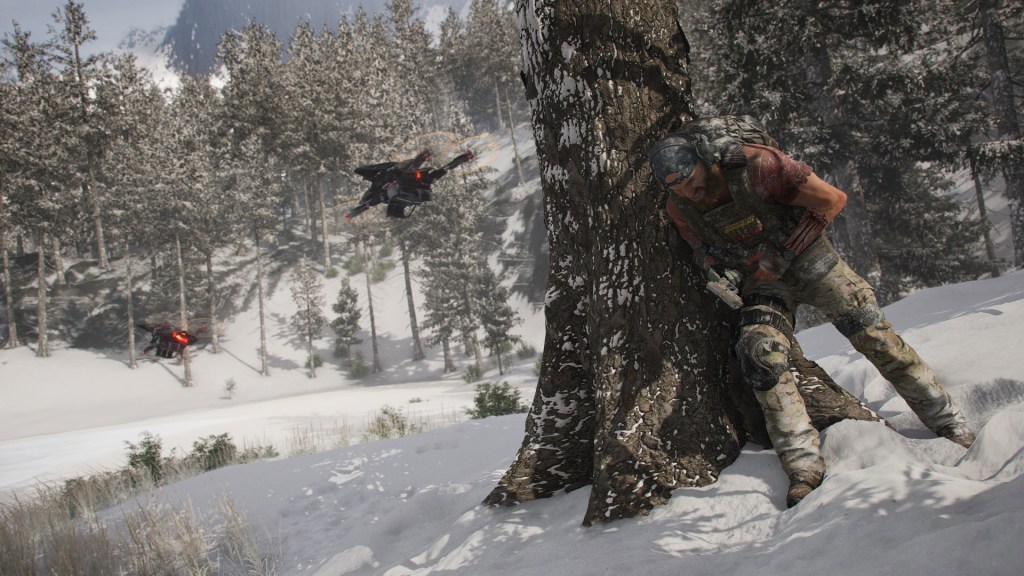 While tracking the crazed leader of a robot army on a volcanic island might sound like the stuff of science fiction, Breakpoint’s tempering its disbelief-suspending story and setting with the series’ most realistic gameplay to date. During the hands-off portion of my demo, writer and military adviser Emil Daubon (a former U.S. Army Green Beret who served in spec ops for 14 years) described the flow of the game as “closer than ever before to the experience of real spec ops missions.”

This extra layer of realism comes courtesy of a deeper focus on survival. Breakpoint begins with a frightening flock of Walker’s killer drones tearing your helicopter apart. This leaves you wounded, stranded, unarmed, and under attack. Without a plan or any preparation, you must survive, taking a pistol from an ally who died in the crash.

According to Daubon, this sets the stage for players having to deal with much more than Walker and his mechanical menaces. “Players will engage with stress, weather, fatigue, injuries, hunger, dehydration, ambiguity, lack of intel, and a lack of supplies.” My demo didn’t dig too deep into how exactly all these elements affect your performance, but it did offer a few hints; one of the Ghosts was limping after taking a bullet to the leg, while hunger and dehydration seemed to be tied to characters’ health and stamina. Above: Bivouacs provide a needed respite and chance to gear up.

The island’s varied terrain will also figure into the game’s survival side. Trudge up a mountain too fast and you might find yourself struggling to breath that high altitude air, but carelessly run down that same slope and you could suffer an injury-inducing fall. Despite the harsh elements, Breakpoint isn’t a hardcore survival simulation. The massive map has Bivouacs, camps where players can regroup and recharge. During my demo, the Ghost with the leg wound used his time at this temporary respite to pluck a slug from his limb with a pair of pliers.

On top of applying Bactine and bandages, you can use the Bivouacs to assign character buffs, maintain and upgrade weapons, craft valuable resources — which you can share with others — and prepare for missions based on weather forecasts and the ability to choose what time of day they break camp. Unlike Wildlands – and Ubisoft’s other open-world entries – Breakpoint won’t feature an icon-cluttered map prioritizing your objectives. As such, you’ll also use these camps to manage procured resources, as well as use any gathered intel to plan your next move.

A Ghost for every occasion 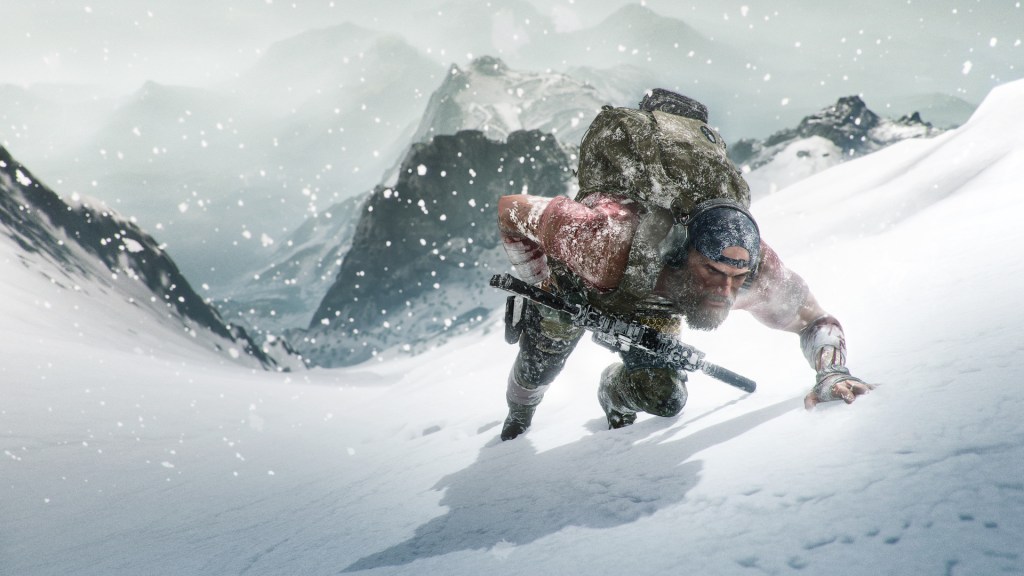 An integral part of this premission plotting includes picking your class, arguably the Bivouac’s most significant feature. Before leaving camp, players can choose to strap their boots back on as an assault, sharpshooter, panther, or engineer Ghost. The selection is specific to the coming mission, and can be changed upon visiting another camp. Each class sports specific buffs, weapons, and gear, essentially allowing players to choose a fresh loadout before tackling a key objective. The stealthy Panther can use smoke bombs, for example, while the engineer has access to a drone-demolishing rocket launcher.

Regardless of which class you favor, any Ghost can leverage the new “prone camo” system to gut unsuspecting goons. Players essentially become one with the environment — whether it be covered in mud, sand, snow, or grass — to hide from passing patrols or deliver the sort of stealth kills that’d make Rambo proud. If you prefer taking targets out from a distance, the series’ sync shot returns; this signature move will be familiar to any four-player co-op crew that’s simultaneously dropped a quartet of threats, but solo Ghosts will be happy to hear the iconic kill can now be performed with a single player accompanied by three AI drones.

My extensive developer-directed demo – as well as my brief time behind the controls – was packed with potential and plenty of precision headshots, but it barely scratched the surface of the many new systems and mechanics introduced. There was also a long list of features mentioned, but not necessarily shown, including dozens of new vehicles, a deeper narrative focus, varied enemy archetypes, progression that carried across all modes, and even endgame raids.

Based on the promising slice I saw, especially those chopper-chewing drones, I look forward to being dropped in the jungle with no supplies, weapons, or resources when Ghost Recon: Breakpoint lands October 4.

Correction, 1:39 p.m. Pacific: The island’s name is Auroa, not Aurora. We have corrected the error.