Days Gone has perhaps the most technical flaws that I’ve seen in a major triple-A video game in recent years. Yet I finished the entire campaign and relished the main story about a broken man surviving in a fallen world.

I admire Sony for having the guts to stand by Bend Studio, which developed this single-player game over seven years. I played it for maybe 50 hours spread out over a few weeks, which is why I’m quite possibly the last critic to review this game. I’ve waited a long time for this game and wanted to be patient with my playthrough.

It has good things and bad. It’s buggy. And that’s a shame because it had so much potential to be the open world version of The Last of Us, as some critics have said. Bend Studio showed us the best part of Days Gone at E3 in 2016 when they showed off the anti-hero, former biker gang member Deacon St. John, taking on and running away from a zombie, or Freaker, horde. 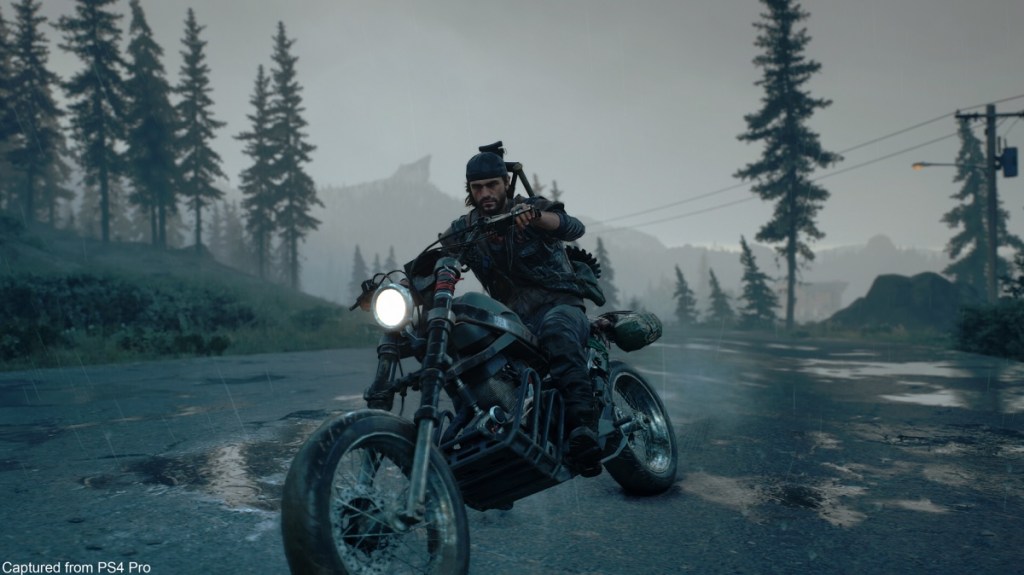 Above: Deacon’s ride in Days Gone.

You can play this scene, where you’re running away from hundreds of Freakers. It is a thrilling, unforgiving battle. If you make a wrong, the horde will catch you or trap you, as the Freakers find ways to come at you from different directions. That’s Days Gone at its best, but sadly we saw it so long ago, and it doesn’t offer anything that’s much better.

This review has some spoilers, but I’ve tried to keep that to a minimum.

A story that keeps you engaged 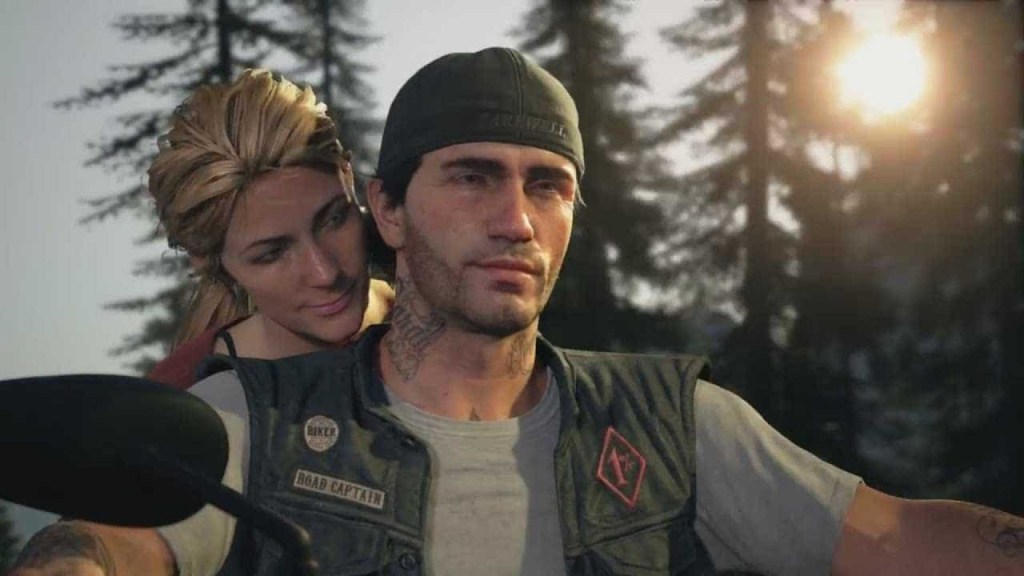 Above: Deacon St. John remembers riding with Sarah before the outbreak.

At the beginning, you see Deacon St. John make a fateful decision. He chooses to stay with his wounded best friend, Boozer, during the middle of the viral outbreak at the onset of the apocalypse. He puts Sarah, his wife who has been stabbed in the abdomen, on an evacuation chopper.

Then she disappears, and Days Gone begins more than 700 days later. Deacon has become a bitter bounty hunter, but he obsesses over his past and constantly searches for any signs of Sarah. He hunts down Freakers or human criminals for the lords who govern the remaining human camps.

As such, he is one of the few who dares to go out into the open world, dubbed the Shit. That pretty much sounds like The Last of Us, The Walking Dead, or World War Z. So many people have written the story of Days Gone off as nothing special. But Deacon is an interesting and flawed character. And despite the technically flawed game, it was good enough to keep me engaged for dozens of hours. 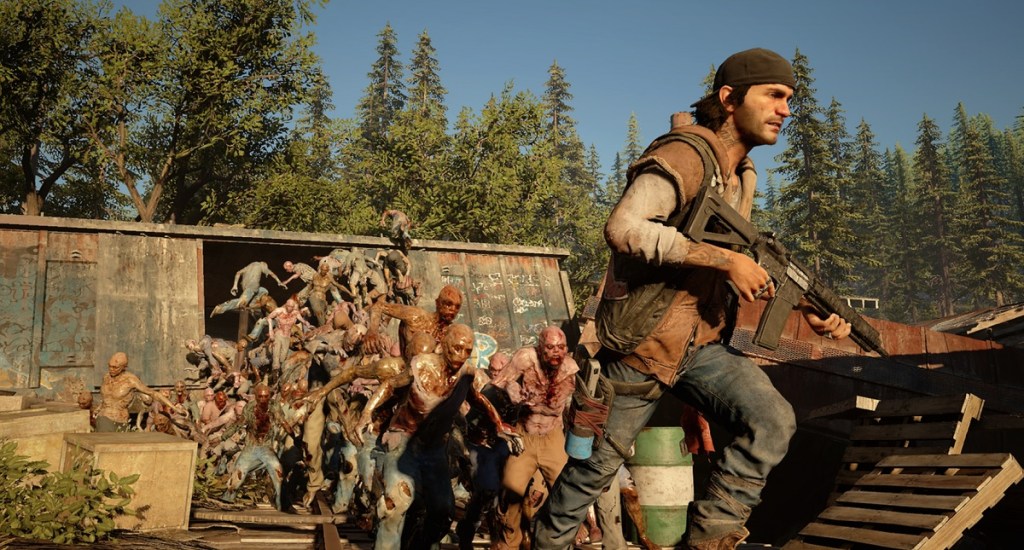 Above: Deacon flees a horde of infected, zombie-like “Freakers” in Days Gone.

I wanted to know what happened, and I was willing to wander the forests and roads for many hours to find out Deacon’s destiny. That adventure took me into horrifying creature battles, motorcycle chases, hopeless horde battles, stealth missions tracking the secretive Nero agency, and just plain-old surviving in the wilderness.

Deacon starts as a bitter man, but his experiences change him, and he embodies the hope of a dying breed.

The story has a lot of side quests, and the interface is quite good at showing your progress through them and the rewards that will come when you complete the missions.

Huge battles with the hordes

Days Gone does a good job of working its way up to the horde battles. At first, you have to deal with smaller numbers of Freakers. But finally, the main campaign missions require you to take out a horde before you can progress.

The horde battles are tricky. You can play them very carefully and engage in a lot of choreographed moves to get the Freakers to run into traps or trigger explosives.

One false move, and you’re done for. This is why the stuttering can be a problem. But it’s also a matter of skill. I had to go back and replay some of the horde battles many times before I was able to survive long enough and turn the tide against the Freakers. Your job is to thin out the horde, picking off stragglers like predators going after a herd.

I spent a long time waiting to play the horde battle at the sawmill, which Sony teased in 2016. It was very difficult to beat, until I found one of the secret places that made the battle much easier to fight (see below).

A dangerous world with many creatures 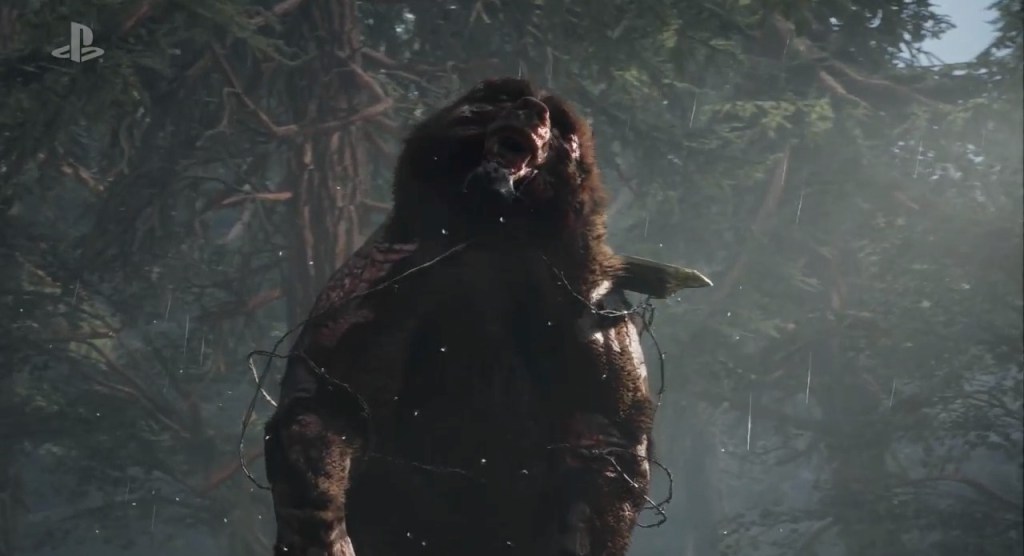 Above: The Freaker bear in Days Gone.

I like the fallen world that the developers created. We only know fragments of what happened to trigger a viral outbreak, and we don’t much care about that. The task at hand is survival.

The infected Freakers are easy to pick off when they are alone. You sneak up behind them give them a knife to the skull. But when they gather in groups, or you take too long to dispatch one of them, a whole horde can come down on top of you. That’s terrifying, and the drumbeat of the music increases the tension. But the world of Days Gone has many more terrors, and everything tries to kill you.

The crows were something I didn’t expect. I was going to burn out some Freaker nests and the crows started diving on my from the sky. They did a little bit of damage at first, but then I realized they were infected. Soon enough, they had me reeling and eventually killed me. You encounter regular wolves and Freaker wolves, known as Runners, that can keep up with your motorcycle.

When you meet one of the new creatures, they seem like insurmountable pains in the ass. I had to get up on a roof to take out a bear with Molotov cocktails. But later on, when I had to take on a Rager (an infected bear) on the ground, that was such a hard battle. I could only beat the bear by continuously running around a cabin or a car, firing as I could, and then tossing incendiaries at it from a distance.

Humankind, of course, is the most dangerous kind of animal that you come across. And they cause a lot more trouble than the Freakers or infected nature in the story. Every now and then, you’ll be riding on a highway and a trip wire will make you crash, or a sniper will knock you off your bike. 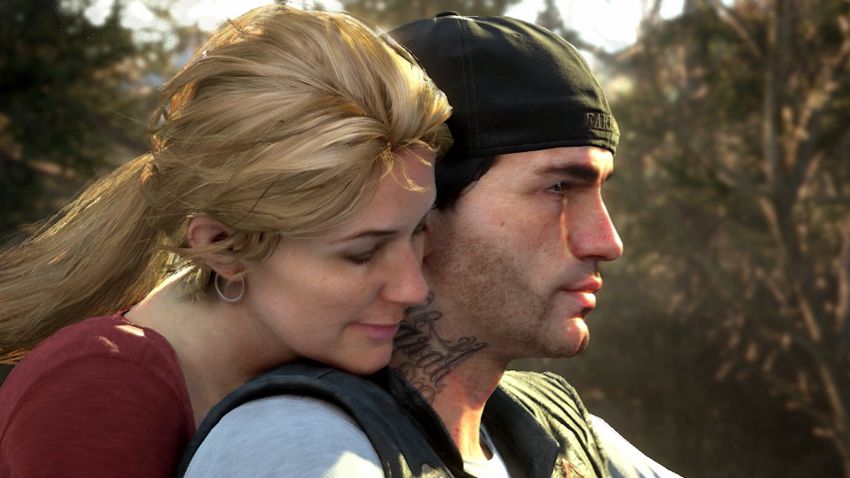 Above: Sarah and Deacon in better days.

Deacon and Sarah are an odd couple. He’s a biker in the Mongrel gang, and she’s a scientist at a research facility. They turn out to be more than what you expect. Deacon is often angry — even to the point of muttering loudly too himself or screaming during stealth missions. But he has his limits when it comes to being a gruff killer. He saves children, won’t attack unarmed women, and shows devotion to his lost love that can be touching at times.

The dialogue between Sarah and Deacon can be pretty stilted, like when she asks him to promise to “ride me more than you ride that bike.” I liked how the story unfolded, as Deacon tries to stiffen himself and become unemotional to deal with loss and separation. It made him more interesting as a character.

Deke’s friend, Boozer, is also a welcome character who brings some levity and banter to the otherwise grim world of Days Gone.

The Oregon landscape is beautiful 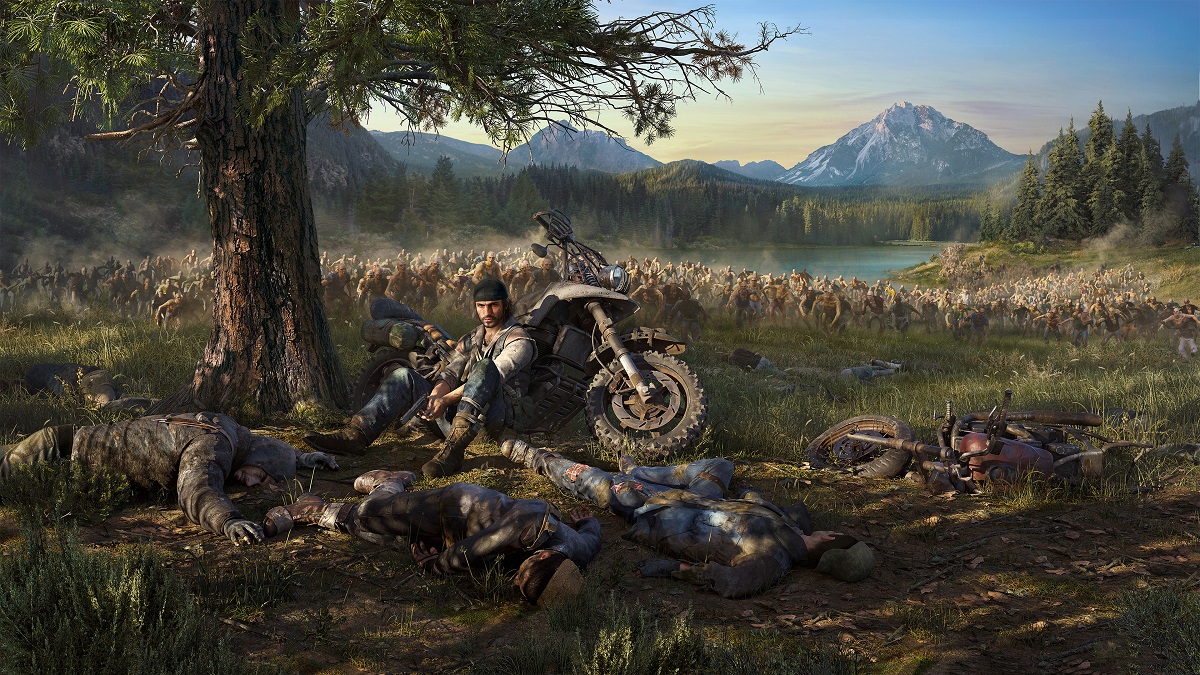 Above: It’s pretty … if you don’t mind the Freakers.

Bend Studio set Days Gone in its backyard, and you can tell. The open world is well crafted, with beautiful trees, grasses, mountains, forests, small towns, and other scenery.

Sometimes, when you go inside the buildings, you don’t find much personality on the inside. But the outdoors is the real star here. You see a beautiful field of wildflowers, juxtaposed with dead bodies and burned out cars, and the occasional human camp. The weather changes from bright summer to snowy winter, and the landscape changes to reflect that. Driving your motorcycle through the mud and the snow is a lot harder than in the summer.

The open world has a couple of parts to it, allowing for some variety. The NERO military camps offer a lot of places to run and jump, resulting in mazes where humanity has a chance to survive.

Weapons that get better with time 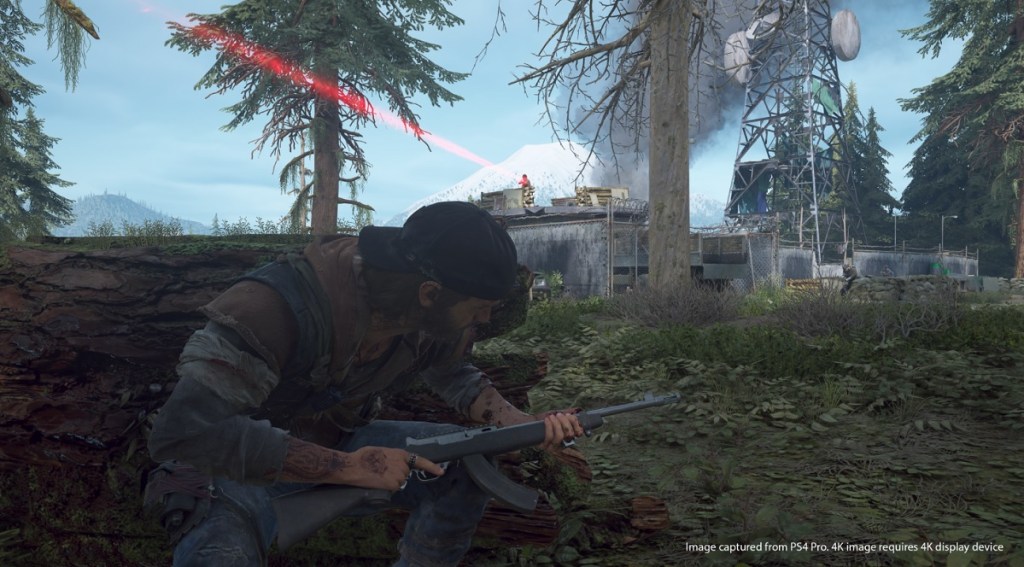 Above: Watch out for snipers in Days Gone, until you get your own powerful sniper rifle.

The pistols and assault rifles are trash. They have very little range, didn’t feel good when you shot them, and were often inferior to using a melee club. Early on, life is tough when you close with the Freakers.

Later in the game, things got easier. Once I got the special weapons like a heavy machine gun or the highly lethal sniper rifle, things got much easier. I could take aim at a big Freaker like a Breaker and bring him down before he knew what was happening.

But sadly, once I picked up a heavy machine gun, the game took it away from me when the mission was over. But I earned another version of that weapon later in the game.

It took a long time to earn traps, which are explosive devices that you can trigger while on the run. Those were absolutely necessary in fighting off hordes. You have to work your way up to the traps.