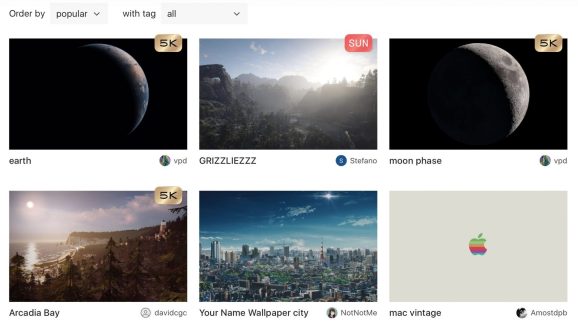 A sampling of the Dynamic Wallpaper Club offerings.

Apple’s mid-2018 announcement of macOS Mojave included two significant UI updates: a system-wide Dark Mode, which quickly inspired envy in other operating systems, and Dynamic Desktops, backgrounds that change from day to night as time passes. Since Apple has only modestly supported the latter feature, three German developers have launched Dynamic Wallpaper Club, a site that lets anyone download and create the unusual images.

Dynamic Wallpaper Club includes three key sections: a gallery, a creation tool, and documentation on how the unusual wallpapers work. The gallery contains dozens of free Dynamic Desktop downloads, ranging from space and urban scenes to nature landscapes — even a “Mojave XP” scene based on the “legendary” Windows XP desktop, and a pixel art landscape, both automatically changing from dawn to dusk according to the time of day. In some cases, the imagery is available in 5K resolution, the highest level of detail currently supported by Mac screens.

Though fewer people will use it, the Club’s inclusion of an actual development tool for Dynamic Desktops is arguably more interesting. Creators can choose between “time mode” and “sun mode,” with the former switching images based on timestamps and the latter using a more sophisticated algorithm. In sun mode, each photo’s GPS/EXIF data is used to reproduce “the exact sun conditions according to when your photo was taken,” modifying the wallpaper based on the “current Sun situation at your location,” including factors such as a lower sun for winter and higher sun in summer.

All of the Dynamic Wallpaper Club’s features are free for users, including gallery downloads and the online creation tool. The developers are accepting donations to defray costs involved in hosting the images and developing the site. Since Apple itself has had a poor history of updating iOS’ similarly “Dynamic” wallpapers, it remains to be seen whether the company will add new Dynamic Desktops to the next release of macOS in June or leave updates largely to third parties.