GamesBeat: When did you think that it actually got fun? During what phase of that development?

Fan: It was right around when I made those last changes. That’s when I thought we were on to something. It was already pretty darn fun. Did I ever tell you the story of why it was plants and why it was zombies, by the way?

Fan: I’d worked with PopCap and we had the same kind of design philosophy. You want to make your games appeal to as wide an audience as possible, so all kinds of people will play your game. I loved playing Warcraft III tower defense mods, but one issue with those was, the map you were building your towers on was multiple screens wide and tall. You had to use the mini-map in the corner to navigate all that. You’d have scrolling controls, moving the mouse to the edge of the screen to scroll.

When you introduce stuff that’s beyond the immediate scope of vision, it always gets complicated, and you have to add UI to navigate that. I wanted to avoid that altogether. Can I make a game, a tower defense game, that just plays on one single screen? That was the goal.

I needed an enemy that people would just look at and immediately realize, “That’s a slow enemy.” I wanted the enemies to come on screen and walk at you really slowly to give you the time strategize against them. If the game had been Plants vs. Cheetahs, it wouldn’t work. The cheetahs would sprint at you and you wouldn’t have time to set up defenses or put down potato mines in advance. I needed something that was obviously a bad guy, but also obviously slow. That’s why it’s zombies.

The reason it’s plants is because I like to inject as much character into my games as I can. Towers themselves weren’t going to do the trick. Towers are typically buildings with no faces on them. Here’s a wood or metal structure that shoots arrows at things. I wanted something that I could put faces on. I’d played a tower defense game where your towers were these little knights with swords and stuff. They would walk toward the enemy, but when the enemy got out of range, they would walk back to their original location. Why don’t you follow the enemy? That doesn’t make sense either. I was looking for something that satisfied all that, but you would take one look at it and know that it doesn’t move.

What’s something that everyone knows doesn’t move? Plants. That’s why it’s Plants vs. Zombies. It’s not just a coincidence. I didn’t just think, “What would be great to pit against each other? Plants and zombies.” A lot of thought went into each of those ideas. 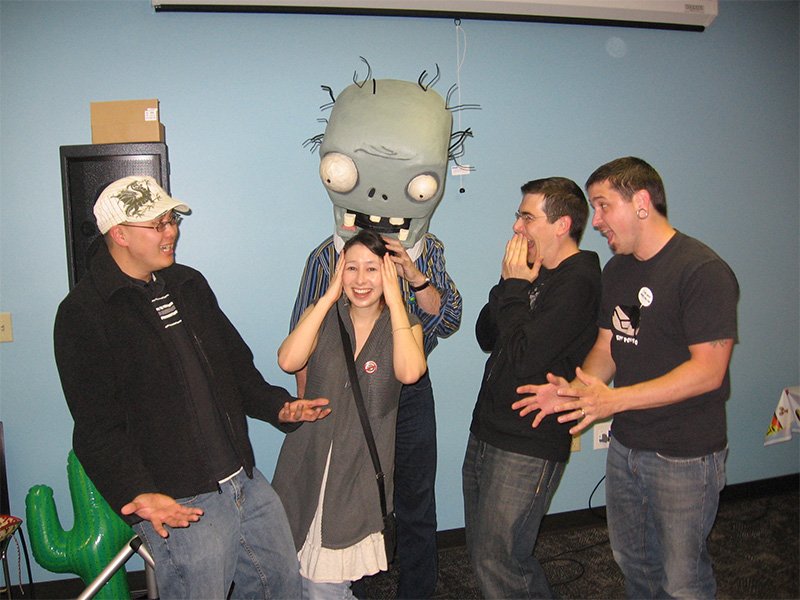 Above: The original Plants vs. Zombies team

GamesBeat: Do you remember how quickly it took off, or how it went viral? Was it really steady out of the gate, or did it take some extra boosting from any particular marketing direction?

Fan: Going back to a couple of months before launch, there was this game Portal that came out. They had this really catchy song that they played over the end credits. We were all in love with that. We said, “Let’s do end credits where the sunflower is singing a song and the zombies are having a huge dance party.” We flew the artist in for a couple of weeks, and the three of us crammed on it. Then Laura Shigihara, the musician, wrote this earworm of a song. It was super catchy. After we had that song, we were thinking up zombie dance moves to it for two weeks, choreographing this whole end sequence.

GamesBeat: I remember this, but I don’t remember what the song was.

Fan: Yeah, that’s it. Now you remember. So we had this all done. We said, “Okay, let’s watch it again,” and we were all so proud of it. We thought it was the most amazing thing. You’re going to feel super rewarded to beat this game now. Then the marketing department at PopCap saw this and said, “This is the best thing. Can we use this for promotion?” On the one hand, it does spoil the end of the game, but on the other hand, sure, why not? If you really think this is going to be great for getting the word out, then let’s go for it.

We set up this whole thing. No one knew that PopCap was making this game. If you think back to around then, this is a game that’s not — it wasn’t something that you would think PopCap would make. It’s more of a strategy game. It’s more mid-core or hardcore than any other PopCap before it. It has zombies in it. Who would have predicted a PopCap game with zombies in it? It wasn’t their typical fare.

We released the video on April 1 of that year and said nothing more than that. The video itself took off, and people were also speculating about whether it was real. PopCap’s making a zombie game? But the power of that song and the video itself, it piqued a lot of people’s curiosity. That, combined with when the game came out — people just fell in love with it right away. People couldn’t stop playing it. That built on PopCap’s existing fanbase. PopCap was already starting — they had their casual fanbase, but Peggle had also come out and gotten more people in the mainstream game industry to take notice. All those factors combined.

GamesBeat: I thought what was so rare about it was that it had this sense of humor. So few games actually pull off humor so well. Little things like the heads falling off. In hindsight I’m sure humor isn’t easy to pull off.

Fan: [laughs] I always wished for more humor in games in general. Making it, the game just naturally lent itself to that kind of thing. As we realized the silliness of the setup we were using — you can’t play it serious. In what other situation are plants going to shoot pea projectiles at zombies? That’s just ludicrous. You can’t play that straight. You have to go absurd. That lent itself to a lot of random bits of humor here and there. I’m glad you appreciated that. For sure it’s one of the unique elements of Plants vs. Zombies.

GamesBeat: It got so popular that it started becoming more like a cultural phenomenon.

Fan: Another big part of that was — I think our timing was pretty good. We talked about how the game came out on casual game portals and Steam. It was all on PC. When we started making the game, the interesting thing was, the iPhone didn’t even exist yet. Then, midway through, toward the end, we got wind of this really cool Apple phone coming out. Right after Plants vs. Zombies launched and had a lot of buzz around it, a team spun up at PopCap to put the game out on this untreaded new platform, the iPhone.

The iOS version was what really made the game become a cultural phenomenon. Nowadays, looking back, people think of Plants vs. Zombies more as a mobile game than anything else. Another huge factor was the iPad. That was also introduced right around then. In the very beginning, you would go on the iPad store and there’d be just a handful of games, and the only good one was Plants vs. Zombies. That benefited us a lot. You got an iPad and what cool app would you get for your new device? How would you show it off? What was the one thing to buy for your iPad? For a lot of people that was Plants vs. Zombies. A lot of it was the right place and the right time. 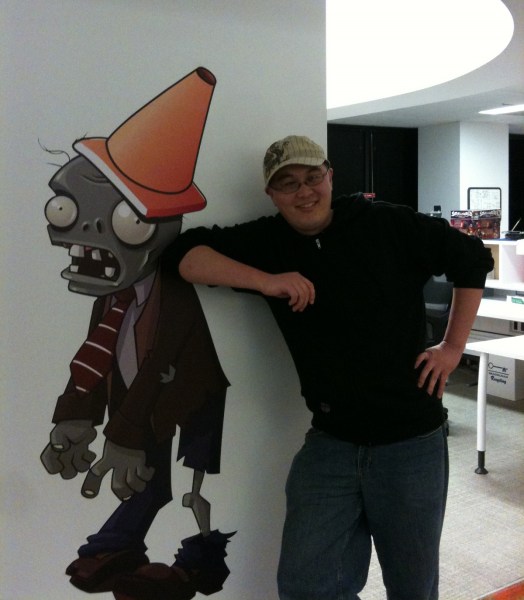 Above: George Fan and his buddy.

GamesBeat: Was your presence on the iOS devices a lot bigger than the PC?

Fan: It really was. We got Plants vs. Zombies in front of a lot more people that way. I don’t know what order of magnitude, but you’re definitely adding a zero.

GamesBeat: It was still a paid game, right? It didn’t use the free-to-play model that everyone was starting to talk about.

Fan: Yeah, it started off as a $2.99 game. Again, it was a question of — just the discrepancy of, if we were selling on PopCap’s site for $19.99, and you could get it on Steam for eight bucks, and then now you could get it on your phone for $2.99 — I said, “Okay, is this going to fly?” But the people that were pricing it had obviously thought it through, pricing it based on how other apps were priced. If we sold it for 20 bucks it just wouldn’t have sold.

Back then we also justified it with, well, you don’t get all the features you get on the PC. Initially the iPhone just didn’t have the processing power. We couldn’t do something like challenge mode or survival mode, where there’s hundreds of zombies on your screen at any time. We didn’t put that in the game initially, so that was kind of the justification. You get what you pay for on the PC because we have all these extra modes. But eventually all those made it over anyway. That’s just the result of it being the most popular way to play the game. Why not juice it up?