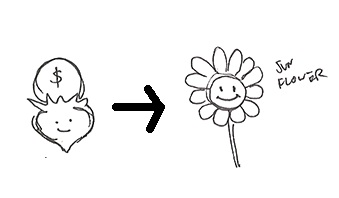 Above: A sunflower is born.

GamesBeat: You’ve also gone back to work at a bigger place. How is that for you?

Fan: It’s been so excellent. It’s a unique situation for me. My mindset is just more — I work better in small teams. I have more of an indie mindset. That’s just where I thrive. Working at a bigger corporation is definitely more of an anomaly for me these days. However, I’m also the biggest fanboy for Magic. That’s where I work at these days, at Wizards of the Coast.

It happened there was an opportunity for me to move up here for — it was supposed to be six months, working on Magic for a bit. I keep talking about how I need to put myself where I think I can contribute my strengths the most. I don’t think that’s where I should put myself long term, working on a game that already has a ton of designers that are great at what they do and have made the game what it is, made the game awesome. I don’t think I’m contributing to the whole gaming landscape as much as I could be if I stay here long term. However, it’s just something I couldn’t pass up doing. In some ways it’s a dream of mine to work with Wizards. I’m getting that out of my system. It’s been a blast.

This gig has caused me to do something very unusual for me. I’ve spent my whole life in the bay area and never really left. It was a pretty big deal for me to do this, my first time spending time living outside the bay area. But I don’t regret it at all. They’ve been treating me awesome there. I just really enjoy going in to work and getting to work on Magic, this game I love and I want to see improve. I realize my time here is limited, so I’m trying to seek out areas where I can help improve the game as much as I can while I’m here.

Fan: I can tell you about something that I would personally like to see, which is — this is a phenomenon I’ve noticed. Obviously I make games I want to play. For instance, I made Insaniquarium way back when, and the same thing happened with Plants vs. Zombies. I finished those games and thought, “This is a really cool game. I’d love to play it someday.” As a player, you know? There are certain things that you can’t really get, because they’re not going to be a surprise. You’re not going to be thrilled by new things as they happen. You’re the creator of it, so you know exactly what new plants you’re going to get, what new zombies you’re going to encounter. The thrill of that discovery isn’t there.

I keep thinking it would be great to do this at some point, but by the time — it’s rare for me to go back and play any of these games. I’ve spent hundreds of hours already playing them, to the point where I don’t necessarily want to — it’s either replay a game I’ve already spent 100 hours playing, and meanwhile I could be spending that time doing one of the many awesome new game experiences out there. I just tend to opt for that rather than go back and play something — I’m not going to be very surprised or delighted by the new plants I’m getting in a game I made, anything like that. 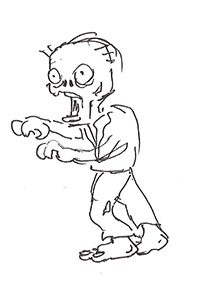 At the same time, I made the gameplay in Plants vs. Zombies like that for a reason. I would love to play someone else’s take on it. I would love to clone me, have myself make Plants vs. Zombies, not know any of the surprises that are in store for me, and play a game exactly like that. That would be amazing. I guess I’m saying that I’d love to play — I doubt this is going to happen, but I’d love to play a theoretical Plants vs. Zombies 3 that doesn’t ask me for money in the middle of it. It’s just a good old-fashioned great time. I can buy the game and get engrossed in this world and be delighted by these new plants I’m encountering and plan out my strategy against the new zombies I’m facing, not knowing what’s about to happen next because I actually made it. That would be something I’d personally love to see.

As far as the bigger scope of things, it’s pretty awesome that Plants vs. Zombies has branched out into other genres. That’s really neat. It’s bringing with it the same aesthetics and fundamental design values. One thing I realized is — Garden Warfare, I haven’t played that a lot, because I’ve never been big into first-person shooters, but one of the cool things about it is, say you’re a parent. You have a young kid and you don’t want them playing shooters because they’re all hyper-violent. For a while that was all there was. If you wanted to play a first-person shooter, you had to play something that’s pretty full of violence.

One of the really cool things about Garden Warfare was that now you have an option for your kids. If they’re interested in playing first-person shooters and you want something a bit more family-friendly, Garden Warfare is there for you. I thought that was awesome.

It’s been cool to see — when conceiving of Plants vs. Zombies I never imagined it to be anything more than the tower defense genre, partially because of what we talked before. Plants are really suited to being towers and zombies are really suited to being the bad guy when you’re trying to keep the gameplay on one screen. It’s such a great fit for that, but I didn’t know if it would be necessarily a great fit elsewhere. I didn’t imagine something like Garden Warfare because from what I know about plants, they don’t move. So how do you make a first-person shooter where you can’t move? They solved that by just making the plants walk on their leaves as if they’re legs. [laughs]

GamesBeat: Was there anything else you wanted to say?

Fan: I think we covered everything. Or we covered a good amount of stuff.

GamesBeat: You could say, grab Octogeddon on the Switch.

Fan: [laughs] Coming soon to a Switch near you, Octogeddon! Be a giant mutant octopus and destroy the world to your heart’s content, in your own living room or on the plane, wherever you decide to take the Switch.