PlayStation ramped up its marketing in April and ended the month accounting for 26.9% of all gaming-industry ad spend on national broadcast and cable TV. Meanwhile, ranking newcomer Peak Games beat out other big players to take second place.

GamesBeat has partnered with iSpot.tv, the TV ad measurement and attribution company, to bring you a monthly report on how gaming brands are spending. The results below are for the top five gaming-industry brands in April, ranked by estimated national TV ad spend. 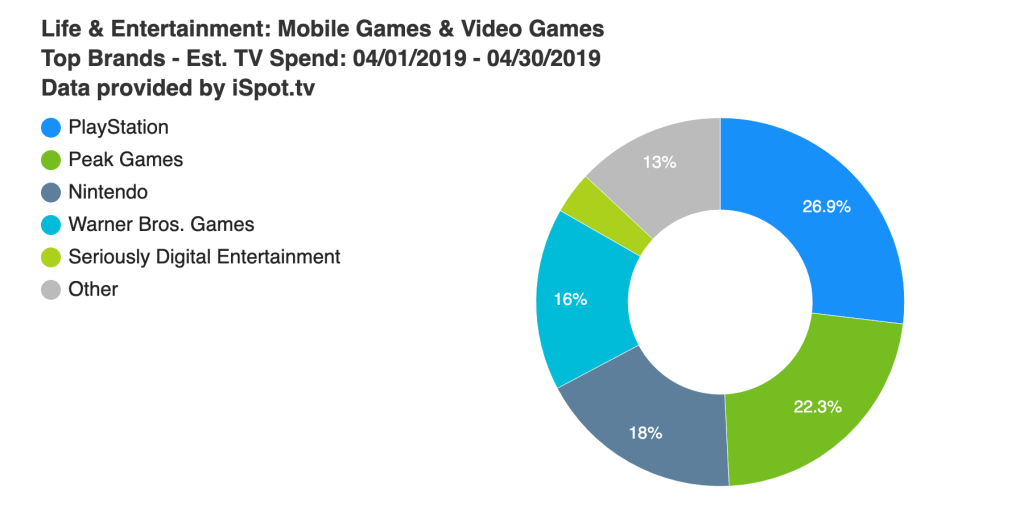 First place goes to PlayStation with an estimated spend of $7.9 million on just two spots that ran over 1,200 times, resulting in 379.8 million TV ad impressions. The spend was split nearly equally between “This World Comes for You” (est. $3.96 million) and “One Bullet” (est. $3.95 million), both advertising the game Days Gone. PlayStation allocated spend across networks including ESPN, TNT, and ABC, and during programming such as the NBA, the 2019 NFL Draft, and SportsCenter.

Peak Games, new to our ranking, takes second place with about $6.6 million in spend for three spots that aired over 2,300 times and generated 470.1 million impressions. “Toon Blast: Arms,” featuring Ryan Reynolds, was the commercial with the biggest placement budget, an estimated $2.6 million. NBC, Fox, and NFL Network were three of the networks with high spend, while the 2019 NFL Draft, The Voice, and the NBA were three programs that Peak Games prioritized.

With an estimated spend of $5.3 million, Nintendo claims third place. The company ran 12 ads more than 1,800 times, resulting in 244.4 million impressions. The spot with the biggest placement budget (est. $2 million) was “My Way: Yoshi’s Crafted World.” Three of the programs attracting the most spend were SpongeBob SquarePants, The Loud House, and The Amazing World of Gumball, while top networks included Nick, Cartoon Network, and Teen Nick.

Fourth place goes to Warner Bros. Games with an estimated total budget of $4.7 million to place three spots that aired over 1,200 times and garnered 378.4 million impressions. “Mortal Kombat 11: Old Skool vs. New Skool” had the biggest budget, an estimated $2.4 million. Warner Bros. Games prioritized spend across networks such as TNT, ESPN, and Adult Swim, and programming including the NBA, the NHL, and South Park.

Seriously Digital Entertainment rounds out the ranking with an estimated spend of $1.1 million on seven ads that ran over 3,300 times, generating 210.5 million impressions. The spot with the biggest placement budget (est. $357,772) was “Best Fiends: Collect Cute Characters: Howie.” CBS, Fox and NBC were three networks with particularly high spend, while Sports Stars of Tomorrow, Raw Travel, and Right This Minute were some of the top programs.