Too often, betting on esports matches can lead to frustrating waits, as tournament organizers deal with logistics and breaks in between matches. For esports wagering enthusiasts, this means a lot of waiting around.

This new kind of betting enables players to place a bet on which team will win an upcoming round of Counter-Strike: Global Offensive. This match has already been played at some point in the past, but the player does not know the outcome or which match. So the player can place a bet based on a random number generator (RNG) outcome. This constitutes gambling, and so it’s not legal in most of the U.S. 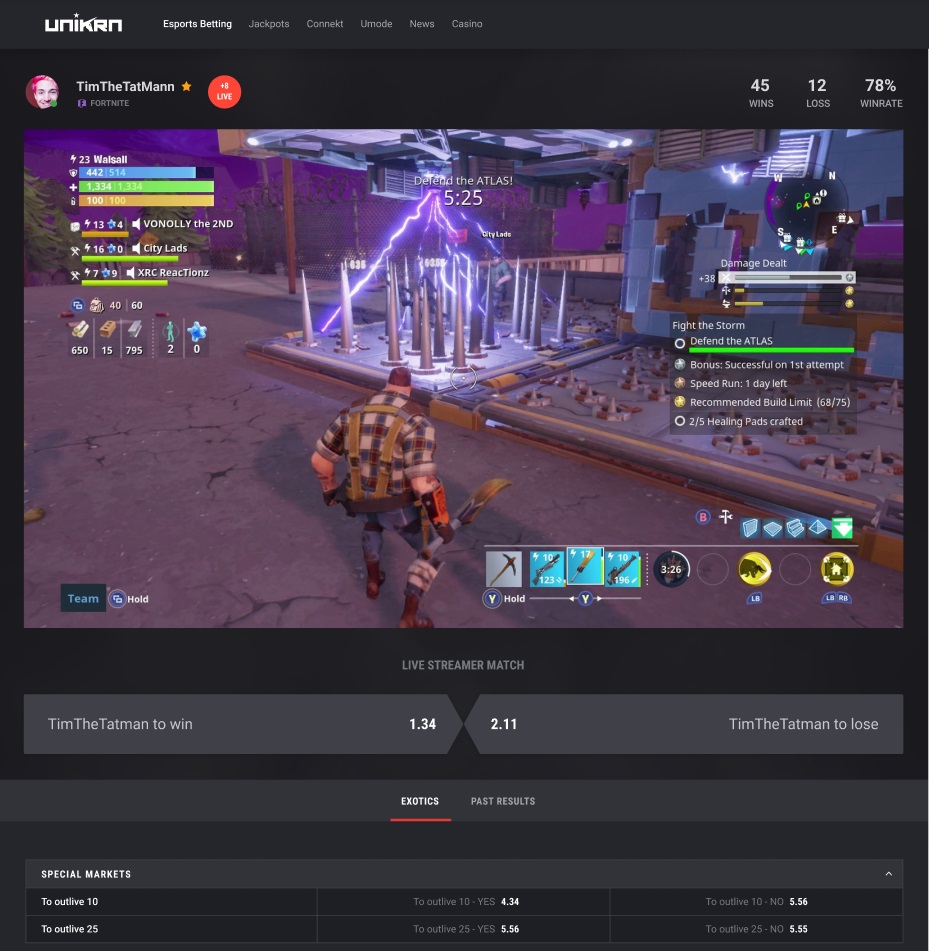 Above: Unikrn’s Umode lets you bet on your chances of winning a Fortnite match.

“Our goal with Unikrn Virtual was to bring unlimited content to esports fans,” said Unikrn CEO Rahul Sood in a statement. “We
succeeded. There’s never been a delay-free, 24/7 way to bet in on esports … until now. This is just the beginning.”

Unikrn Virtual is a regulator-approved RNG game which uses an approved third-party to randomly generate a round of CS:GO from an existing pool of past professional matches, giving fans the thrill of betting on live esports match without the delays or waits associated with live matches.

Rounds of CS:GO last under two minutes, meaning fans can bet on around 500 matches per day. In 2019, CS:GO has been the most popular esport in Europe and North America and has remained one of the world’s most-watched competitive video games for nearly a decade.

“Unikrn Virtual brings fans the excitement of live competitions, but in an always on format with faster resolution and fewer interruptions,” said Andrew Vouris, Unikrn’s chief operating officer, in a statement. “Unikrn Virtual will not only change quality and interactivity expectations for a bet-on-demand experience, but will fundamentally shift the future of the casino industry as we bring wildly popular esports without the baggage of downtime.”Unikrn will be launching with multiple exotic options to appeal to any user, including both true-random and expertise-based estimation categories (such as upcoming round number or final round score, respectively). Additional esports titles and major esports competitions will be added in ongoing rollout throughout 2019 and beyond.” 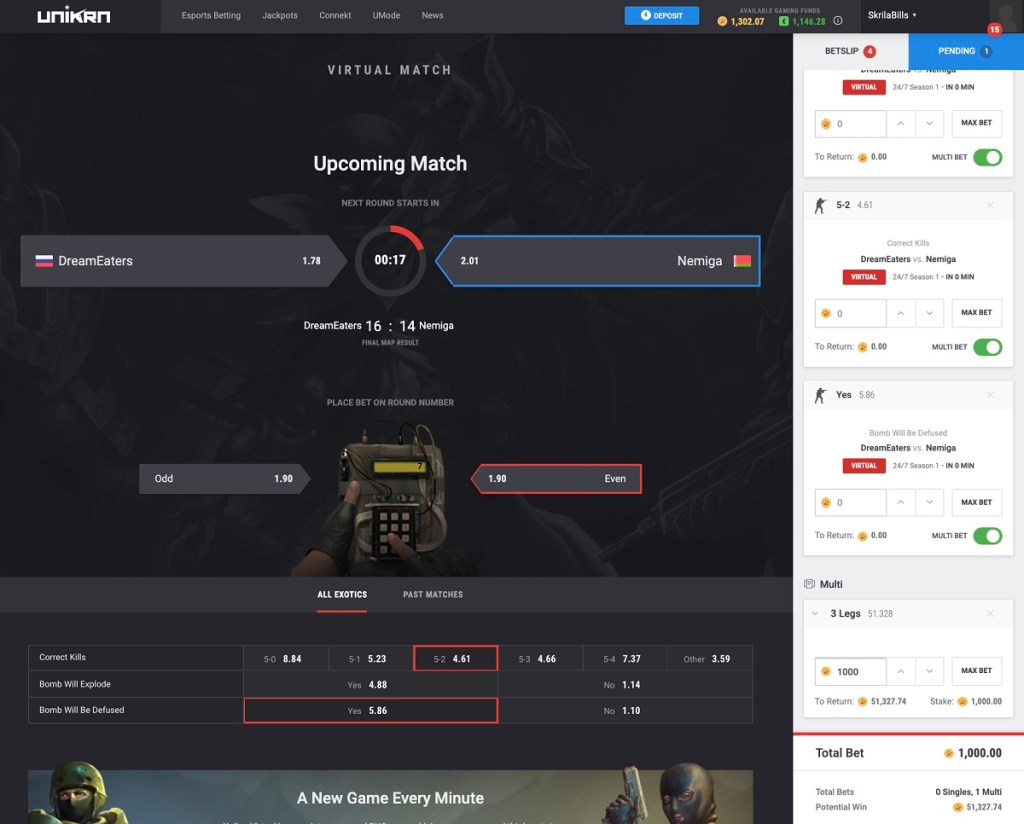 Above: Unikrn lets you bet on CS:Go matches from the past.

In another development, Unikrn has also created a new technology moat allowing fans to bet on any top streamer’s gameplay with fully automated odds updated in real-time.

Now Unikrn users can parlay a professional esports match and their favorite Twitch streamers, even all in one multibet.

Last year alone, over 1,000 millennia of viewer time was spent watching Twitch livestreaming alone, making the process of setting odds both daunting and essential for the future of the wagering industry.

By creating artificial intelligence trading bots which understand popular games, interfaces, stream components and odds generation, Unikrn Streamer Betting will be able to tap one of Earth’s most abundant sources of entertainment as an unending flood of engaging wagering content.

“Streamers are the future of celebrity, entertainment, performance and athleticism, so finding a zero-friction way to let fans engage and bet was essential for the future of our industry,” said Sood. “Not only are fans now able to watch and directly engage with streamers, but they’re able to experience the full thrill of victory along with the player on screen. This is a level of interactivity only dreamed of in the old world of sports and casino betting.”

This advanced system, which will include tracking of streamer performance for power fans, expands abundant and fastest-growing forms of popular entertainment for home viewers, mobile or on-site dual screen experiences.

At launch, Unikrn’s Streamer Betting will be available on four continents to audiences numbering in the hundreds of millions.“Unikrn is creating a fully-engaging platform to tap the potential of this unprecedented volume of competition-based entertainment,” said Vouris. “Streamers are the star athletes of a new generation, and they’re always on. Unikrn has made breakthroughs in technical and efficiency challenges which are shattering the mold of what is possible.” 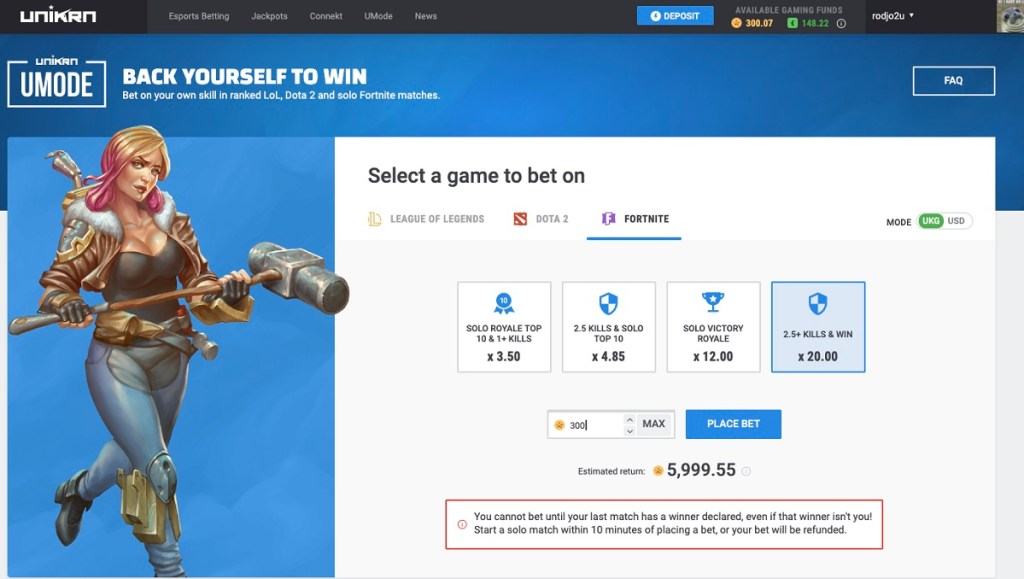 Above: Unikrn calculates your odds of winning a Fortnite match.

Right now, the virtual betting and streamer betting are part of Unikrn’s sportbook license and are not allowed in the U.S. Only parties outside the U.S. are allowed to make such bets now.

With Unikrn’s existing Umode betting, you can now bet on League of Legends, Fortnite, and Dota 2 matches. It sets odds for you in a skill-based wager. In a Fortnite match, for instance, you can bet on whether you will win the whole battle royale match, and Umode will automatically calculate the odds of victory. The odds for victory might be 20 to 1.

You can also bet on whether you’ll wind up in the top 10 with one kill or more, and the odds for that outcome are much better. Since Umode is based on skill, rather than random, it is not considered gambling subject to a license, so it it is legal to wager on such a game of skill in 41 states in the U.S.