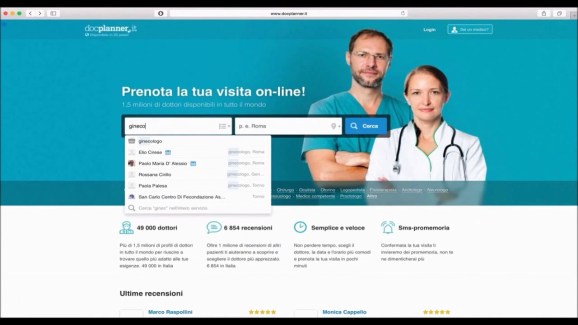 DocPlanner, an online doctor booking company founded out of Warsaw, Poland, is raking in the dough despite competition from international rivals. Roughly two years after it raised €15,000,000 ($16.8 million) in venture capital, it today announced the closure of a mammoth €80 million ($89.8 million) series E funding round led by One Peak Partners and Goldman Sachs Private Capital Investing, with contributions from Piton Capital and Enern Investments. The newfound cash — which brings DocPlanner’s total raised to roughly €125 million ($140 million) — will be used in a number of “strategic areas,” the company says.

Specifically, DocPlanner plans to accelerate the rollout of its software-as-a-service (SaaS) offerings in Europe and Latin America while furthering its R&D program. Concurrently, the company intends to expand its sales, customer service, product development, legal, and marketing teams as it considers acquisitions of cloud-based software companies, following the acquisition of Spanish rival Doctoralia in 2016 and Turkey-based Eniyihekim in 2014.

“This fresh funding comes at the best moment in the company’s history. The growth rate in our core business is accelerating, and we’re seeing more opportunities in our space, both in terms of customer segment and product offering, as the health tech market matures,” said CEO Mariusz Gralewski. “Since our last funding round, we’ve focused on the core marketplace and SaaS business; now we are making a concentrated push into new growth areas. This is an exciting time for DocPlanner, patients, doctors, and partners alike.”

Gralewski, a computer science graduate from the Warsaw University of Technology and cofounder of Polish professional networking site GoldenLine.pl, started DocPlanner with former Unilever veteran Lucjan Samulowski in 2011. The company’s core offering is a consumer-facing marketplace of over a million doctors, complemented by cloud services designed to facilitate appointment bookings and cut down on no-shows. Its portal enables patients to find a doctor, dentist, psychologist, dietician, or other specialists nearest to them and to review their experiences post-visit.

On the practitioner side of the equation, DocPlanner offers a toolset that allows clinics and private practices to manage their profile and calendars with automatic reminders. They optionally pay a small fee to advertise their services.

It’s hardly a new idea. In the U.S., New York-based ZocDoc has secured more than $220 million to connect patients with doctors, while France’s Doctolib recently raised €150 million ($170 million) at a valuation over €1 billion. Elsewhere in Europe, Luxembourg-based Doctena two years ago acquired German rival Doxter, and in India and Singapore, Lybrate and DocDoc have nabbed millions for similar propositions.

But DocPlanner has managed to outpace its competitors by aggressively expanding to new territories and markets. The company — which now operates in 15 countries — says it’s the largest health care platform in Poland, Turkey, Spain, Italy, Czech Republic, Mexico, Brazil, Colombia, Argentina, and Chile and that 1.5 million appointments were booked through its platform in the last month (up from 340,000 bookings per month in May 2017). Moreover, DocPlanner claims that 30 million unique patients and 2 million active doctors use its suite every day and that its websites host a total of 2.4 million patient reviews.

“We have been very impressed with DocPlanner’s strong growth trajectory, outstanding technology platform, and talented management team,” said One Peak Partners’ Humbert de Liedekerke. “We see enormous potential to accelerate the digital transformation of the health care industry and look forward to helping DocPlanner further consolidate its position as the world’s largest and most innovative digital health care platform.”

“DocPlanner has been at the forefront of digital innovation in health care for the past seven years,” said Goldman Sachs Private Capital Investing’s Christian Resch. “We are impressed by what the business has already achieved for patients, doctors, and clinics. We are excited to invest in DocPlanner and work with the company’s strong team on their roadmap to further improve patient and doctor experiences.”

DocPlanner’s workforce of 1,000 employees is spread across office complexes in Warsaw, Barcelona, Istanbul, Rome, Mexico City, and Curitiba. The company plans to hire 100 more people in the coming months.