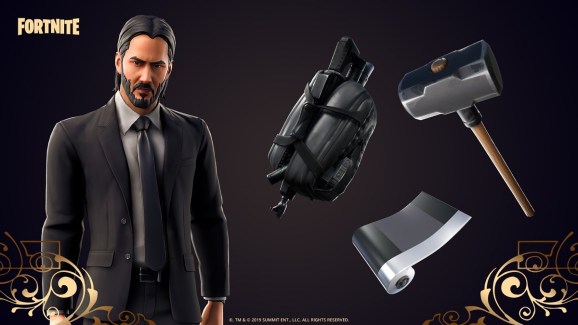 Lionsgate and Epic Games have collaborated on another John Wick in-game event in time for the launch of the latest Keanu Reeves film.

The premiere for the third film in the series, John Wick: Chapter 3, is set for May 17. The event includes a Wick’s Bounty LTM (Limited Time Mode) and free John Wick Challenges so players can earn free rewards, including Gold Coin Back Bling, the One Shot Glider, and the Boogeyman Wrap.

Additionally, players can jump into the in-game shop to purchase the John Wick Set, which includes the John Wick Outfit along with the Simple Sledge Pickaxe.

Eliminating a player awards one gold coin for every elimination they have, plus however many bounty points the target had. The top three coin leaders are displayed on a HUD scoreboard (Bounty Leaders).

As players cross certain point thresholds, they become more and more visible to the players around them. Coin leaders can be seen by everyone on map/compass when they are moving or shooting.

Coin leaders will have a gold/silver/bronze glow around them. Once a player crosses the last point threshold, they will remain on the map and have the alt Wick skin for the rest of the match, even if they lose the point lead. The first to 1,000 tokens wins the match.

Peter Levin of Lionsgate and former MLG executive Mike Sepso spoke at our recent GamesBeat Summit 2019 event. Here’s a video of their talk.