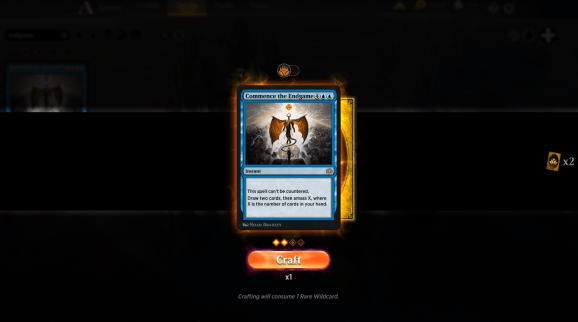 Magic: The Gathering — Arena hasn’t tried injecting story into this digital adaption of the world’s biggest collectible card game. But beginning May 23, it’s going to try to tell the story of big moments in Magic history with War of the Spark: Chronicles, a five-week event that dishes on lore, introduces a new game mode that’s never been in official paper Magic, and new cosmetic rewards.

War of the Spark: Chronicles tells the story of the Elder Dragon Nicol Bolas’ invasions of the plane of Ravnica and quest to become a god — and the resistance against him. Hearthstone has had some success with telling stories over the past five years, and that helps it rule the roost in a digital card game market that research firm Newzoo estimates could be worth $2 billion by 2020. Magic: The Arena could be a significant challenger to Hearthstone, and its frequent events (it does something special each week, akin to Hearthstone’s Tavern Brawls). But Hearthstone also offers single-player modes, like the Dalaran Heist that launched today.

The first Magic: The Arena event begins Thursday, May 23, with “Ravnica at War.” It’s a modified Momir event — you get a 96-card deck full of lands, like in past Momir events. And you spend mana up to how many lands you have to get a random creature. But your deck will also have 36 planeswalkers — one for each in the War of the Spark set. As you rack up wins, you’ll unlock the stained-glass card styles for War of the Spark planeswalkers. You can buy these as well.

Arena is also introducing a new playstyle with one of the events: Counters. Now, Counters aren’t new to Magic, and they do play a big role in War of the Spark with the Amass (that either creates a 1/1 zombie army or adds one or more counters to it) or Proliferate (which adds a counter to everything with one already, including planeswalkers).

Format: Momir with 36 planeswalkers in a 96-card deck.

Format: Pauper (you can only build decks with Common rarity cards).

Format: Singleton (you can only use one copy of a card to build a deck, not the standard four that’s part of Magic deckbuilding rules).

Format: Counter (you get an emblem that puts an extra +1/+1 counter on anything that has one already, an additional loyalty counter on a planeswalker, and Amass 1).

Format: Ravnica Block (you build decks from the Guilds of Ravnica, Ravnica Allegiance, and War of the Spark sets).