Nvidia reported earnings and revenues that were well below last year’s figures, but the graphics and artificial intelligence chip company beat analyst expectations and is climbing back up after a couple of weak quarters.

Nvidia reported revenues of $2.22 billion, down 31% from a year ago, for the first fiscal quarter, which ended April 28. Non-GAAP earnings per share were 88 cents, compared with $2.05 a share a year ago. But those numbers beat expectations. In after-hours trading, Nvidia’s stock was up 6% to $169.70 a share.

For the past couple of quarters, the Santa Clara, California-based company has been recovering from the slow launch of its new RTX graphics cards and the aftermath of the cryptocurrency bust.

Nvidia is in the middle of a refresh cycle for its graphics processing units (GPUs), based on its RTX architecture, which enables real-time ray tracing. Those chips got off to a slow start last fall, as games weren’t ready to make use of them.

But the company is growing again, compared to the fourth fiscal quarter. 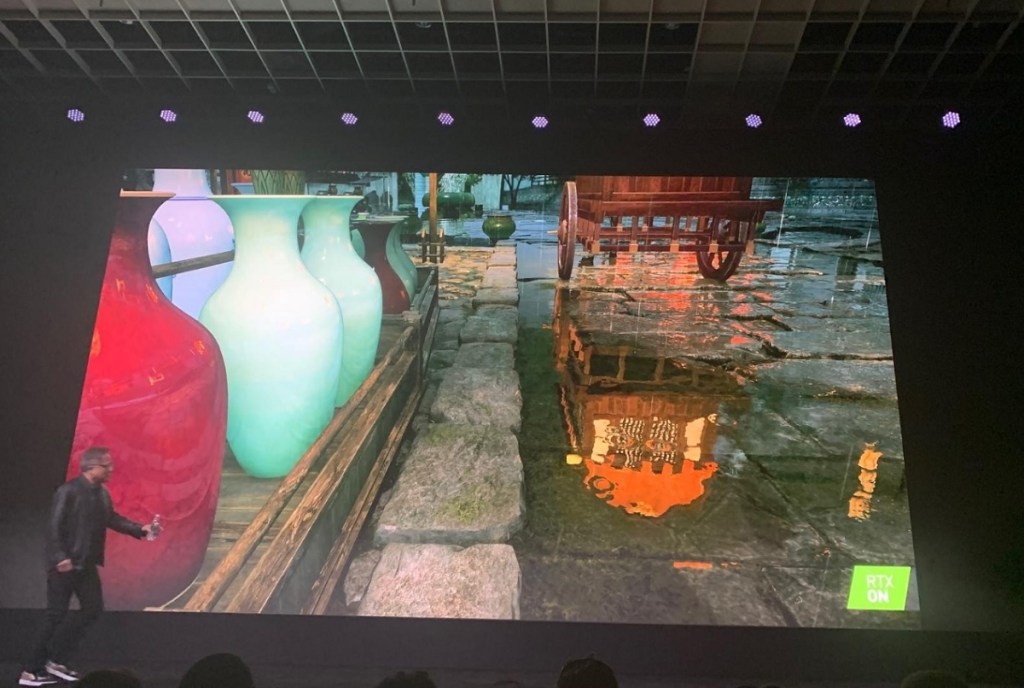 “Nvidia is back on an upward trajectory,” said company founder and CEO Jensen Huang in a statement. “We’ve returned to growth in gaming, with nearly 100 new GeForce Max-Q laptops shipping. And Nvidia RTX has gained broad industry support, making ray tracing the standard for next-generation gaming.”

He added, “Despite the near-term pause in demand from hyperscale customers, the application of AI continues to accelerate. AI adoption is accelerating in the world’s largest industries, moving beyond the cloud to the edge, where AI processing has to be instantaneous. We’re excited about our pending [$6.9 billion] acquisition of Mellanox, which will help us drive datacenter architecture for high-performance computing and AI from the cloud to the edge.”

GPU business revenue was $2.02 billion, down 27% from a year earlier and up 2% sequentially.

The year-on-year decrease reflects declines in gaming and datacenter revenue, as well as the absence of $289 million in [computer maker] revenue from cryptocurrency mining processors (CMP).

Professional visualization revenue was $266 million, up 6% from a year earlier and down 9% sequentially. The year-on-year increase reflects strength across both desktop and mobile workstation products. The sequential decrease largely reflects a seasonal decline.

Datacenter revenue was $634 million, down 10% from a year ago and down 7% sequentially, primarily reflecting a slowdown in purchases by certain hyperscale and enterprise customers, partially offset by growth in inference sales.

Automotive revenue was $166 million, up 14% from a year earlier and up 2% sequentially, primarily reflecting growth in AI cockpit modules.

Original equipment manufacturer (OEM) and other revenue was $99 million, down 74% from a year ago and down 15% sequentially. The year-on-year decrease is primarily due to the absence of $289 million from CMP sales.