Forgive the pretension, but I’ve been on a lot of VR studio tours. I’d say on average most have lasted around five minutes, consisting of one large open-plan floor in which developers bob their heads up from their monitors and give a quick wave upon hearing their name. They’re cozy, friendly and I might even get a cup of tea out of it.

My tour of Sony’s London Studio, on the other hand, lasted roughly about three hours. It spanned three floors of the team’s central-London offices. And that’s not mentioning the extensive demo room and interview access I was provided in Sony Interactive Entertainment’s European offices next door. Oh, and I could have had all the tea I’d ever dreamed of, had I so desired.

Sony London is not your average VR development studio. 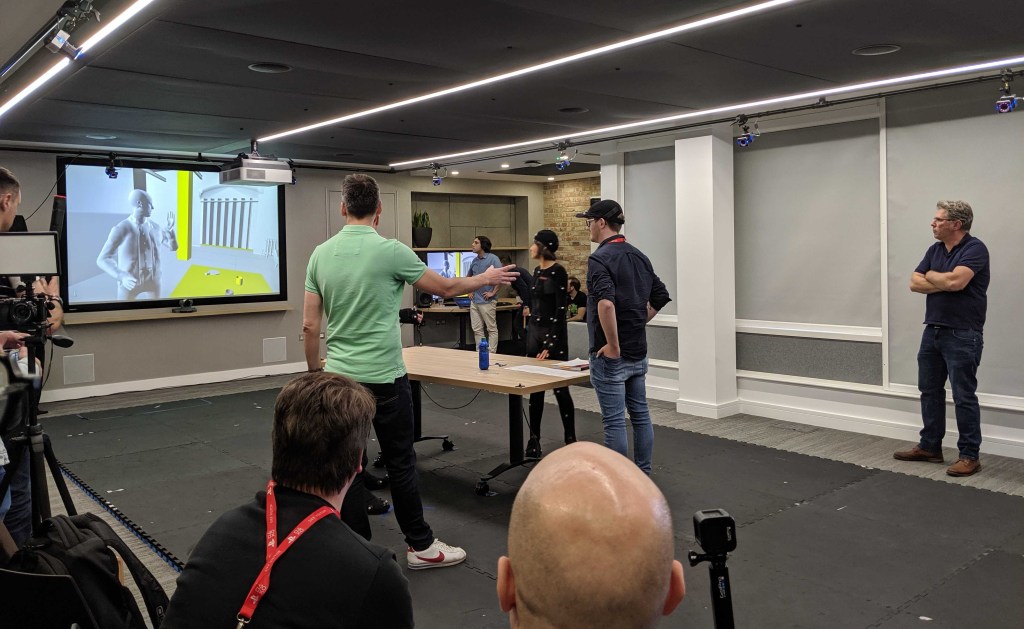 Over the course of the day I’m led on a frankly dizzying tour of the Blood & Truth team’s facilities. It starts with their boardroom, turned into a makeshift mo-cap studio, aligned with an army of bleeding-edge cameras. There I see two actors recreate a mission-bridging cutscene, occasionally stealing glances at the ‘camera’ (a journalist wearing a motion-captured cap).

These sequences weren’t actually shot here but in Sweden, where the developer was able to record facial animations it would later apply to the highly-realistic character models it’s been working on downstairs. 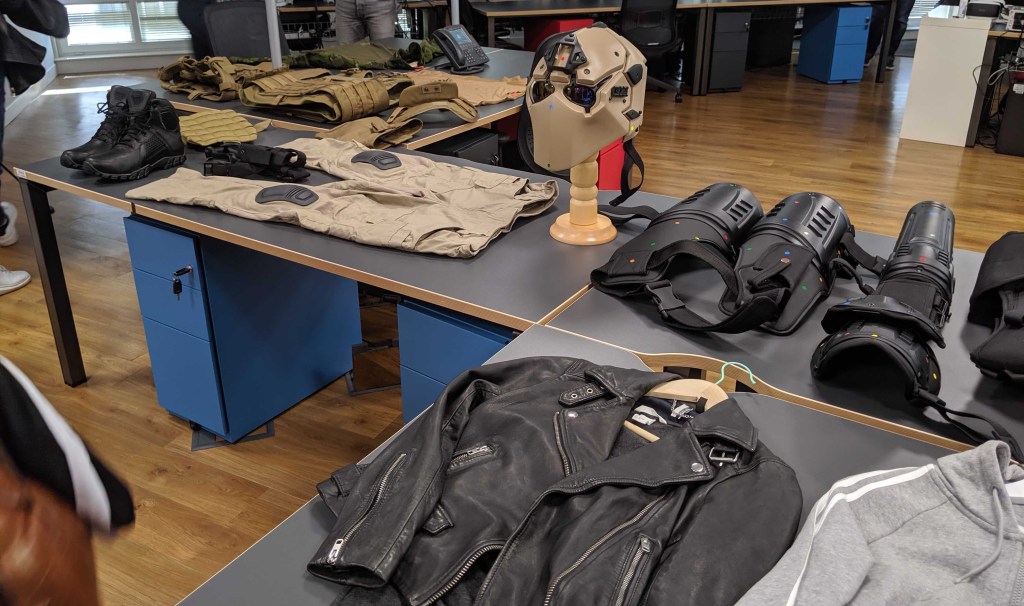 In the character design department a vast wardrobe of costumes is laid out on a table in front of me. Some of these, I’m told, were bought from security companies to provide an authentic reference point for the game’s trigger-happy enemies. They’re virtualized and then fitted to immaculate character models, easily more detailed than any I’ve seen on PSVR.

Then an environmental artist shows me how the team digitally mimicked London’s arresting skyline with the help of drone flights, procedural generation and (of all things) some old textures from Sony London’s The Getaway.

After that I’m whisked down another flight of stairs where the game’s design lead takes us through challenge missions on a 70-inch TV. Just outside, the effects team shows us the work that’s gone into an Uncharted-worthy set piece in which a crane cuts through a building. Finally, I’m shown two of the three (at least I think it was three) audio rooms. One exhibits the endless number of layers that make up the in-game audio. The other has videos of the recording sessions for the game’s soundtrack, which mixes London grime with Bond-level orchestral epicness.

The message Sony is sending is clear: Blood & Truth isn’t some half-hearted bone thrown toward the fraction of PS4 users that own a PSVR. It really has got the weight of the publisher that brought us God of War, Uncharted 4, and Spider-Man behind it.

I couldn’t definitively tell you if those resources have been well-spent just yet, but it’s looking promising.

So much of Blood & Truth shows so much promise. Forget the flashy gunplay, for a moment; in the game’s opening scene I’m dwarfed by the figure of James Bond actor, Colin Salmon. At over 6.3 feet in height, he’s a pretty terrifying proposition in VR, firmly putting me in my place with his unflinching steely gaze. Extensive facial capture work, recorded alongside mo-cap performances that lavishly refined in the character art department, makes this one of the most impressive face-to-face encounters I’ve had in VR. But it requires players themselves to, well, play a part.

“When we look at the characters reacting to you, we try and design and spend our dev money in the areas [where] it’s trying to react to players who are playing it properly,” Director of VR Product Development Stuart Whyte tells me. “If people want to throw things at people, be trollish, we don’t want to put a lot of dev time into that because it’s more about focusing on just that realism vibe.”

“I think a big departure for us from The London Heist is The London Heist characters were all very stylized,” Whyte adds. “There’s kind of like a rule of thumb in VR that photogrammetry doesn’t work and we wanted to try it with this game. It was really challenging from a casting point of view.”

And yet they seem to have pulled it off. Character models, I’m told, were given extra lighting features that developers wouldn’t need to implement in traditional games. Moreover, the cast puts in the kind spirited performances expected of a Guy Ritchie movie. That is to say Blood & Truth is extremely cheesy in its depiction of London gangs (I still fondly recall being labelled a “f***ing plonker” in my last demo) but in a knowing, celebratory way.

More importantly, though, Blood & Truth seems to have genuine consideration for its platform in every strand of its DNA. It adheres to some of the core thrills of the first-person shooters (FPS) we’ve been playing for decades, whilst also deviating from others in meaningful ways. Ammo clips, for example, are generous in count to mimic the seemingly unending number of rounds Hollywood heroes can fire before needing to reload. Lockpicking is simplified to a few twists of a Move controller and stylish slow-motion sequences paint giant white targets on things that will explode when shot.

It’s not a game about difficulty in the traditional sense (Whyte tells me he would “hate to hear that anybody didn’t finish Blood & Truth because they got to a hard bit and didn’t complete it”). There are Normal and Cinematic modes out of the box, and a Hard mode will be added in as free DLC later on, but Blood & Truth’s true form isn’t concerned with pushing your shooter skills to the test. In fact, it’s not too dissimilar to Star Wars: Vader Immortal in that it puts experience first and adds complications only when necessary. 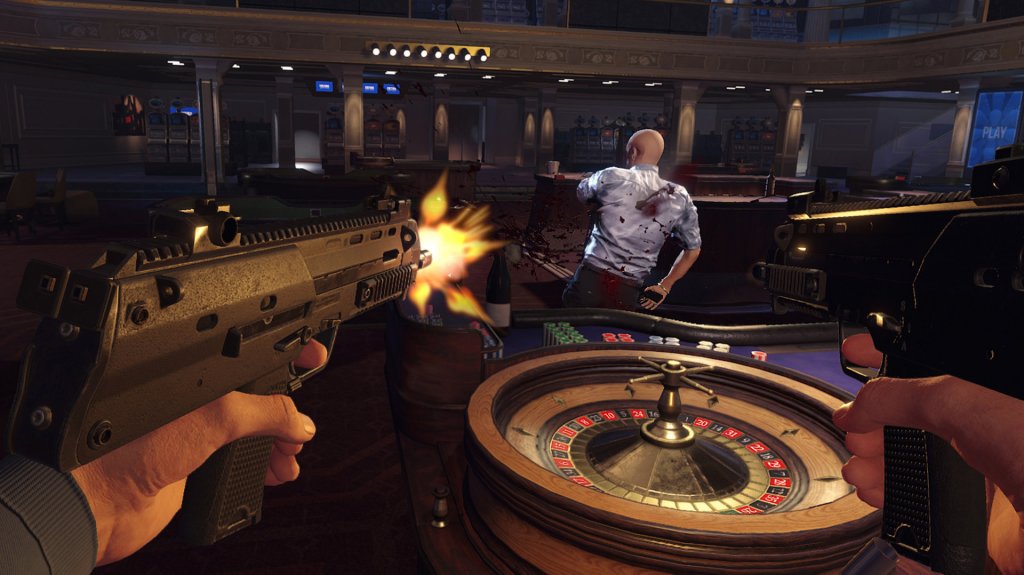 “I sometimes do use the word ‘experience’, but then I kind of check myself because I know for some gamers that can be a massive turnoff and I don’t want that,” Whyte says. “I kind of liken it more to, back in the day, playing SSX. I loved SSX because it made me feel cool as a player. And when we think to our pillar of being the action hero, there were so many design decisions we took around that.”

One such decision, I’m surprised to learn, was to actually remove one button function just weeks before the game launched.

“Picking up ammo, putting it in a gun, the physicality of that was super powerful,” Whyte explains. “We experimented– literally we took this feature out weeks before release. There’s a spare button on the controller. We had square to reload. And actually from a gamer perspective, shoot, shoot, shoot, square, shoot, shoot, shoot, square works brilliantly. But we found that the physicality you get in VR, having to grab and reload, that kind of feels a bit more like friction from a player point of view, but in your mind it really embeds you so much more in the sense of presence and immersion.”

I spot a few more of these choices in my latest demo, taking me through the game’s opening mission. I love the way Blood & Truth highlights points of interest in the game world with a chalky overlay. I love how it doesn’t shy away from bringing you up close to its cast of characters. And I love Sony London’s genuine desire to get your heartbeat pumping, be it in an all-out synchronized assault across some rooftops, or getting you to hang from the edge of a shipping container dangled in mid-air.

And yet I still can’t escape my fear that all of this glamor and glitz won’t go beyond the surface level. We’ve seen a lot of Blood & Truth over the past two and a half years but often in five minute slices that showcase a sufficient amount of bangs and bullets. Each demo has been fun in its own right but they don’t give much sense of the cohesion that ties it all together. This week I’ve seen the individual threads that suggest there’s more to the story than a simple shooting gallery. Now it’s time to prove it.

Whyte’s words give me hope.

“There’s what we call intensity fatigue,” he says. “It’s just like, when you’re in the middle of a fire fight, it just gets so crazy and tense that you actually need to break up the game. Pacing within VR and certainly within Blood & Truth is something that we’ve found super critical. It’s not just one long gun fight. You’ve got to break it up it…the interactions, the drama, the exploring the environment. There’s a lot of subtlety to getting that right.”

That’s what I’ll be on the lookout for when the game launches at the end of this month.