If you’re sad like me that the Game of Thrones show has come to an end on HBO, you can still get a fix of the show’s universe in the form of games. Look no further than Warner Bros.’ Game of Thrones: Conquest.

That mobile game debuted in October 2017, and Warner Bros. Interactive Entertainment has been updating it ever since. I wrote about it back in October when the San Francisco-based game studio announced that players would be able to own and fly their own dragons in the lands of Westeros. While the TV series is expiring, not so the mobile title.

The strategy game was developed by a WB Games studio that was formerly known as Turbine. The Boston studio transformed itself into a mobile game studio and acquired The Tap Lab, another mobile game studio, in 2017. Sensor Tower, a measurement firm, said that Game of Thrones: Conquest has grossed more than $214 million in revenues on iOS and Android. 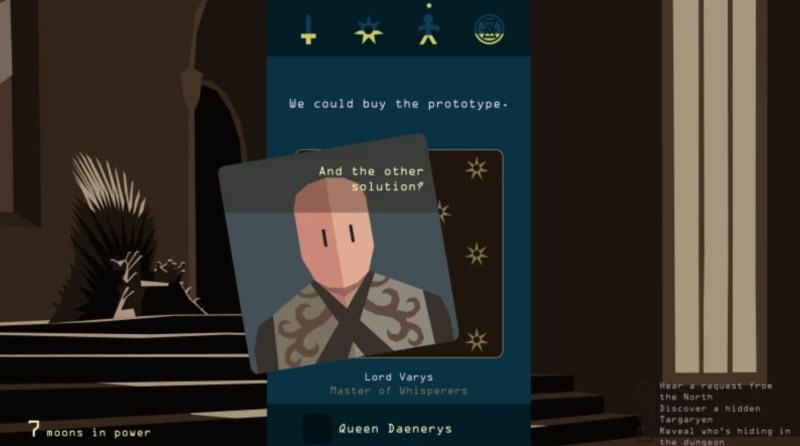 Above: Reigns: Game of Thrones has characters that respond to your Face ID.

You can also play Reigns: Game of Thrones, a strategy game developed by Nerial in partnership with HBO and published by Devolver Digital. This mobile game spinoff from the Reigns series uses characters from the Game of Thrones franchise. It was released in October 2018 for Android, iOS, Linux, MacOS, and Windows. It came out on the Nintendo Switch in April 2019.

In this title, you can swipe left or right to accept or decline a proposal before you. As Daenerys Targaryen, you have to decide on how to rule your kingdom, and every choice has an impact on things like the military, religion, popularity, and wealth.

Sadly, that’s about it. After a six-year run, Game of Thrones: Ascent was shut down on January 3, 2019. No explanation was given, but the audience for that game had dwindled. Telltale was also working on a Game of Thrones Season 2 title, but that disappeared when the company shut down last fall.