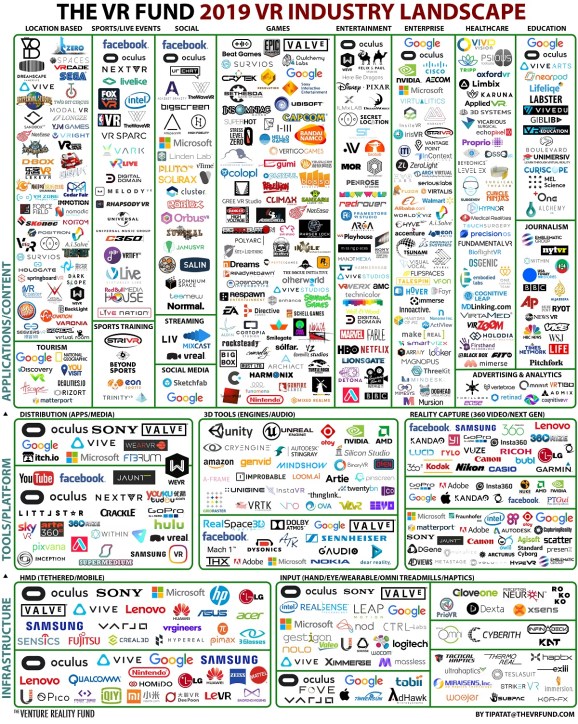 The VR Fund landscape for VR.

The Venture Reality Fund said it is tracking over 550 companies on the virtual reality landscape.

One of the bigger funding deals in the beginning of the year was for LBE company Sandbox VR. While IMAX shut down their VR efforts, others — like Cinemark and Spaces — are launching in the market with LBE locations at movie theaters.

In health care, the VR Fund saw continued interest in training — with funding for GibLib, Fundamental VR, Precision OS, and others, as well as investments in treatment, with Proprio, Oxford VR, and more. Next-generation reality capture is especially notable since it unlocks new experiences for both VR and AR and shows the industry moving past 360 video.

Consumer VR is really heating up, with the launch of Oculus Quest at the end of the month and VR HMDs like the Oculus Rift S and the Valve Index addressing the pro-sumer market with noticeable improvements over the previous generation. Sony also announced that it sold over 4.2 million PlayStation VR units, and Nintendo jumped into VR with the Labo VR and VR integration for its flagship properties Mario and Zelda.

Indie developers are finding big success in VR, with Beat Saber the first VR title to sell over 1 million copies in under a year (for over $20 million in revenue), mirroring the way Angry Birds and others were able to find early success on the emerging smartphone platform.

Companies like Superhot Team announced they have made more revenue from their VR than non-VR titles, which further validates the opportunity for developers.

Enterprise VR is also gaining ground in big ways, with high-end offerings from Varjo, HP, and HTC Vive providing a lot more features and functionality than the new consumer spec head-mounted displays. Oculus is also getting more serious about the enterprise, with enterprise bundles and services support coming in the fall.

There are plenty of big success stories for enterprise software in VR, as well, not only with Strivr training over a million Walmart employees but also companies like Gravity Sketch helping Ford design cars and Virtualitics helping data scientists at Kuehne+Nagel optimize supply chains and doctors at Cedar Sinai save lives.

Overall, results from early 2019 show just how big VR is becoming, and strong indicators suggest that after years of slow but steady adoption the technology has reached a major inflection point. VR adoption is expected to accelerate, thanks to the efforts of large players like Facebook, HTC, and Sony, as well as the many startups out there winning fans and customers and making millions along the way.