Blizzard Entertainment isn’t taking you to the beach this summer — instead, you’re going to the hot, sweaty, and loud secret lab of Dr. Boom. Get ready for Rise of the Mech, a Hearthstone: Rise of Shadows event that begins June 3 and ends July 1 that gives players a new Legendary Mech, permanently improves (or “buffs”) two cards from each class (18 in total), and ushers in the first two-month rotation in the Arena.

Hearthstone rules the roost in a digital card game market that research firm Newzoo estimates could be worth $2 billion by 2020, and events such as Rise of the Mech help engage players who may be feeling tired of the metagame or bring back others who have lost interest or drifted off to other games. The news also comes a day after Blizzard announced a round of nerfs that target some of the most oppressive decks in the metagame. 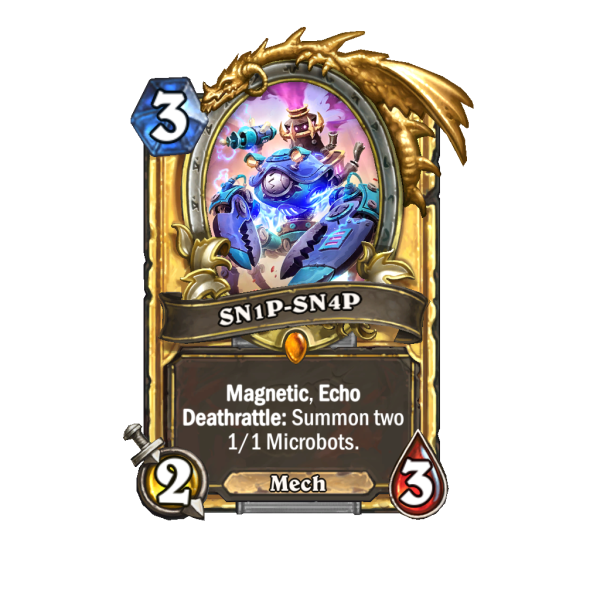 Above: Don’t get snippy with this bot.

The event also introduces SN1P-SN4P, a Legendary 2/3 Mech that costs 3 mana with the keywords Magnetic, Echo, and Deathrattle: Summon 1/1 Microbots. Y’all get a Golden one, too, the first time you log into Hearthstone during the event. This card will be part of The Boomsday Project when it comes to when it’ll rotate out, and you can craft it with dust as well — but it won’t be in any card packs.

A change is in the cards

This signifies a potential shift in how the design team will approach card changes in the future. Blizzard has never made so many at once — and never on the heels of a nerf announcement. Its idea is to make these changes and see if it results in these cards seeing more play.

“It’s a new, different change. We’ve never really done something like this before. Think of them as card buffs!” a Blizzard spokesperson said over email. “We’ve always ‘nerfed’ a wave of cards; we’ve never ‘buffed’ a big chunk before.”

All of these changes are permanent, Blizzard said, and will stay after The Boomsday Project rotates out of Standard next year. “These are not changes made just for the event,” the spokesperson said said.

I asked Blizzard if these changes are coming because of the upcoming rotation in Arena. When the company announced the Year of the Dragon back in February, it also said that Hearthstone’s draft mode would now have two-month-long seasons. These would rotate in new sets with each change. I asked if these card changes were timed for when the first Arena rotation would hit, and a Blizzard spokesperson said, “When it comes to events we look at what makes sense at the time. In this case, the timing just made sense!”

Rise of the Mech will also see the end of the first Arena season of the Year of the Dragon. These are the sets rotating in. Basic and Classic remain.

These are the sets rotating out:

It’ll be interesting to see how the Arena community receives this set list. Longtime players will recall how Goblins vs. Gnomes created n fast, supercharged meta, and many don’t remember it all that fondly.