Who makes a covert operations stealth game where you’re in a kayak? It sounds like a dumb idea, but I played a preview of Phantom Covert Ops recently on the Oculus Quest virtual reality headset.

And it was fun. nDreams is making the title for Oculus Studios. Coming out this year, the game turns the player into an elite covert operative who sneaks into a flooded Russian military compound. You have to sneak around the hostile wetlands, take out your targets with silencer, and disable enemy installations like a satellite tower. If you’re caught, you’re pretty much dead.

I spoke with Lewis Brundish, the game director at nDreams, about how the studio tackled the task of making this unusual stealth game for the Oculus Quest and Oculus Rift VR headsets.

The game is coming out later this year. Here’s an edited transcript of our interview. 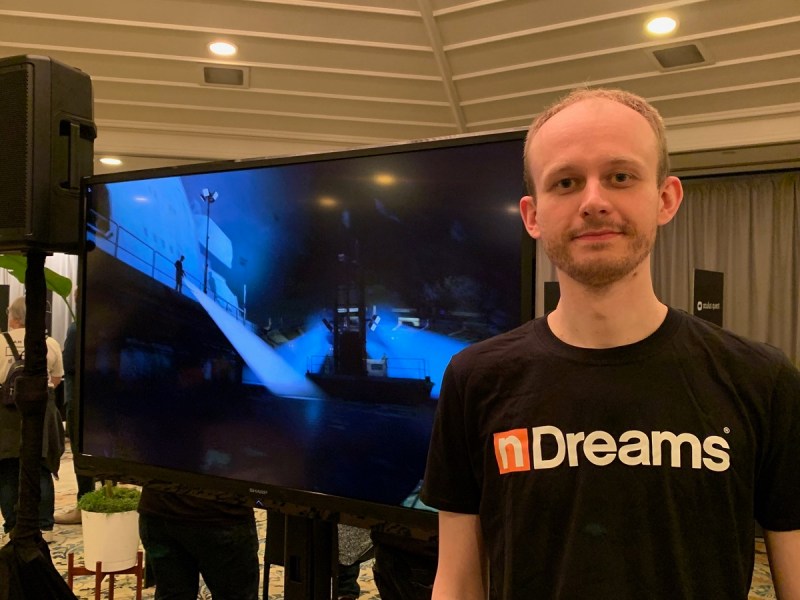 GamesBeat: How long have you been working on Phantom Covert Ops?

Lewis Brundish: The concept started probably around 18 months ago, maybe two years. I forget the exact dates because it’s something that came together quite naturally out of prototyping and various ideas we had.

GamesBeat: What have you done before in VR?

Brundish: We’ve been working in VR for five years. As soon as the Oculus DK1 came into the studio, everyone knew that’s what they wanted to do. We saw the potential there. We’ve done a bunch of VR games. We’ve done the “Perfect” games, like Perfect Beach, those experiences. We did The Assembly, which was a narrative-driven game a few years back. Shooty Fruity is probably the latest one. We published Bloody Zombies. We’ve been around in VR for a long time. This is our fifth game, something like that.

GamesBeat: What led you into this stealth-military space?

We went through loads of iterations on how the boat would work. We went through boats with motors and two-person kayaks with other people in them. We were just prototyping different ideas. We didn’t know if any of them would work. But as soon as we got near the version you played today, we knew it would work. Then the stealth game wrapper fell very neatly around that. 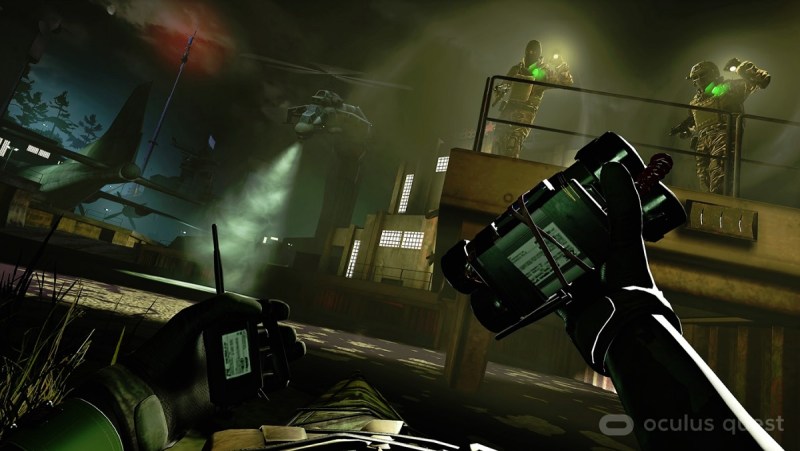 Above: You can plant bombs in Phantom Covert Ops

GamesBeat: I don’t think anyone has done kayaking in a stealth game before.

GamesBeat: You could turn it into a sports game later.

Brundish: Right, we’ve got all the tech. It’s one of those things—I hope you can attest from playing the demo, but you hear it and think, “Oh, that’s an interesting idea.” But when you play it – this is how we felt in the studio – it just works. It immediately works. The two things complement each other really well. When you pick the right setting, like this flooded Cold War naval base in the early ‘90s, once the environment is built so it’s waterlogged and there are channels everywhere and the ground is a bad place to be, it just clicks immediately with the boat. The stealth mechanics of hiding in the reeds, timing your movement to get past lights, going underneath the guards, it all clicks really well.

GamesBeat: I shot out a light to get to the radio tower.

Brundish: Yeah, that’s the thing. It’s great to have more people playing the game, because the way we designed this, we tried to go in at the start with—everything has to work exactly as the player would expect. That’s not just—the movement has to really tactile and one-to-one and working as you’d think. But then the environment—if you can see anything in the environment that you feel like you should be able to do, then we want to make sure you can do it.

It’s cool to hear that you discovered you can shoot out lights. You can shoot fire extinguishers as well, to create distractions. You can throw your ammo clips in the water to distract guards. You can grab things in the environment and pull them, move them. Anything that players want to do, we try to make sure that can happen. In early playtests of the game we had our C4 remote explosives that you could place and detonate. We found out that some people were trying to shoot them to detonate them instead of using the trigger. So, okay, we’ll make that work. The next person tried throwing them in the air and shooting them in midair. That wasn’t working, so we had to make that work.

That’s how we’ve designed it. It’s great getting the feedback from you guys playing today. We’ve not had any yet, but if anyone tells us about something that they wanted to do and couldn’t, we’ll try to make sure that happens. 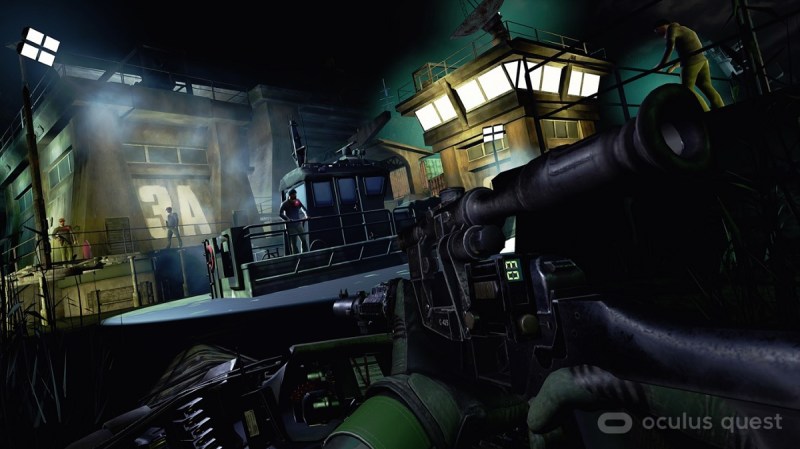 GamesBeat: How much more work do you have to do?

Brundish: We’re targeting a release this year. But there’s still a lot to do. We don’t have a specific number of hours we’re shooting for. We want it to be narrative-driven. The game is going to take place over the course of a single night in this one location. You’ll get there just as the sun is going down, and then the events of the story will play out throughout the night. The sun is rising at the end, just as you reach the finale.

We also want to make sure the missions are full of replay value. You saw at the end of the demo that you get these medals. We award medals for pacifism and speed, but we also award medals for killing everyone. We want to have real, meaningful replay value, where players want to come back trying different equipment, trying different approaches, and trying to unlock everything.

GamesBeat: How do the guards sense you, or otherwise figure out there’s somebody there? Does the sound of the water alert them?

Brundish: Because we’re quite early in development right now, a lot of that stuff is still coming online. But things that will play into that are how close you are to lights, how illuminated you are, and also how much noise you’re making. Possibly even how much movement you’re creating. These are all things we’re working on. 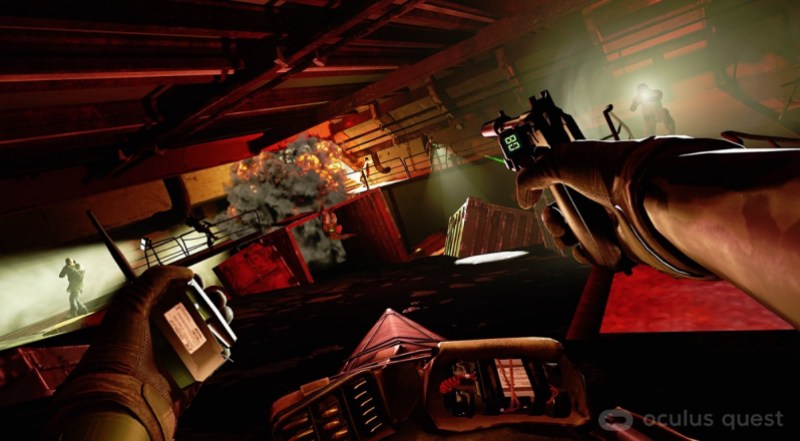 GamesBeat: Is stealth VR becoming its own genre, do you think?

Brundish: We’ve found that, just like with horror—when horror games came to VR it was a real step up for that genre. The level of fear and visceral reaction that people felt was something they’d never experienced on other platforms. We really believe that stealth is the next big genre that can be lifted up in that way.

I love stealth games, and when you play a stealth game on a TV, you can understand that the situation is perilous or tense. You’re hiding in a bush while a guard is coming and you get that you’re close to being found. But you don’t feel it the way you do in VR, when you’re crouching in the reeds and trying to stay silent and there’s a torch passing right over your head, a guard standing right next to you. As soon as we hit on that we thought, “Wow, this is really cool.” We think stealth is going to be a big thing in VR. 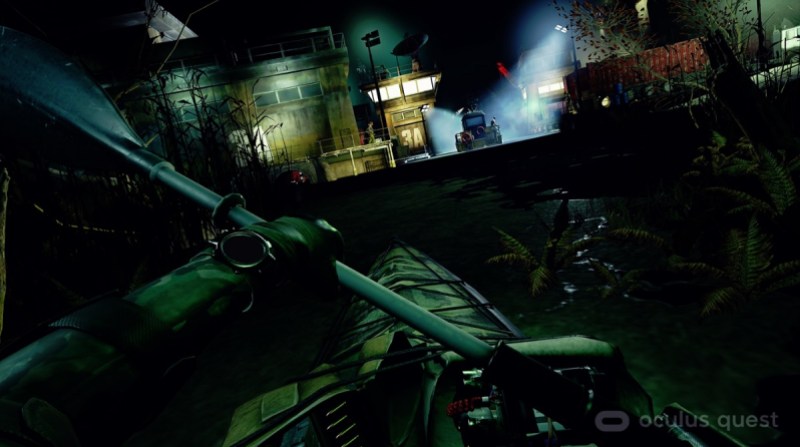 Above: Phantom Covert Ops puts you in a stealth kayak

GamesBeat: How many kinds of environments do you have?

Brundish: Narratively the game all takes place around this flooded military installation on the coast of the Black Sea. There’s obviously quite a lot of diversity in what we can do with that. You have the forests surrounding the area. You have rocky canyon areas. You have the docks of the naval base. You have ruins, these abandoned buildings. In the demo you played today you started in the woods and went through a base. There was a shipwreck where you could paddle through the interior. There’s tons of variety, but it all comes together to form this cohesive location.