Animoca Brands has raised $2.5 million in funding for The Sandbox blockchain gaming platform. Animoca’s Pixowl division is remaking The Sandbox as a blockchain-enabled game, with user-generated content that players can buy and sell with real digital ownership, thanks to the blockchain, or a transparent and secure decentralized ledger.

Animoca Brands and its subsidiary Pixowl said that they raised the money to create a sandbox world where players can create their own virtual experiences.

“The Sandbox offers everyone access to a new economic model where players and creators fully participate in the value creation chain and can benefit from the new paradigm where content is the platform,” said Arthur Madrid, CEO of Pixowl, in a statement.

He said in an email that the aim is to attract investors who can help the company create a global ecosystem for a blockchain game.

He added, “We are excited to be one of the first blockchain-enabled games.”

This investment round is led by Hashed, the largest crypto assets fund and accelerator in South Korea with operations based in San Francisco and Seoul. Additional investors include Helix, Mind Fund, Blocore, ThunderCore, and Alexis Bonte. 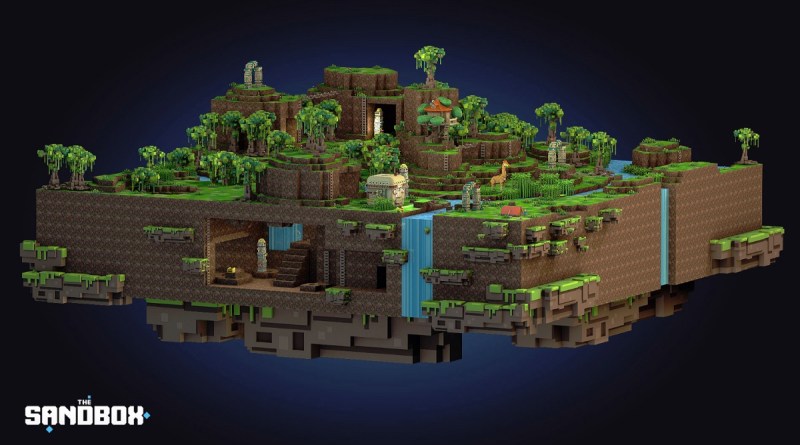 Above: Animoca Brands acquired The Sandbox developer Pixowl for $4.875 million.

The investment will accelerate growth of Animoca Brands’ user-generated content (UGC) gaming platform that will empower creators through digital ownership and monetization of 3D voxel creations made and shared by users around the world. Through the investment from Hashed and other investors, and the partnership with Kakao’s Klaytn blockchain platform that will grant access to Korea’s leading messaging app, The Sandbox is increasingly reaching Korea’s advanced marked for gaming and technology.

The integration on Klaytn, the public blockchain platform supported by 50 million users of Kakao, the mobile lifestyle messenger service owning 97% of South Korea’s market share, is also expected to boost the audience for The Sandbox.

Development progress on The Sandbox can be seen in a new teaser video released today in conjunction with the announcement, showing a demo of one of the many available biomes where users can create voxel items and gaming worlds from the digital equivalent of building blocks.

The Sandbox game franchise is one of the world’s largest independent user-generated content and gaming platforms. The earlier version had more than 40 million downloads and over one million monthly active users.

In The Sandbox, any creative person can make their very own static or animated voxel objects. Doing this is as easy as using building blocks, and the creative process is aided by the platform’s powerful, intuitive VoxEdit software that empowers anyone to create and animate 3D objects.

Animoca Brands’ vision is to offer a metaverse where virtual worlds and games will be created collaboratively without central authority. Because game items are tokenized as Non-Fungible Tokens (NFTs), players can transfer their assets from one game to another, retaining digital scarcity, security, and authenticity.

These tokens will be tradeable in a free and open decentralized marketplace for voxel creators and world builders. With rich, easy to create voxel worlds and game experiences and the ability to safely store, trade, and monetize creations through blockchain, creators can receive significant benefits for their creations.

“Our vision for the future of decentralized gaming is that NFTs are a catalyst for mass adoption,” said Sebastien Borget, chief operating officer of Pixowl, in a statement. “Players will benefit from NFT interoperability across games, giving items a value beyond their utility based on factors such as an emotional attachment to their creator, the fame of previous owners, or track record across games.”

Players will be able to monetize the time and effort they’ve invested in playing by buying and selling NFTs using the “SAND” token, which is the official currency in The Sandbox. This utility token offers multiple uses that will empower players through community voting, staking mechanisms, crowdfunding, and decentralized governance.

As an open user-generated content platform, The Sandbox allows curation to scale with community, rewarding SAND owners with a community role and a potential revenue stream. Creators can be penalized if they don’t respect the rules set by the community and creators can post ideas to be developed and receive funding for development from the community via SAND tokens. Artists can be paid by creators to produce voxel models required by them. Furthermore, users can vote on the theme of an upcoming creation contest or sale event, or on the next software features. 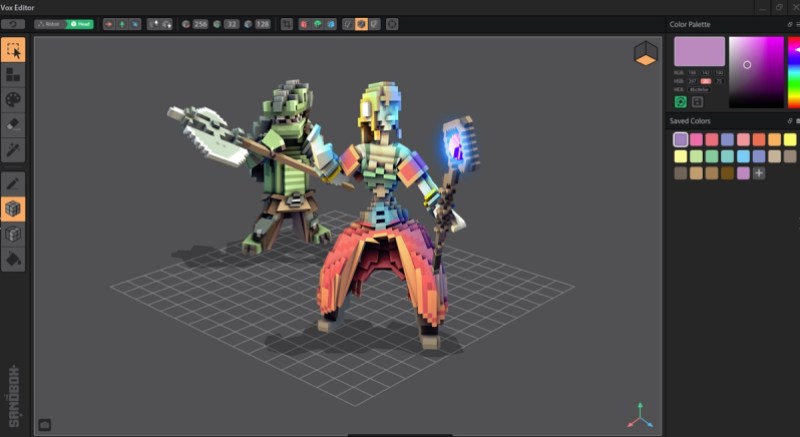 Above: You can create voxel characters for The Sandbox.

“Hashed considers crypto games to be one of the best testing grounds for experiencing the virtual world that blockchain will bring to us,” said Ethan Kim, Partner of Hashed who is leading Hashed Labs. “We expect real-world economic activities based on blockchain to come true when the value derived from the virtual world can be distributed and maximized under decentralized protocols. In the same vein, Hashed believes The Sandbox, where users can monetize their experience through User Generated Contents (UGC), can be one of the leaders realizing and pioneering this virtual world. With its first onset, Hashed aims to contribute to the soft landing of The Sandbox to the Asian market, along with building up a strong community full of talented developers, designers, and users.”

The Sandbox is preparing for its next major milestone: the launch of its Marketplace in Q3 2019. The Sandbox will be offering a high-quality, curated content selection of artist-made voxel models that can be collected for their scarcity and special attributes, in preparation for scripting their behaviors and putting them inside a map to generate new gaming experiences.

“We are proud to add recognized leaders such as Hashed and Blocore to the backers of The Sandbox, which was named one of the world’s most anticipated blockchain games,” said Yat Siu, cofounder and chairman of Animoca Brands, in a statement. “Our new partners have a keen understanding of blockchain technology, gaming, and mass markets, and will prove invaluable to Animoca Brands and The Sandbox as we continue to break new ground and bring blockchain to the masses.”

The Sandbox is expected to launch in the fourth quarter of 2019, and more information will be revealed in the coming weeks and months.