Tencent’s mobile game revenues outside of China has more than doubled since from the fourth quarter of 2018 to the same period in 2019. This is according to a new mobile games report from IHS Markit and Priori Data.

This is thanks in large part to PUBG Mobile, which has been a big hit for the company. The battle royale game achieved growth of 189% between the fourth quarter of 2018 and 2019’s first quarter. It is outperforming mobile battle royale rivals Fortnite and Knives Out.

“Net revenue for PUBG Mobile surged by 241 percent just between February and March, despite a continuing — although marginal — downward trend in downloads,” notes IHS Markit analyst Louise Shorthouse. “This suggests that existing players are being better monetized in-game by Tencent.” 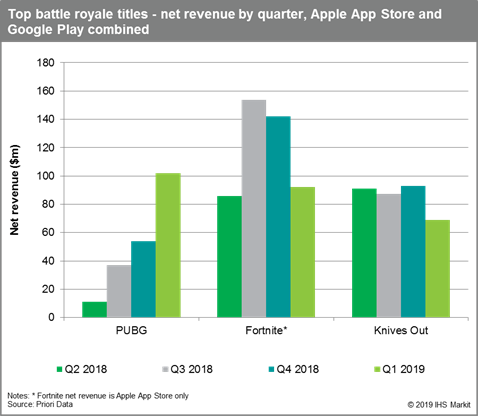 PUBG Mobile’s popularity has helped Tencent’s revenues outside of China increase by 209% between Q4 2018 and Q1 2019. Tencent competitor NetEase saw a 22% decrease during the same period.

“This burst of international success for Tencent comes in the wake of domestic market disruption,” notes Shorthouse. “The nine-month freeze on the game approval process in China in 2018 impacted the well-prepared plans of all the domestic games publishers, pushing the biggest players to capitalize on the somewhat untapped international opportunity. As the effects of the freeze linger, IHS Markit expects Tencent and NetEase to continue to build their exposure to international markets, thus competing more directly with major games publishers from other regions.”