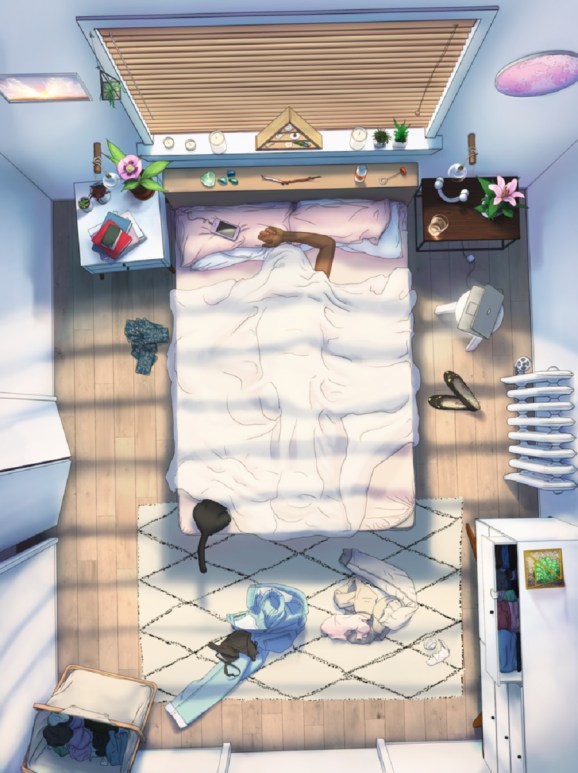 Brie Code and the team at Tru Luv wanted to have a safe space, a shelter, a place for taking care of ourselves.

So over the past few years, the team (headed by Code in Toronto and Eve Thomas in Montreal) created #SelfCare, a game-like app that they call a digital companion. As it’s name suggests, it’s all about relaxing, breathing, and taking care of your mind and body.

While it has game-like elements, it’s not really a game. The goal is simply to feel better. There’s no winning, no failure, no score. No difficulty, no ads, no notifications. And it sounds like an idea whose time has come. In a world where being busy is a point of pride, there are cracks in the sanity of everyday life.

Activities like yoga and meditation can accomplish the same feeling. But sometimes you just want to get rid of stress in other ways. In #SelfCare, you can do things like pick up dirty laundry, do breathing exercises, or just lie in bed. I talked to Code, a seasoned game developer, about the making of #SelfCare and the thinking behind the smartphone app that can reduce your stress. The team collaborated with research advisor Isabela Granic, an anti-anxiety expert and professor at Radboud University in the Netherlands.

Code (former artificial intelligence lead on Assassin’s Creed) and Thomas released #SelfCare on iOS and Android in August, 2018, and they recently added a Journal feature that lets users record their thoughts. I felt better just talking to Code. 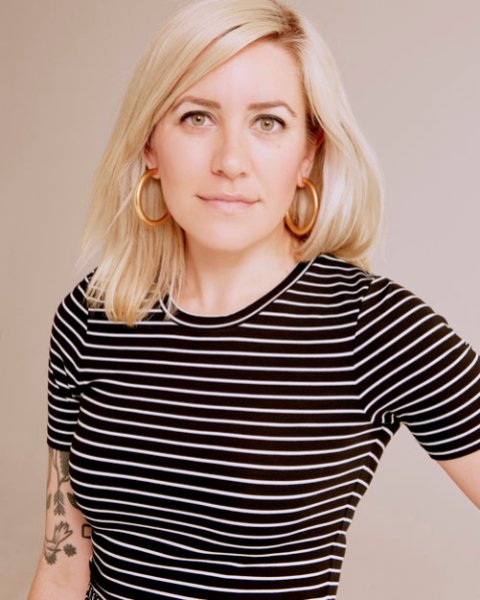 Above: Brie Code is the CEO and creative director at Toronto’s Tru Luv.

GamesBeat: How long did you work on the #SelfCare app?

GamesBeat: Is the adaptive journal a major update for you, then?

Code: Yes, it’s the beginning of—the exercises we put into #SelfCare at first, we wanted to test if we could use the tend and befriend reaction the way that the fight or flight reaction is used in normal game design. Most games, you make an increasing balance between frustration and reward. That puts the player in a flow state. I wanted to know if we could do something similar with, instead of frustration and reward, care and connection.

When we released #SelfCare last August we put in a few different mini-games that have different—instead of going from easy to hard, instead of having that frustration/reward curve, they did things like go from awkward to smooth, empty to full, disconnected to connected, messy to tidy. That can also create an interesting experience that feels fun to play, but using tend and befriend instead.

It worked. The feedback we got from users about that is that they found—I tuned it so that each of those attractions would last about three to five minutes. Then you put it down naturally at the moment when you’re feeling good. Unlike most game design, which goes from easy to hard and you put it down when you get frustrated, using this you put it down when you feel good. We found out that worked. Users were saying that this app really relaxes them. Those three to five minute interactions were about relaxation.

Once you’re relaxed, that’s an excellent state for learning or personal growth. The journal is the beginning of a new direction for the app that’s about personal growth and strength development. 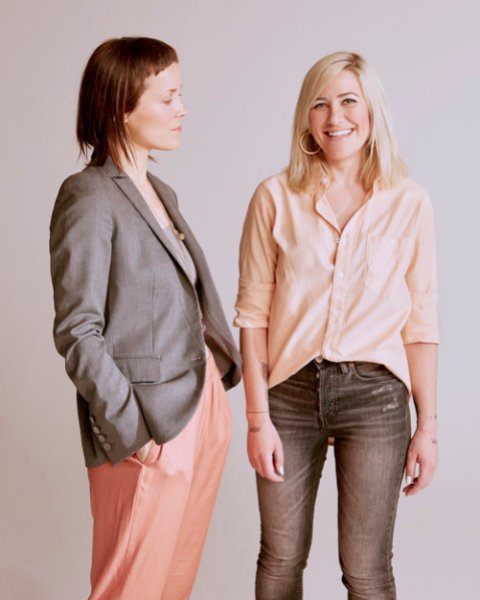 Above: Eve Thomas (left) and Brie Code of Tru Luv.

GamesBeat: What was the original inspiration and some of the research behind the app in the first place?

Code: We discovered things as we went. First, we started just by looking at the tend and befriend reaction. Then, when we made the partnership with Dr. Isabela Granic at the Games for Emotional and Mental Health Lab, she worked with us to look at how we could use tend and befriend and other research to design the set of mini-games. The new direction with the journal has a lot to do with—she’s moving into a focus on narrative identity. She’s going to be publishing a paper soon.

Going much further back, there’s a story I like to tell about the moment that I changed my career. There were a couple of key moments in my career. I went into video games because I wanted to do something that helped people and brought people joy while using my computer science degree. I graduated when the dot-com crash happened and there weren’t many jobs left in the web, and I didn’t want to go work at a bank. I wanted to do something that was creative and that helped people, so I ended up in video games.

I didn’t think much further beyond that. I liked the technical challenges of it. I loved working with a team. Video games require you to work with so many different disciplines – artists, designers. But I never thought much about the cultural implications of our work until we made Brotherhood. One of my colleagues had worked hard to make sure that there was more than one Assassin in Brotherhood, and that there would be women included.

It was during the very end of the project and we were working very hard. I was very busy and overwhelmed. I was rushing through the metro one evening, and there in the metro was a poster for Assassin’s Creed: Brotherhood that was life-sized, and it hadn’t really occurred to me before, the scale of what we did, but people lives were affected by what we did. I was thinking of it more as an intellectual exercise, that we should make this game in the right way, but not really thinking about the people on the other end.

Finally I saw this life-sized ad and realized that what I make is used by millions of people. I hadn’t really thought about that. It’s real. It’s out there in the metro, just like a shoe ad or something. It’s not small, what we’re making. And as I was staring at this poster thinking about that, a teenage girl walked up and she stopped and stared at the same poster. Then she walked up and put her hand out and touched the woman Assassin. I was standing watching her and thinking, “Oh my goodness. It’s important that we did that.”

That was the first time I changed my focus in my career a bit. I got involved in a lot of diversity work. I’d always been involved in diversity stuff. For the first five years of my career I was the only woman programmer on any project I was on. I was the only woman on the dev team at one company. I was always trying to fight for us to hire more women, things like that, but I hadn’t gotten fully into it.

After Brotherhood and Assassin’s Creed III, I became very interested in why we weren’t engaging a lot of people I know, particularly more feminine people. They just didn’t seem interested – my friends, at least, outside work – in what I was making. Why not? I realized that it was a much more interesting problem than just getting more female protagonists in games. We also need to think about why a lot of people are just not interested in this. 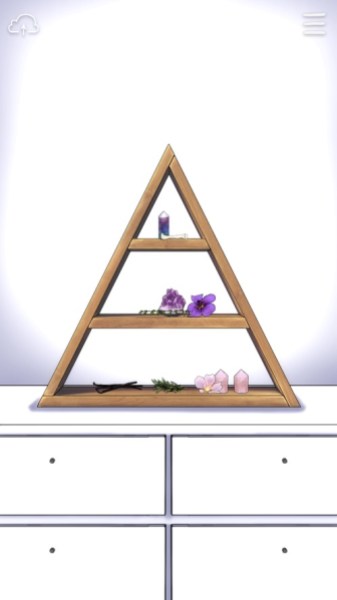 Above: The #SelfCare companion.

I moved on to Child of Light, and that was a first try at making something that my friends who aren’t interested in video game would like. Child of Light, I loved working on the project. We had an amazing team. I built a diverse team there, very intentionally. I balanced the team as much as I could as far as race, gender, age, level of experience, what country they came from. I tried to build as balanced a team as possible, knowing that that would be our best chance at making something that also appealed to a wide range of people.

I think it shows in some of the innovations we made in Child of Light, like the work we put in to make her hair move beautifully. She feels like she’s underwater all the time. A lot of the technical innovation on the programming team went into things like that, things that I might not have thought about earlier in my career, because it wasn’t a priority. But we still didn’t engage the audience we thought we would engage. It sold well, but I was still trying to my impress my friends, and my friends outside of work still found the controls too hard. It wasn’t compelling enough to compete with a natural experience for them.