GamesBeat: Taking care of someone can be a satisfying outcome, then.

Code: Right. I’ve been saying that what we’re making is not a game. It’s a companion, a new kind of product. We’re building it on a few different psychological frameworks. We’re starting to integrate more features for growth as well as relaxation. The journal is the first step in that.

GamesBeat: What sort of feedback have you heard since it came out?

Code: The feedback has been amazing. Leading up the launch, a lot of my mentors were worried about me. They thought I was wrong. They thought that this wouldn’t work, that this isn’t game design. I had pretty good playtest results, but every game design expert I knew was telling me I was wrong. My confidence was wavering, but I put it out because I knew there was something there. I had that gut feeling. But I wasn’t sure.

I was hoping to get a few thousand users so I could work with them to iterate and get to something that worked. What happened instead was that we had 500,000 downloads in the first six weeks, with no advertising. We still haven’t done any advertising and we’re well past a million downloads. We’ve had very good organic growth. We still get a lot of email and reviews coming in, but we were absolutely flooded in those first few weeks with people saying that—“It’s like it put me in a trance. It’s the most calming app I have. I feel like the little character is looking out for me as much as I’m looking out for them.” Things that directly confirmed the hypothesis — if we can create these reactions through these things that go from disconnected to connected, instead of easy to hard, people will feel a sense of calm and a sense of connection.

It worked right out of the gate. It turned out not to need any iteration. For the first few months after launch, we just listened to the users about what was working and not working, and made a few small adjustments. Then we decided that if we were right about that, we might be right about what we could do for personal growth. That’s when we started to work on the journal. 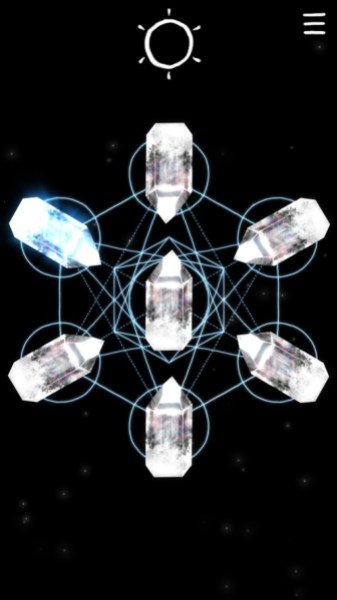 GamesBeat: How long have you been working on the journal element?

Code: About two months. I’ve had it in mind for years, but we’ve been working on it directly since around November.

GamesBeat: How big a team do you have?

Code: It’s all part-time. Right now we have 12 people, though. Mostly people working in their spare time.

GamesBeat: Have you learned much about the demographics of your users? Are they mostly women, or any certain type of people who use it?

Code: Of the people who write us, it’s a wide range of ages, from teenagers to older adults. It’s men and women. The majority are women, but we get a lot of men writing in asking us to add more customization so they can feel like it’s their bedroom. Right now it does feel like a woman’s bedroom. We will be doing all of that over time, when we can afford it.

GamesBeat: How much content is there in the app now?

Code: The mini-games take three to five minutes. It’s a very short experience. We don’t want something that holds the user for as long as possible. We want something that actually works to calm people down. I tuned it specifically so that you put it down after three to five minutes. You can reach for it if you feel a twinge of anxiety and you pick up your phone. You could end up at a social media site and half an hour late you think, “Oh my gosh, I just wasted half an hour.” Or you could end up in #SelfCare and put it down in three to five minutes feeling better and ready to get back to what you want to do.

GamesBeat: Have you seen any other apps that fit into this same category?

Code: I wouldn’t say that I’ve seen another app that does exactly what we’re doing with companions, but we fit in the larger self-care or wellness space. We were featured by Apple as one of the best of 2018 in the category of self-care apps, which includes Calm and Headspace. Those would probably be the most similar products to what we’re doing.

GamesBeat: Do you see doctors or others who might be recommending it?

Code: [Dr. Granic’s lab will be studying the impact of using #SelfCare over time. We’ve built it on an evidence-based foundation for calm and relaxation. And we’d like to see what we can do for users over time. We’re excited to find out more.]

My philosophy for companions—I look at other apps that are out there, and the paradigm for apps right now is either you have apps that track you and tell you what you’re supposed to be doing—they might start with some intrusive questions where you don’t even know why they’re asking them. They start giving you notifications like, it’s your bedtime, so you should go to bed now. It’s kind of bossing you around. Or you get other apps that present you with tons of options. Maybe you want to do a workout, so you go to the app stores and search for a workout app, and there are so many options you don’t know what to choose. You pick one and open it and it has tons of workouts in it, but you don’t know which ones you want. You’re supposed to be expert and boss the app around, and you don’t know how to.

Apps are almost always in a hierarchal relationship with you. Either the app is bossing you around or you’re supposed to boss around the app. With companions we’re trying to create a non-hierarchical paradigm where you help the app and the app helps you at the same time. By doing these mini-games you care for the character, and you also cheer up yourself. It’s a more natural exploration of the world, without needing to be the expert right away, and without being told what to do.

GamesBeat: Are you making money from this?

Code: No. The goal is to eventually make money from this, but because our target audience is people who don’t like video games—the implication is that if we can build interactive products leveraging this other stress response, there’s the potential to double the market. To reach that audience in the early stages, to be able to make sure that what we design works for them and we don’t end up designing something that just works for the existing audience again, it’s important that we make it—we need to invite that audience in. They’re not out looking for this new kind of product. It’s important right now that we invite them in.

GamesBeat: Do you feel strongly that this shouldn’t be called a game? Or is it just a different kind of game?

Code: I think it should be called a companion. The word “game” is too—what’s possible with interactivity is too broad for one term. We need many terms. The word “game” is quite loaded. For many people it means winning, which is that frustration and reward loop, the easy to hard curve, needing there to be a win condition. Some games don’t have winning, like simulation games, but there are a lot of assumptions about what pieces go into a game. 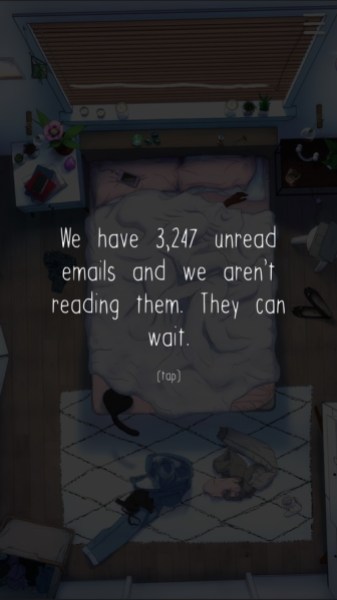 Above: Tru Luv turns your phone into stress reliever, not stress producer.

If you think about the whole world as a game world, then what we’re creating is just one NPC in that world. As we move into—say that in five years we have smart glasses and screens all over our house and we’re living in this AR world. The game worlds we engage with have merged with the real world and we’re living in one cohesive world, instead of many little worlds through this tiny window in our home. A companion is just one NPC in that world. You might have a companion for your morning exercise routine. You might have a companion for helping arrange your groceries. But you can think of it like an NPC.

GamesBeat: It sounds like it’s been a very satisfying thing for you to be working on.

Code: It’s the most fun I’ve ever had. The opportunity to sit and brainstorm with people who don’t like video games, and therefore have no preconceived notions about what should be in a game—they’ve just never gotten that deeply into them. For me it felt like it widened my perspective so much. I realized that I had a very narrow focus.

What informed me taking this direction in the first place is that diverse teams outperform expert teams. I read that, and I thought it was so interesting. Experts are all trained on the same knowledge base. They’re trained in the same procedures. They get stuck on the same problems, because they follow the same paths and have the same sense of what’s possible. To break out of established paradigms and established processes, you have to bring in some people who aren’t experts. When you get experts and other people to work together—I discovered there’s this whole other stress response that does imply we could potential double the market. That could really be interesting and fun to work on.