I have already established that it’s a hoot to play Beat Saber on the Oculus Quest wireless virtual reality headset, which debuted on Tuesday for $400.

It works almost as well as the Oculus Rift, though the graphics aren’t quite as good as the PC-connected VR headset. But the freedom you get from having no wires in an instantly-available standalone headset makes up for the lesser graphics. When it comes to standalone VR, it’s the convenience, stupid.

In a game like Beat Saber, I don’t care as much that the visuals aren’t quite as spectacular. It is the ease with which I can get up and running in VR that matters.

A few years ago, we were all tantalized by the promise of Palmer Luckey’s Oculus Rift. Facebook acquired Oculus and made it legit. But the ultimate product tied us to expensive PCs and it made us feel like we had an albatross around our necks. It was a disappointing bait-and-switch that left a lot of people with a bad taste in their mouths for the first generation of VR.

The Quest is not quite a new generation, as it has some weaknesses. But it is a lot more fun than I thought it would be. And it’s fun to show off to the kids. The Quest goes a long way toward fulfilling that original promise of VR, and gets it back on the right path of rapid improvement. 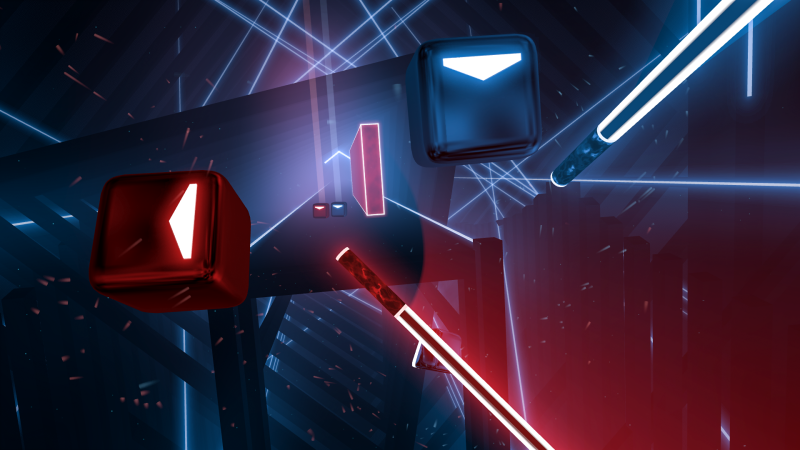 Above: Yes, I did play Beat Saber while singing, “Luke, Be a Jedi Tonight …”

Before, I had to use VR in the garage or set it up for brief play sessions in the living room and then take it down. My wife didn’t want those wires and sensors leading over to a big PC. So it was a temporary and kind of a big production to set it up for a visiting guest.

But now I can just pull it out of the charger, strap it on my head, and instantly start playing Beat Saber. It is easy to set up a Guardian, using the passthrough cameras, or cameras that show you what the room looks like without taking off your headset. The Guardian ensures you don’t hit the walls or TV set, and you don’t have to set it up every time.

Beat Saber is quite addictive, as it makes you feel like a fast-moving Jedi.

And we have another way to enjoy the lightsaber action. I played Vader Immortal: Episode One on the Quest. It was very well done as an original Star Wars story from Lucasfilm’s ILMxLAB. Dubbed an experience, it was a real attempt to tell a story in VR.

It was sadly short at 45 minutes, but just long enough to whet your appetite for swinging a lightsaber 360 degrees, with no limitations due to wires. You can learn how to fight in the training room and stay there for as long as you like if you’d really like to get your $10 worth.

The cool thing about playing a Star Wars game in VR is that Darth Vader actually does tower over you when he comes within a few feet of your face. I won’t spoil the story for Vader Immortal, but it was compelling enough to give me an excuse to pick up a lightsaber. A funny droid, dubbed ZOE3 and voiced by comedian Maya Rudolph, adds levity in those awkward silences when Vader approaches.

It was just the first episode and only a taste of the potential. But I thoroughly enjoyed my time swinging a lightsaber. The combat was a bit too easy. You get to fight dumb droids with lightsabers, not Lord Vader himself. But I thought it would be really cool to take on another human with some real saber skills.

Vader Immortal took a bit longer to load. But it was also quite convenient. And, like Beat Saber, it made me work up a sweat from swinging my lightsaber. This means that I could get a workout just about any time of the day. I hope that could be habit-forming. 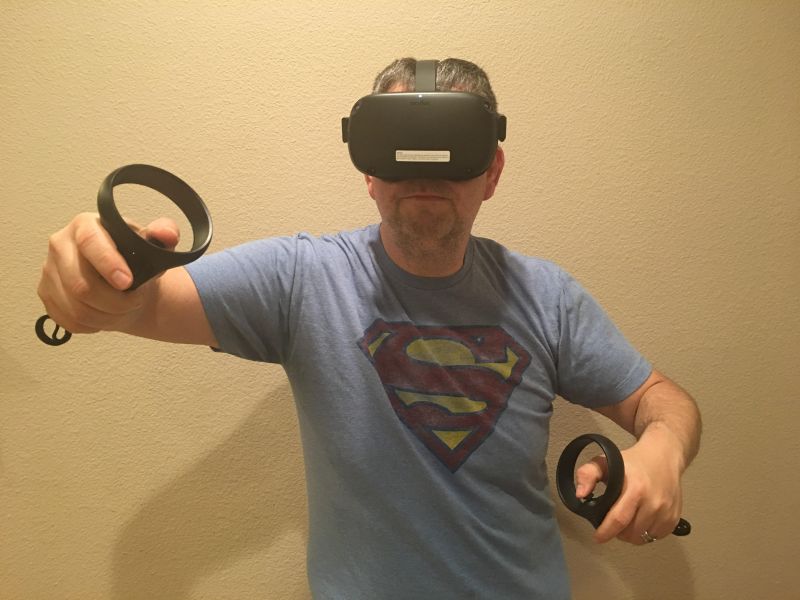 I’ve still got quite a few titles to try out, since more than 50 titles are supposed to be ready in this launch window. I visited some Game of Thrones locations in Dubrovnik via a 360-degree photo app.

I have run into a few annoyances. When I first strapped it on my head, I was tightening the side strap and I ripped it off. It could have been made of sturdier material.

The Vader Immortal app crashed on me once. And every now and then the headset tells me that I’ve lost an internet connection, only to tell me a few seconds later that I’m connected again. But those are small matters when you’re trying to get excited about the next generation of spatial computing.

It is hard for me to tell just how popular this will be. The Oculus Quest has compromises like lower-resolution visuals. It is also quite expensive for a gaming machine at $400. But freedom and convenience are very powerful features. And over time, this could

After all, I went face-to-face with Darth Vader. And this experience was fun. It wasn’t a full game, but it was a lot longer than Disneyland ride, and I didn’t have to wait four hours to get on it. If you’d like to get another perspective, check out my boss Jason Wilson’s review of the Quest.

Disclosure: Oculus provided me with a headset and games for this review. Our coverage remains objective.