Two brands made up almost three-quarters of the gaming industry’s recent TV ad impressions: Warner Bros. Games and PlayStation. Also notable is that two of the brands in our ranking, Focus Home Interactive and Respawn Entertainment, only ran one ad each during the period measured, but still managed to capture major eyeballs.

GamesBeat has partnered with iSpot.tv, the TV ad measurement and attribution company, to bring you a monthly report on TV advertising by the gaming industry. These are the ads, and by extension the games, that game makers are putting major muscle behind.

Below are the top five most-seen gaming industry TV advertisers from April 16 through May 15. 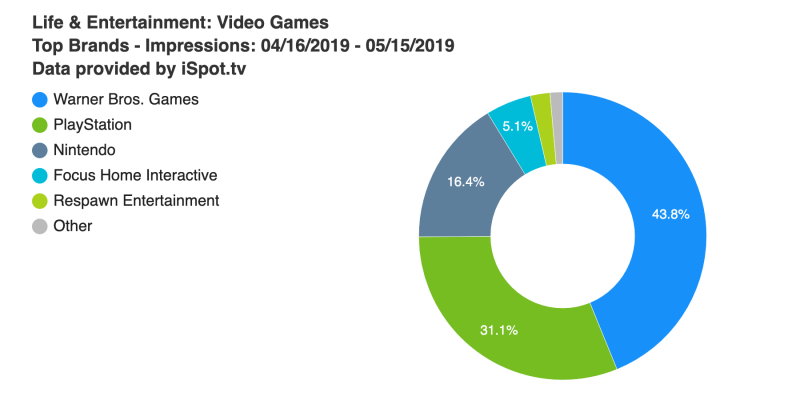 Overall, there were 1.4 billion TV ad impressions during the period measured, with 11 brands spending an estimated $20.5 million on 32 spots that aired over 5,400 times.

First-place finisher Warner Bros. Games generated 594.9 million TV ad impressions from three spots that aired over 1,900 times. Its most-seen commercial was “Mortal Kombat 11: Old Skool vs. New Skool,” with nearly 286 million impressions. Sports-themed programming led for the company: the NBA, SportsCenter, and the NHL top the list, while the networks generating high impression-counts included ESPN, TNT, and TBS. It got over 40% of views during this reporting period.

At No. 2: PlayStation, which aired two ads, both for Days Gone, over 1,200 times, resulting in 421.5 million impressions. “This World Comes for You” was the commercial with the most impressions (319.6 million) — both for the brand and the industry as a whole. SportsCenter, the NBA, and Get Up were three of the top programs for PlayStation, while ESPN, ESPN2, and TNT were among the networks with the highest impression-counts.

Focus Home Interactive takes fourth place with 69.4 million impressions generated by a single ad, “Take Them Down,” that ran 424 times. Ridiculousness, SportsCenter, and the NBA were three programs that ran up major impressions for the company, while top networks included ESPN, MTV, and Comedy Central.

Fifth place goes to Respawn Entertainment, which saw 29.7 million impressions from one ad, “Over 50 Million Players,” that aired 197 times. Three of the networks generating high impression-counts were ESPN, truTV, and Adult Swim, while top programs included SportsCenter, Impractical Jokers, and NBA: The Jump.