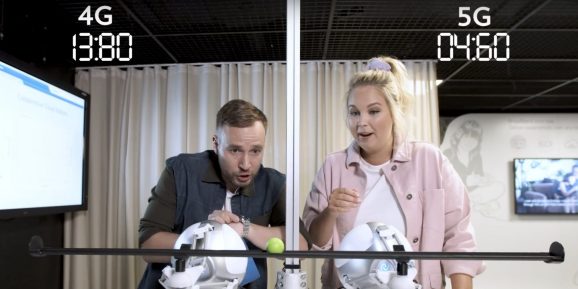 Finnish carrier Elisa has been working to establish its 5G bona fides for over a year, promising 5G networks in two Finnish cities by May 2018 and later proclaiming itself the world’s first to launch a 5G network, notably without actual 5G hardware. Having previously debuted 5G broadband services this April, the carrier today announced that it will start delivering mobile 5G services and phones in late June, including some interesting data plans.

Elisa says it will initially offer two 5G data speed classes: 1Gbps for €50 ($56) per month, and 600Mbps for €40 ($45) per month. Each will include unlimited data within Nordic and Baltic countries, and the “maximum speeds currently available” when users fall back onto 4G service.

However, the carrier says that in future its data pricing models will be “based on speed, but also latency, i.e. response time for different uses of customers.” While 5G is capable of imperceptible 1-millisecond responsiveness, it’s unclear what latencies Elisa’s current 4G or 5G services offer.

This is the first time a carrier has specifically said it plans to differentially charge for higher network responsiveness. Low latency — the time it takes for a network’s servers to respond to changing device requests for data — is one of the key features of 5G, and a special ultra-reliable low latency communications mode has been developed to guarantee the reliability and speed of 5G data for certain risk-sensitive transmissions. Factory, tele-surgery, and automobile coordination might be some of the applications using that feature, but depending on how Elisa segregates its services, there could be an upcharge for latencies enabling virtual reality, mixed reality, and other communications to be smooth.

Elisa is launching its 5G mobile service with two phones — ZTE’s Axon 10 Pro 5G, and OnePlus’s 7 Pro 5G — plus HTC’s 5G Hub, having already started presales of Huawei’s 5G CPE Pro home broadband modem in April. The carrier says it will actually deliver the 5G mobile services and phones at the end of June, using 5G networks that are up and running in Helsinki, Tampere, Turku, and Jyväskylä. It’s not yet known when Elisa will commence latency-related pricing or services.