Waterdeep is known as the City of Splendors, so it’s not surprise that a whole buncha bad folk from around Faerûn (and even beyond) want to take their slice out of the Crown of the North. So it’s time the answer the Open Lord’s call for adventurers in Warriors of Waterdeep, the Dungeons & Dragons mobile role-playing game launches today from Ludia for iOS and Android.

It’s a good time to for Warriors of Waterdeep’s global launch. D&D just launched Ghosts of Saltmarsh, its latest storyline. And Wizards of the Coast recently announced its next adventure plot — Baldur’s Gate: Descent into Avernus. You can find someone livestreaming or doing an actual play podcast about D&D any time these days. That all sets up Warriors of Waterdeep to be a fair shot at surviving a mobile gaming market in which 2.4 billion people play games, as Newzoo reported earlier this year. It’s also the first D&D game for mobile since DeNA’s short-lived Arena shut down in 2014.

Warriors of Waterdeep is a free-to-play turn-based RPG. You assemble a team of heroes and take on the monsters and other forces looking to do in the City of Splendors. It also offers player-vs.-player combat with teams of four heroes. You use equipment upgrades and level up your characters to get stronger. You can use gold, which is an in-game currency reward, or you can buy gems. 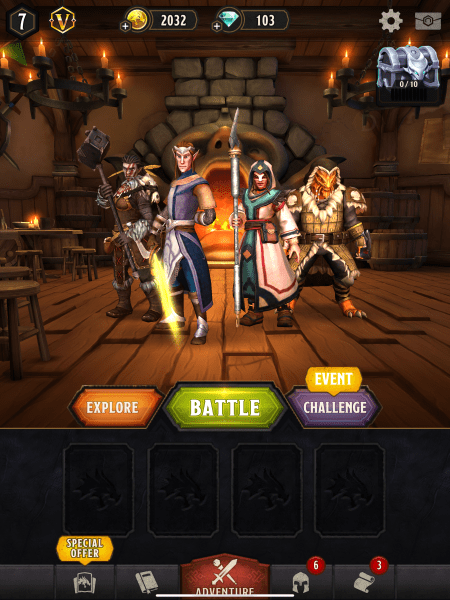 Warriors of Waterdeep tells its own story about helping Laeral Silverhand, the Open Lord of Waterdeep (and one of the famous Seven Sisters). Mirt the Moneylender, one of Waterdeep’s renowned rascals, handles the card-trading. Duran, the famous proprietor of The Yawning Portal Inn (which sits above an entrance to the infamous Undermountain megadungeon), runs the in-game shop. You defend Waterdeep. The story does have some Easter eggs and references to other storylines:

It offers eight characters among eight classes and player races. Above: Watch out for traps!

These are the in-game transactions, according to Ludia:

This is how you earn gold and equipment from lootboxes:

You can also get a VIP subscription for $10 a month. This gives you an equipment pack, a daily VIP chest, occasional coin and gem rewards, and an extra Brawl chest reward.

None of the modes are time-gated — the only timers are on Battle chests rewards.