If you’ve been following the new Oculus Quest VR platform, you probably already know that it officially hit stores last week, and that it’s legitimately impressive. I was skeptical that it could match the pre-release “Nintendo Switch of VR” hype, but that’s as close to an accurate, pithy description as I can get — across the board, as I’ll explain below. Given how many years it took for Nintendo, Sony, and Microsoft to establish themselves as platform makers, Oculus deserves a huge round of applause for creating a completely viable standalone VR platform in a relatively short period of time, and having a large launch library available.

That said, Quest’s pricing has left me with some buyer’s remorse, and I’m not sure if I’m going to keep the $499 unit I purchased for myself this weekend. Since Facebook gave a lot of Quests away — both to reviewers and everyone attending its F8 conference last month — you probably won’t see many articles with this perspective, but having purchased the hardware with my own money, I’d like to share some of the things that have been going through my head over the past few days.

As VR hardware goes, Quest is a new type of impressive

Over the past few years, each new round of virtual reality hardware has focused on visual and functional improvements over what came before; Valve’s new Index, for instance, is all about delivering high resolution, fast screen refresh rates, and premium tracking, no matter how high the cost or how many wires are required for all the components. Quest instead takes the Nintendo Switch route, compromising on visuals, dumping all the cables, and focusing substantially on convenience.

The result is a new type of “impressive” for VR — one that wows by making VR approachable, rather than hyper realistic. You can put on and adjust the headset in a flash, have the 6DoF wireless controllers instantly ready to go, and start using apps and games within seconds. Moreover, you can use Quest anywhere: Its inside-out tracking system creates maps of the places where it’s being used, even displaying a virtual “Guardian” cage around you so you can know where you can safely move while wearing the headset. 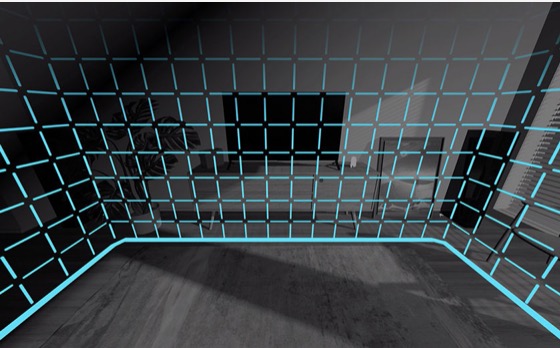 Above: Oculus’ Guardian system maps your room and creates a safe cage around you so that you don’t hit things while moving.

Even after using other VR headsets, setting up and starting to use Quest is just a little shy of amazing. The interface isn’t perfect, but it’s certainly on the road there, relying only a little on a smartphone for setup (get rid of that part, Oculus!) while displaying a wonderfully high-res, VR-optimized home interface that could benefit from only small bits of Apple-style simplification. Since the controllers are always being tracked by the headset and displayed as nearly photorealistic objects within the interface, you can locate and grab them even without taking Quest off your face.

Because everything works so quickly, comes on and off so quickly, and has a fairly seamless Oculus-developed interface tying it all together, Quest is the closest anyone has yet come to enabling the Ready Player One vision of ubiquitous VR — mobile-quality graphics capabilities aside, it does feel like the future of VR. The only time Quest completely fails is when it’s in a pitch-black room, making it hard (though not impossible, thanks to a buried toggle) to watch videos in bed. Conceptually, Oculus got almost everything else right with Quest.

I’d love to be able to stop right there and say that the Quest hardware is nearly perfect, but it’s not. Some users have complained about the headstrap’s fit and adjustability; others have opined that the materials don’t feel right on their skin, or noticed that there’s a visible nose gap that lets light in. Personally, I’ve had some of these issues, but would call most of them minor — except that those who paid $399 to $499 for the headset may then need to spend additional money to fix them.

From my perspective, the serious problems with the Quest hardware begin with the headset’s battery life, which ticks down too quickly after running an app or playing a game — users can expect a miserly two or so hours of run time between charges, even worse than the marginal run time of a Switch under heavy load. Some of the Quest’s early adopters have dismissed this issue by strapping giant spare battery packs to the backs of their heads (and even claiming it increases the headset’s comfort), but the stock headset feels under-equipped for normal usage away from a power outlet. 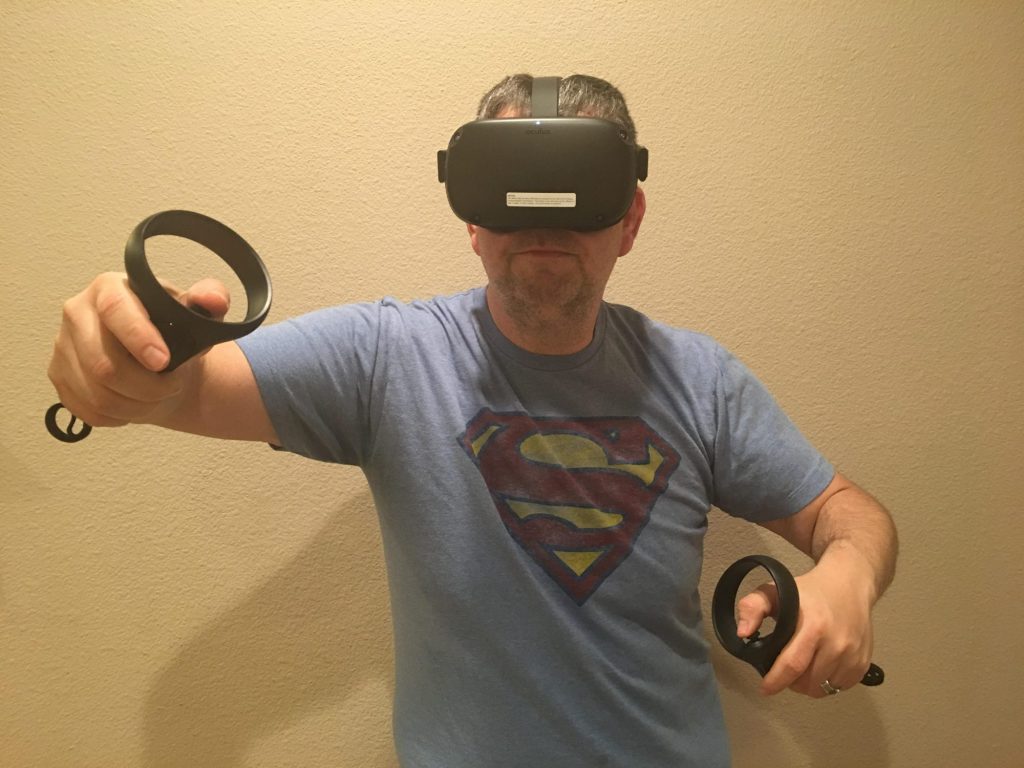 Above: GamesBeat’s Jason Wilson tests the Oculus Quest and its impressive controllers.

Quest’s otherwise excellent twin controllers have a different issue: They’re non-rechargeable. Oculus bundles two AA batteries in the box, one for each controller, and they should be enough for multiple days, perhaps weeks, of play. But the absence of rechargeable cells and an included charging station feels like it’s by design, and another future expense just waiting to be dealt with.

There are some other small but concerning hardware issues that I suspect will get fixed in later manufacturing runs. Like some Reddit users, I’ve noticed occasional graphics artifacts in the visuals, and static in the 3.5mm audio jack that can be used for headphones if you don’t want to rely on Quest’s integrated — and very externally audible — near-ear speakers. If and when these issues get resolved, I hope that Oculus doesn’t leave early Quest adopters behind.

The single biggest reason I’m considering returning my Quest is the software pricing. On one hand, I can understand why Oculus didn’t want to reveal the prices until just before Quest’s launch — different users are going to see them as crazy in unusual ways. But as someone who would really enjoy having a library of games and “experiences” to play on Quest, I feel like having a public pricing discussion earlier would have given developers the chance to gather feedback and make adjustments before early adopters said “no way.”

A lot of Quest’s games seem crazy expensive, especially given how many of them are ports — downgraded ports — of older titles from other platforms. Games that have been on Steam or Sony’s PlayStation Store for two years are selling for higher prices on Quest. Meanwhile, there are brand new “experience” and “story” titles like Vader Immortal that initially seem crazy cheap, but may only deliver an hour or two of actual play time.

Above: Vader Immortal is one part of a multi-part Star Wars VR story, available for Quest.

Would you buy one part of a three-part Star Wars story for $10, knowing that you might spend less than two hours actually using it? How about spending $30 for a game that you’ve already played or purchased on another VR platform for $15? And what’s the deal with charging $15 for Fruit Ninja, an eight-year-old mobile phone game that has effectively been free for most of its life?

The good news is that Oculus offers full refunds for any game you have spent less than 2 hours actually using, so you can effectively demo anything and ditch whatever you don’t like. But my first visit to Quest’s store was largely a “whoa, I don’t know that I want to pay that” set of experiences, and almost nothing seemed right-priced to me.

I understand Oculus’s explanation that a lot of these titles are going to be new to Quest buyers — VR first-timers — which is why it’s trying to set day one Quest prices similarly to day one prices for other platforms. But I’m not sure how that’s actually playing out in reality. My guess is that there are several different types of people buying Quests, some of whom will be OK paying these prices, while others will look at the games and see a mix of aging smartphone and console experiences at “like new” prices. Above: The early smartphone game Fruit Ninja (shown) has come to Quest … at a higher price.

Developers may wrongly assume that they’re doing well with a small number of sales at these prices, when they could be selling many more copies at more reasonable ones. If and when they bring completely new titles to Quest, prices like these will make more sense to everyone, not just people who are willing to double-dip.

Given that Quest starts at $399, I suspect that a lot of the early adopters are not actual VR first-timers, but people who have invested in prior VR platforms and software. Oculus is catering to some of them with Rift/Quest cross-purchasing if a developer wants — some do, some don’t — but if you didn’t have a Rift library, you’re out of luck and need to start fresh with Quest.

That’s not a huge surprise, but it’s another trigger for buyer’s remorse. As much as I would like to be playing some of these games on Quest, even in an obviously visually downgraded form, I can’t bring myself to pay again for the same titles. Obviously, your mileage may vary.

Will I keep or return Quest? Tune in next week

Over the next week, I’ll decide whether to keep or return Quest, and at the moment, I’m really on the fence. While I’m impressed by the overall package and in awe of how well Oculus built both Quest’s OS and the Guardian system, I’m not sure whether there are enough experiences to really keep me busy with yet another platform. Is it worth $430, including tax, just for a dedicated Beat Saber device, or should I just play the same game on my PSVR instead? (My personal testing of Quest titles is just starting.)

I’m interested to hear thoughts from readers who have purchased Quest (tweet me: @horwitz), and I know you’re out there. The system appears to have sold out nationwide during its first weekend, which even in the absence of sales numbers is a good sign for any fledgling product — though as history’s pile of dead consoles will confirm, it’s no guarantee of long-term success. Building a solid user base for this brand new platform will require Oculus to have the right pricing and upcoming software releases to prevent buyer’s remorse, lest a significant number of those early sales turn into mass returns.