Somewhat confusingly, the next Call of Duty will be called Modern Warfare. But this new entry, which comes out on October 25, will not be a continuation of the story that Infinity Ward had been telling up through 2011’s Modern Warfare 3.

Modern Warfare is coming out for PC, PlayStation 4, and Xbox One. Just like Black Ops 4, it will be available on PC through Blizzard’s Battle.net launcher. And as a first for the series, the shooter will have crossplay support. Friends and strangers can play together no matter what platform they’re on. The studio is also ditching the traditional season pass model for the game’s post-release content. Instead, Infinity Ward is noting that more maps will be offered to everyone for free to all players.

This Modern Warfare is a reboot of the subseries. Aside from featuring a new take on fan-favorite, mustache-spotting soldier Captain Price, this game has little in common with its predecessors. Instead of focusing on a Hollywood-style portrayal of war, this Modern Warfare will feature scenarios “ripped from the headlines,” including things like infiltrating a terrorist headquarters while methodically killing the men and women holed up in it.

Infinity Ward itself describes the single-player campaign as “edgy, culturally relevant and thought-provoking.” Having a single-player component at all was not a given, as last year’s Call of Duty: Black Ops 4 abandoned a traditional campaign in favor of more multiplayer offerings like a battle royale mode an extra emphasis on the zombies cooperative experience. 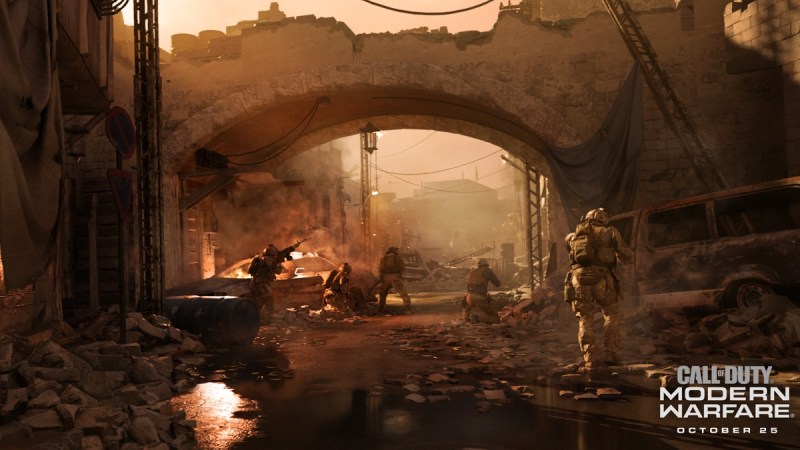 Other scenarios include a terrorist bombing in London, and the perspective of a young boy suffering through the death of his family as Russian soldiers wipe out his village. It’s all dark and gritty, and it marks a tonal shift from what we usually get from Call of Duty.

We don’t have too much info on the multiplayer components of the game yet, although Infinity Ward is noting that it will share a progression system with the campaign and a new cooperative mode.