Mojo Vision has revealed its Mojo Vision 14K pixel-per-inch display, which makes it the smallest, densest dynamic display ever made.

The Saratoga, California-based company unveiled the monochrome prototype at the Augmented World Expo event in Santa Clara, California. I saw a demo of it, peering at the moving images on a dot via a microscope. It looks like they’re putting their $108 million in funding to good use.

The screen makes it a candidate for ultra-small and dense augmented reality and virtual reality displays. The prototype powers tiny pixels, with a pixel density 300 times greater than current smartphone displays. Mojo Vision can put 15 pixels in a space the size of a red blood cell.

When I looked at it through the microscope, it was pretty clear. It was green, like the way you see in night vision equipment, and it’s conceivable it could be used for that, said Steve Sinclair, senior vice president of product and marketing at Mojo Vision, in an interview with VentureBeat.

The display uses MicroLEDs, a technology expected to play a critical role in the future development of next-generation wearables, AR/VR hardware, and heads-up displays (HUDs).

“It is information when you need it, and it’s not there when you don’t,” said Sinclair. “We call it invisible computing. A lot of folks are focusing on MicroLEDs. It’s a good candidate for near-eye solutions. It can be used outdoors. Power is a consideration. And we drive the size of the pixels as low as possible.” 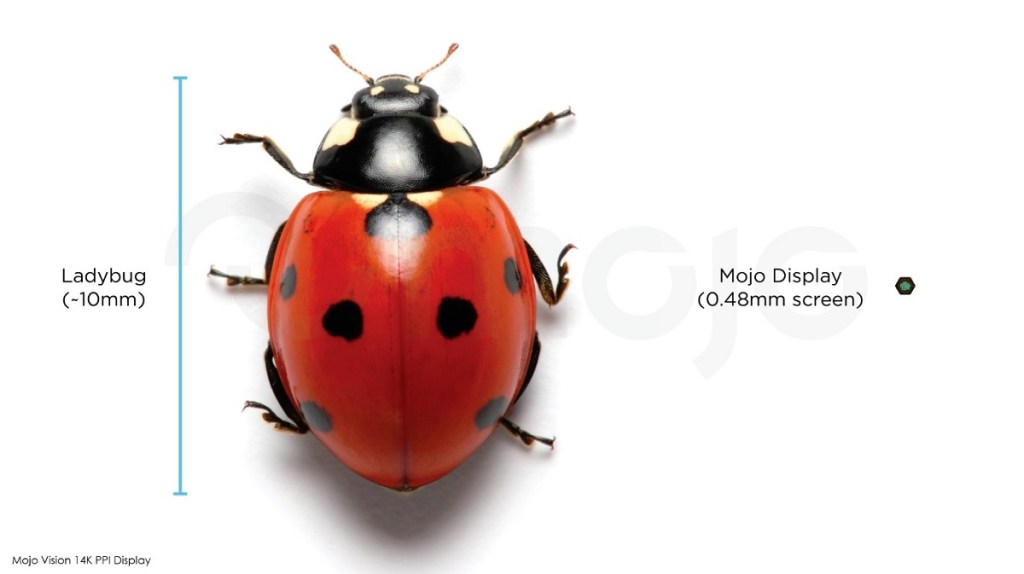 Above: Mojo’s displays are really small.

MicroLEDs use 10% of the power of current LCD displays, and they have five to 10 times higher brightness than OLEDs. That means that MicroLEDs enable comfortable viewing outdoors.

Sinclair previously worked at companies like HP and Apple. He was a product manager for the iPhone division for six years. He declined to say exactly what the displays will be used for.

He said the technology breakthrough is critical to Mojo Vision’s development of augmented reality solutions that will fundamentally alter the future of computing and communications. The company is exploring new ways people can receive and share information that is immediate and relevant but doesn’t distract their attention from the world in front of them.

Mojo envisions the future of computing — invisible computing — which imagines a world where information is there when you need it, technology fades away, and you can freely connect with others in a more meaningful and confident way.