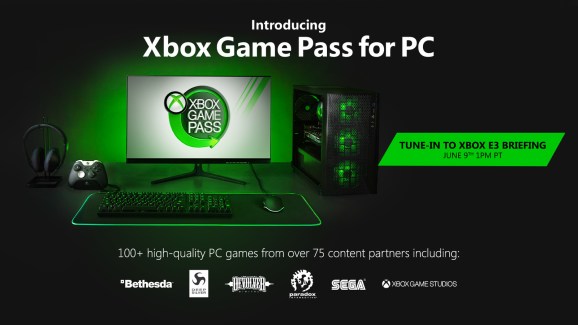 The Electronic Entertainment Expo (E3) begins in under two weeks, but companies aren’t saving all their news for that event. E3 leans toward consoles over PC gaming, and it’s crowded with announcements. With that in mind, Microsoft reached out to PC gamers with a handful of reveals today. These include new ways to buy games and the anticipated launch of an Xbox Game Pass for Windows.

All of Microsoft’s announcements fit a theme: How people can purchase and acquire games. The Microsoft Store, for example, is going to begin getting Win32 games. Prior to this, you could only get 64-bit apps on that platform.

“We recognize that Win32 is the app format that game developers love to use and gamers love to play,” Xbox boss Phil Spencer wrote in a blog post. “So we are excited to share that we will be enabling full support for native Win32 games to the Microsoft Store on Windows. This will unlock more options for developers and gamers alike, allowing for the customization and control they’ve come to expect from the open Windows gaming ecosystem.”

The publisher also committed to continue bringing its games to the popular Steam distribution platform. It also hinted that it could expand to other stores as well.Like with Minecraft and Cuphead on Nintendo Switch, Microsoft sees this as a chance to expand the reach of its in-game services.

But it’s all about Xbox Game Pass

Xbox Game Pass is a central pillar to the future of Microsoft and gaming. Now, the PC is getting a slightly modified version of its own.

“Xbox Game Pass for PC will give players unlimited access to a curated library of over 100 high-quality PC games on Windows 10,” reads Spencer’s blog. “[This includes games] from well-known PC game developers and publishers such as Bethesda, Deep Silver, Devolver Digital, Paradox Interactive, Sega, and more.”

Like with the console version, Game Pass for PC is getting Xbox Game Studios releases on the day of their release. Microsoft is working with 75 developers and publishers to bring games into this service.

But what kinds of games? Well, Spencer says he’ll share more on that soon.

“We know that PC gamers want to see games,” reads the blog. “So I hope you’ll join us at our annual Xbox E3 2019 Briefing on Sunday, June 9 to hear more, including the amazing lineup of new games and offers coming to PC players.”

Microsoft is also waiting until E3 to get into some of the details of the Xbox Game Pass for PC. For example, it hasn’t said when it’s launching or how much it costs. It also hasn’t said whether you’ll have to pay separately for Game Pass on console and PC. We’ll have more info soon, and I’m looking forward to reevaluating Microsoft’s subscription service once it officially debuts on PC.