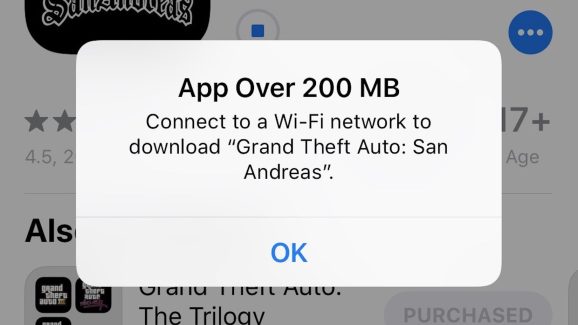 Back when downloads from Apple’s own servers were iPhone users’ biggest hits on cellular networks, the company set cellular download limits to ease the strain on carrier partners: 10MB, then 20MB, then 50MB early in the 4G era, jumping to 100MB in 2013 and 150MB in 2017. This week, the company has again modestly raised the bar to allow 200MB cellular downloads from its own stores (via 9to5Mac), a change that will allow users to grab slightly larger iTunes and App Store files without using Wi-Fi.

Although users are the primary beneficiaries of each of these changes, each boost is largely targeted at app developers, who sometimes struggle to squeeze their initial installation bundles into packages at Apple’s limits. Because the download limit covers the “slice” of an app that is actually delivered to a specific device, the sub-200MB iPhone-ready slice of a 298MB app such as Pokémon Go will download without complaint, and other developers will gain the ability to create somewhat more complex bundles for initial installation.

Given how much downloading has changed over the years and how developers have worked around the prior limits with post-installation downloads, it’s not entirely clear why Apple continues to maintain such stingy caps at all. Users now stream vast quantities of audio and video content over cellular connections, in some cases wasting plenty of data listening repeatedly to favorite songs that might otherwise be stored — even temporarily — on their devices.

Moreover, as 4G networks transition to 5G technologies, users will be able to regularly transfer 200MB files in a second or less. Apple is at least a year behind the curve in adopting 5G, but its latest phones support LTE Advanced, a bridge technology with up to 1Gbps download speeds — enough to transfer a 200MB file in under two seconds. Early 5G networks have been advertising peak download speeds in the 1-2Gbps range, with the ability to download entire multi-episode TV seasons in a minute or less.

It’s likely that Apple will up the limit again over the next two years as higher-speed 4G and 5G becomes more commonplace, making the 200MB cap look as ridiculous as the 10MB and 20MB caps do today. For users, the result may well be larger app file sizes but also more freedom to grab both apps and media files wherever they may be, regardless of whether they have access to Wi-Fi.