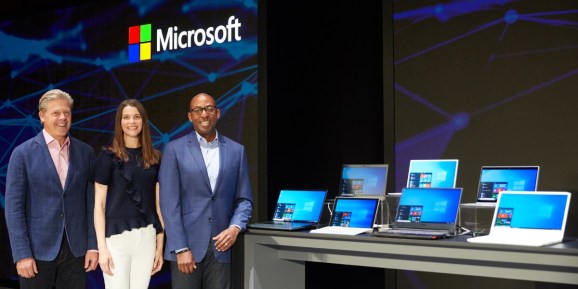 Microsoft hosted a keynote at Computex 2019 this week. As always, the company talked up the latest Windows 10 hardware. But then Nick Parker, Microsoft’s corporate vice president of consumer and device sales, started to describe a “modern OS.” He wasn’t talking about Windows 10.

The keynote wasn’t livestreamed, but Parker kindly summarized it all in a blog post with the same title: “Enabling innovation and opportunity on the Intelligent Edge.” The post includes a 321-word paragraph describing the mythical modern OS.

No operating system offers this. This is not Windows 10 or anything else that Microsoft has coming soon.

Computex is the key

When I first read the paragraph, I will admit that Chrome OS came to mind. A few of the components are eerily familiar to Google’s Chromebook pitch. But after I broke out the text into individual points, it became clear there is a lot more here. This is a wish list.

Is Microsoft working on a “modern OS”? Absolutely. That said, even if tomorrow the company released a major Windows 10 upgrade, the rumored “Windows Lite,” or a completely new version of Windows, it wouldn’t check all the above boxes.

How do I know? We would have seen it in the hardware this week. Plenty of new devices were shown off at Computex 2019. All of them were running Windows 10. None of them matched Microsoft’s modern OS vision.

Microsoft’s keynote was a look at what exists and what could exist. Maybe at Computex 2020 we’ll start to see this vision come to fruition. But only start.